Peru and UNODC expand the container control program in seaports 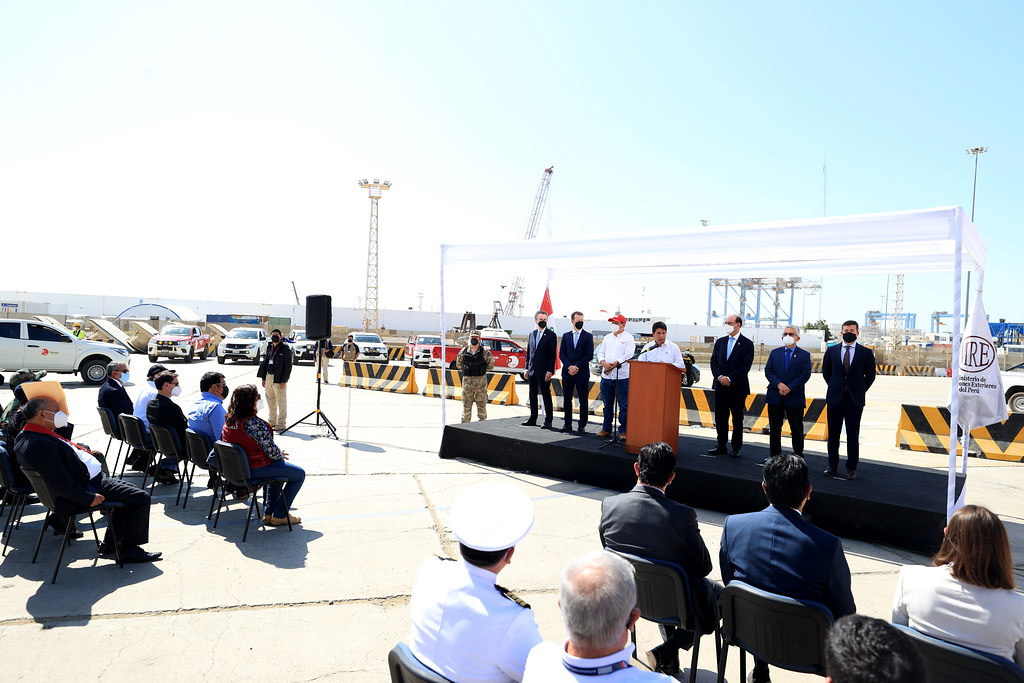 President of Peru, Pedro Castillo, speaking at the inauguration of the two Joint Control Units.

Piura (Peru), July 13, 2022 — Approximately 90% of world trade is carried out through maritime containers, of which more than 780 million are delivered annually in the trade supply chain. Of this amount, less than two per cent are subject to verification, meaning that 98 per cent of containers could be holding illicit drugs or products.

In an effort to reduce the volume of containers exposed to contamination with illicit drugs or other illegal products, the President of Peru, Pedro Castillo, the Minister of Foreign Affairs, César Landa, and the United Nations Office on Drugs and Crime Representative for Peru and Ecuador, Antonino De Leo, inaugurated two new Joint Control Units in the ports of Paita and Matarani as part of the UNODC-World Customs Organization (WCO) Container Control Programme (CCP).

The ceremony, which took place in the port of Paita on July 8, also brought together the Executive President of the National Drug Commission, (Devida) Ricardo Soberón, the President of the Board of Directors of the National Port Authority, Manuel Gilberto Hinojosa, as well as the Ambassador of the United Kingdom, Gavin Cook, and the Second Secretary of the Embassy of Canada, Jean-Denis Dufour, among other authorities.

The CCP supports national efforts to improve port security in the country, particularly in the fight against illicit trafficking in drugs and other illicit goods, by building capacity to efficiently profile and control cargoes with minimal disruption of operations. In addition to the two new Joint Control Units established in the ports of Paita and Matarani, the joint UNODC-WCO programme has been operational in the port of Callao since 2017.

“We have made the decision to reinforce interdiction tasks in the port areas. The start of operations in Paita and Matarani will contribute to strengthening actions against illicit drug trafficking," said the Head of State while acknowledging the support and technical assistance of UNODC.

According to the World Drug Report presented by UNODC on 27 June, almost 90% of the cocaine seized worldwide was trafficked in containers and/or by sea.

In this respect, the Peruvian Foreign Minister stated that "it is not surprising that the enormous volume of containers that transit through Peru is exposed to contamination with illicit drugs and other illegal products." He added: "One of Peru's commitments is to prevent drugs from reaching their destination and our coastal strip has been identified as one of the Strategic Areas of Intervention for the implementation of the National Policy against drugs towards 2030”.

The UNODC Representative for Peru and Ecuador highlighted the proactive role of the Ministry of Foreign Affairs and Devida, as well as the important technical work of the National Superintendency of Customs and Tax Administration (Sunat), the Anti-Drug Directorate of the National Police and the Port Authority.

“The CPP will allow finding the needle in the haystack, enabling inter-institutional cooperation, improving internal risk management capacity, supply chain security and trade facilitation at seaports, airports and land border crossings to prevent and detect the cross-border movement of illicit goods,” said Mr. De Leo, while thanking the financial support provided by the Government of Canada and as well as the in-kind contributions of the Government of the United Kingdom.

The CCP carries out operations in 20 countries of the Latin America and Caribbean region through the establishment and work of 32 port control units. In the first six months of 2022, these units have participated in the seizure of over 90 tons of cocaine.

The mission of the UNODC-WCO Container Control Programme (CCP) is to build capacity in countries seeking to improve risk management, supply chain security, and trade facilitation in seaports, airports and land border crossings in order to prevent the cross-border movement of illicit goods. Learn more here.