Prisoner rehabilitation in Uganda: supporting the application of the Nelson Mandela Rules 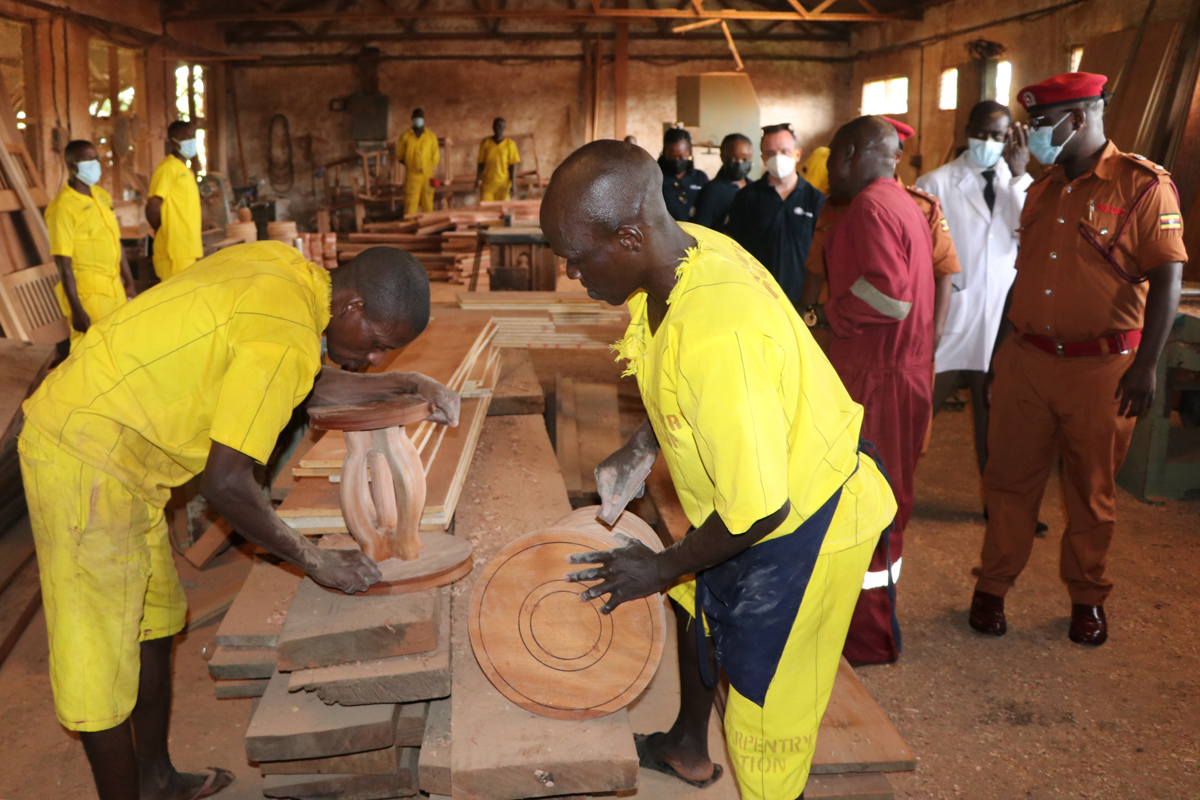 Luzira (Uganda), 27 July 2022 – An estimated 11.7 million people are behind bars globally – a figure that has increased 25% since 2000. With rates of incarceration skyrocketing, the fair and humane treatment of prisoners is a pressing concern for societies around the world.

Nelson Mandela, the late president of South Africa, spent 27 years of his life behind bars and became a global advocate for the humane conditions of prisoners. As he famously declared, “it is said that no one truly knows a nation until one has been inside its jails. A nation should not be judged by how it treats its highest citizens, but its lowest ones.”

In recognition of the importance of prisoner rights and treatment, in 2015 the United Nations (UN) General Assembly adopted the Nelson Mandela Rules, or the revised UN Standard Minimum Rules for the Treatment of Prisoners. The Rules outline minimum prison conditions, provide guidance, and set benchmarks for prison staff on how to uphold safety, security, and human dignity.

On 18 July 2022, the world came together to mark International Nelson Mandela Day, and the Group of Friends of the Nelson Mandela Rules met to launch the UN Office on Drugs and Crime (UNODC)’s toolkit on the Rules.

Below, find one man’s story of how a rehabilitative approach can make a difference in Uganda, one of the newest states (along with Ghana and Kazahkstan) to join the Group of Friends on Nelson Mandela Day 2022.

Patrick's story: "When I am outside of this place, I will live a healthy life”

In 2009, as Patrick Mugume went about his work at one of the garages in central Uganda, he got a tip off that his girlfriend was seeing another man. He dashed home and, in a fit of anger, attacked the couple, killing his girlfriend. Then-19-year-old Mugume was charged with murder and sentenced to 20 years in jail.

By the time COVID-19 broke out in March 2020, Mugume had been moved to a prison in rural Uganda. To contain the spread of the virus, visits were restricted, sanitary measures were introduced, and the Uganda Prisons Service (UPS) had rolled out a vaccination drive.

However, the prison population keeps changing, with departures and arrivals on a daily basis. To help fill the gaps, UNODC provided logistical support to increase the vaccination of prisoners.

The drive was in line with the Nelson Mandela Rules, which require that ‘prisoners should enjoy the same standards of healthcare that are available in the community and should have access to necessary healthcare services, free of charge, without discrimination on the grounds of their legal status.’

Mugume benefited from the vaccination drive in May 2022. He recalls the fear that had gripped prisoners and prison staff watching reports of COVID deaths in Uganda and around the world. “The vaccination is now helping us. I give credit to the donors,” Mugume said. “Tomorrow, when I am outside of this place, I will live a healthy life,” he added.

In addition to supporting the vaccination drive, UNODC provided medical equipment, including oxygen airflow splitters, patient masks and regulators as well as overalls, face shields and oxygen cylinders. UNODC also provided a clinic in Masindi district in mid-western Uganda with specialized equipment, ensuring that services would be available for prisoners, staff and the community unable to travel due to pandemic restrictions.

The primary purposes of a prison sentence are to protect society against crime and to reduce reoffending. Those purposes can only be achieved if a prisoner’s period of imprisonment ensures their reintegration into society upon release. UNODC uses the Nelson Mandela Rules on correctional, not punitive, measures for prisoners during capacity-building events with UPS to strengthen rehabilitation services.

As part of his rehabilitation, Mugume completed a diploma in entrepreneurship and was introduced to commercial agriculture practices.

“The deputy officer-in-charge of this place has mentored me and encouraged me to get extra skills. I have learned that you can set up a plantation and earn a monthly income of up to UGX 2 million (about USD 530),” Mugume explained.

In April 2022, following extensive training, UNODC gave an assortment of information and communication technology equipment to UPS to facilitate the piloting of prisoner classification. This is a key element in handling violent extremist prisoners and preventing radicalization to violence within prisons. The pilot is being carried out at six prisons across Uganda.

“Uganda Prisons Service is now in a position to understand these prisoners, engage with them, rehabilitate them, and then finally, after they have served their sentences, resettle them,” Mr. Wilson Francis Magomu, UPS Commissioner for Safety and Security Operations, said at the end of the.

According to Ms. Sharon Nyambe, UNODC’s head in Uganda, “Our work is anchored on our partnership with the justice actor institutions to ensure they respect the Nelson Mandela Rules, and the principle that while imprisonment constitutes a deprivation of the basic right to liberty, it does not restrict other human rights.”

The complete text of the Nelson Mandela Rules is available here.