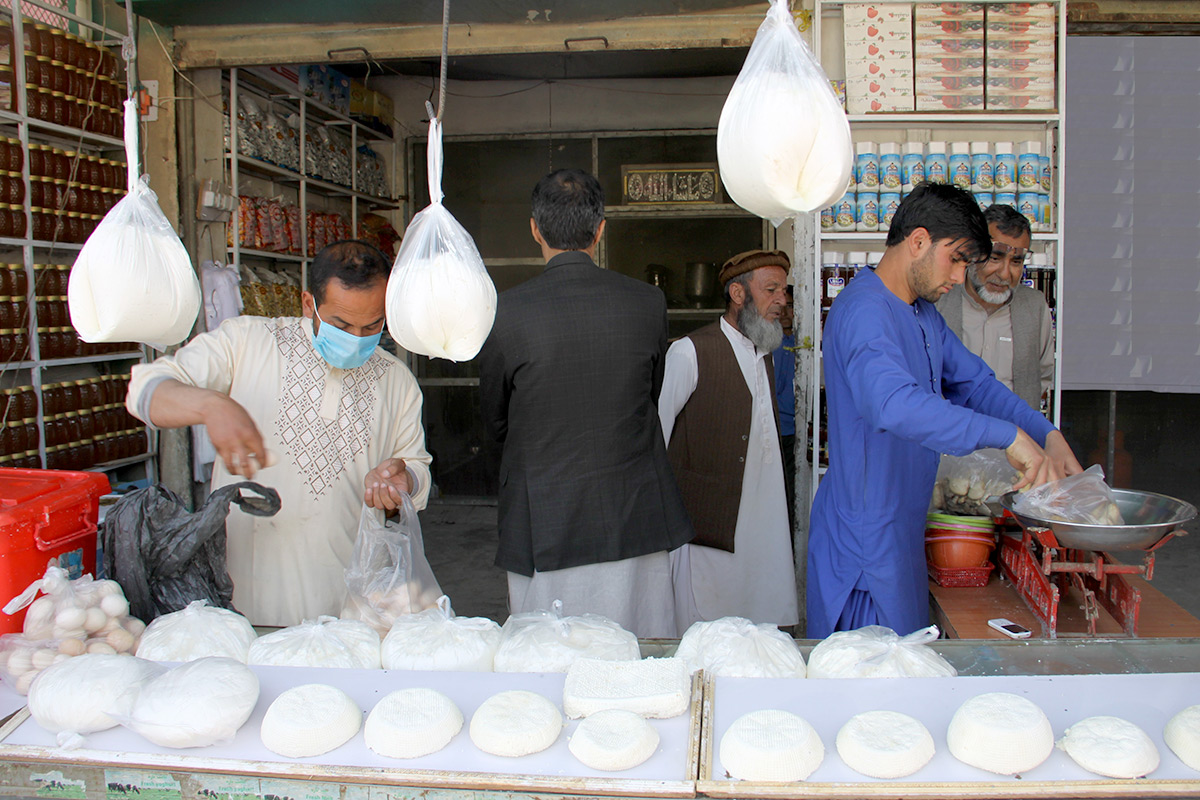 Abdul Rahman and his sons are selling dairy products.

Households in Panjshir, a mountainous province in central Afghanistan, often struggle to make ends meet. Traditional occupations, such as farming and livestock raising, don’t always provide sufficient income, causing youths and other labourers to migrate to the south and northeast of Afghanistan to work for poppy farmers.

Low-income communities like those in Panjshir are indeed vulnerable to starting or contributing to illicit, drug-crop cultivation. By providing sustainable livelihood options, the UN Office on Drugs and Crime (UNODC)’s Alternative Development (AD) programme aims to prevent these communities – who may be unable to obtain sufficient income from legal activities due to lack of markets, conflict, marginal land, and absence of basic infrastructure - from turning to illicit drug production.

The situation in Panjshir began evolving after the introduction of an AD programme, when many households began reaping the benefits of having their home-grown and homemade products linked to local markets.

Abdul Rahman, who used to own a small milk booth selling butter, milk, and more, is one such beneficiary of the AD program. In 2019, UNODC helped establish a Milk Collection Centre (MCC), which links milk farmers with milk processors and markets, in his neighbourhood.

Through the AD programme, Rahman received dairy processing equipment – including refrigeration, processing instruments to produce cheese, and tools to test if milk has spoiled. He also received training on milk processing on how to manage the MCC, as well as access to markets.

As a result, Rahman upgraded his small milk booth to a bigger shop where he now sells several kinds of dairy products and eggs. With a motorbike provided by the programme, he is able to collect and transport products directly from the doorsteps of the local poultry and dairy entrepreneurs on a daily basis.

Abdul Rahman is not the only one who has prospered from this arrangement. Many local entrepreneurs, who previously did not have a sustainable market at which to sell milk and eggs, have growing businesses now that they have a guaranteed buyer in Rahman. He, in turn, can provide his customers with high quality and diverse dairy, as well as other homemade products.

The women entrepreneurs of Panjshir province have particularly benefited from this intervention. The thriving MCC in their neighbourhood allows them to sell eggs and milk to a reliable buyer. As a result, they are able to contribute to their household expenses to improve their own socio-economic circumstances.

When the AD Programme was phased out in 2020, beneficiaries continued to utilize the knowledge and training they had received to manage and earn from their enterprises.  When the political situation in Afghanistan changed in August 2021, for example, communities across the country were impacted both socially and economically. While the situation became difficult for Abdul Rahman and his community, the MCC continues to be a source of income and nutrition. The skills acquired from the project allowed Abdul Rahman not only to support his household but also those of his suppliers, from whom he continues to buy milk and eggs, even during leaner times.

Each MCC has the capacity to process 500 litres of milk per day and 15,000 litres per month, which converts to around AFN 40,000 net incomes. The UNODC AD Program has established 17 such district-level MCCs in the central region, all of which continue to stay resilient and sustainable during this conflicted time in the country.

And with the recent decree announcing an opium ban by the de facto authorities, the AD food security program is needed more than ever before.

UNODC's alternative development approach is based on the idea that illicit drug supply can only be reduced successfully by addressing illicit drug crop cultivation through poverty reduction within a framework of sustainable development. Learn more here.