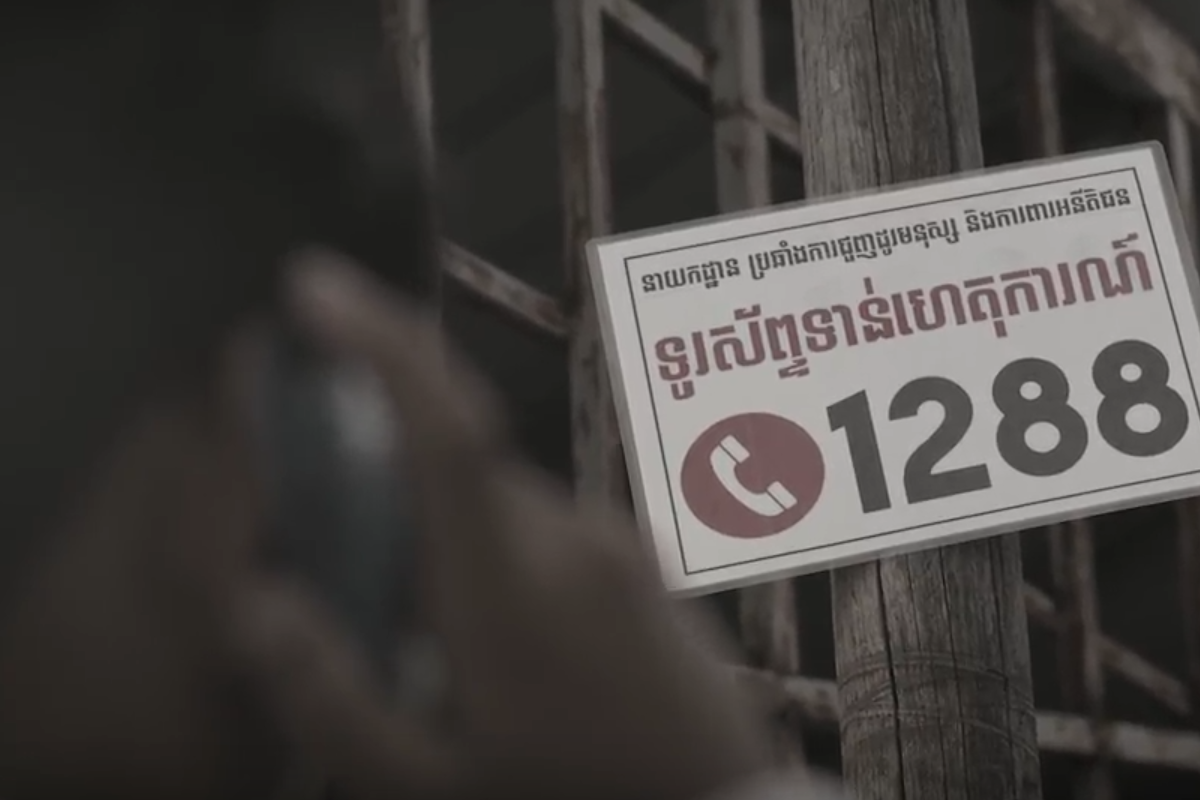 Phnom Penh (Cambodia), 21 July 2022 — On a narrow street in Phnom Penh, Cambodia at dusk, a woman is diligently tidying her food cart, from which she has been selling noodle dishes all day long. The camera lingers over her arms as she cleans, highlighting red burn marks.

Her son, crouched at her feet, alerts her: “Mom, Dad is drinking again. He might cause trouble.”

The woman glances over at her husband, who is sitting cross-legged with his friends further down the alleyway. She notices a local police officer approaching the group and heaves a resigned sigh. “Even the cop is there…how can I rely on the authorities if something bad happens?”

Finished with her chores, she trudges the path home, passing by a sign imploring those who need help to dial the number 1288, but dismisses it. “That could be a drug dealer’s secret code, who knows?” she thinks to herself.

1288 is, in fact, the number for Cambodia’s new Anti-Human Trafficking and Juvenile Protection Office Hotline and the sign was posted by the police officer. The woman’s son, who had also seen the sign, called the number later that night after discovering his mother unconscious; she had been beaten by her husband.

The hotline is part of Cambodia’s National Action Plan for the Prevention of Violence against Women 2019-2023, and this short film is part of its new public information campaign, developed and implemented by the United Nations Office on Drugs and Crime (UNODC)’s Regional Office for Southeast Asia and the Pacific, and generously supported by the German Federal Foreign Office.

Domestic or intimate partner violence – which includes physical, sexual, or emotional abuse – is the most common type of violence against women in Cambodia. One in five women in Cambodia between the ages of 15 and 49 have experienced physical violence. And according to the Cambodia Centre for Human Rights, incidents of violence increased during the COVID-19 pandemic.

The situation in Cambodia echoes the gravity of the problem worldwide. According to UN Women, an estimated 736 million women have been subjected at least once in their life to physical and/or sexual intimate partner violence, non-partner sexual violence, or both. Over 58 per cent of the 81,000 women and girls killed in 2020 died at the hands of an intimate partner or family member.

The public information campaign aims to educate Cambodia’s population about the consequences of gender-based violence and the services available to victims. Through a set of public service announcements, vulnerable populations – particularly women – are cautioned that “tolerating violence is not the way to protect people you love” and that “a bouquet of flowers shouldn’t be able to buy your silence.”

Through these messages, as well as a set of posters, animations, quizzes, and social media posts, they are implored to not “suffer in silence alone”, reminded that “help is always available to you” and directed to law enforcement and safety resources.

After the success of the campaign in Cambodia’s capital Phnom Penh, UNODC is considering expanding it across the country, by training first-responder police officers on gender-responsive police services or procuring equipment for the hotline center at the Cambodia National Police. Furthermore, UNODC will support the police force in leveraging its data to create valuable and action-oriented strategies.

Comprehensive and multi-sectoral solutions are required to end all forms of gender-based violence against women and girls by 2030, in line with Sustainable Development Goal 5.2. Crime prevention and criminal justice responses are a key part of this approach. Learn more about UNODC’s work on gender-based violence here.