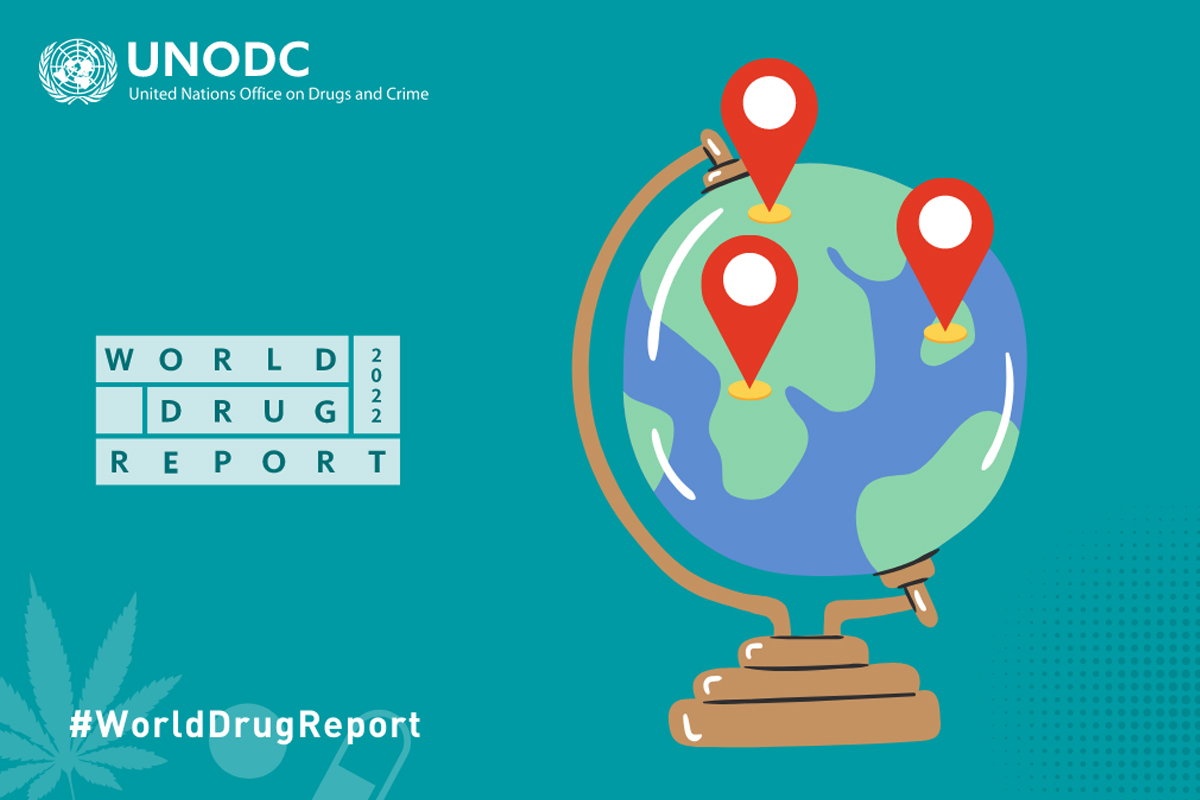 Vienna (Austria), 27 June 2022 - Cannabis legalization in parts of the world appears to have accelerated daily use and related health impacts, according to the UN Office on Drugs and Crime (UNODC)’s World Drug Report 2022. Released today, the report also details record rises in the manufacturing of cocaine, the expansion of synthetic drugs to new markets, and continued gaps in the availability of drug treatments, especially for women.

According to the report, around 284 million people aged 15-64 used drugs worldwide in 2020, a 26 per cent increase over the previous decade. Young people are using more drugs, with use levels today in many countries higher than with the previous generation. In Africa and Latin America, people under 35 represent the majority of people being treated for drug use disorders.

Reacting to these findings, UNODC Executive Director Ghada Waly stated: “Numbers for the manufacturing and seizures of many illicit drugs are hitting record highs, even as global emergencies are deepening vulnerabilities. At the same time, misperceptions regarding the magnitude of the problem and the associated harms are depriving people of care and treatment and driving young people towards harmful behaviours. We need to devote the necessary resources and attention to addressing every aspect of the world drug problem, including the provision of evidence-based care to all who need it, and we need to improve the knowledge base on how illicit drugs relate to other urgent challenges, such as conflicts and environmental degradation.”

The report further emphasizes the importance of galvanizing the international community, governments, civil society and all stakeholders to take urgent action to protect people, including by strengthening drug use prevention and treatment and by tackling illicit drug supply.

Cocaine manufacture was at a record high in 2020, growing 11 per cent from 2019 to 1,982 tons. Cocaine seizures also increased, despite the Covid-19 pandemic, to a record 1,424 tons in 2020. Nearly 90 per cent of cocaine seized globally in 2021 was trafficked in containers and/or by sea. Seizure data suggest that cocaine trafficking is expanding to other regions outside the main markets of North America and Europe, with increased levels of trafficking to Africa and Asia.

Opium production worldwide grew seven per cent between 2020 and 2021 to 7,930  tons – predominantly due  to an increase in production in Afghanistan. However, the global area under opium poppy cultivation fell by 16 per cent to 246,800 ha in the same period.

In the two largest markets for methamphetamine, seizures have been increasing – they rose by seven per cent in North America from the previous year, while in South-East Asia they increased by 30 per cent from the previous year, record highs in both regions. A record high was also reported for methamphetamine seizures reported from South-West Asia, increasing by 50 per cent in 2020 from 2019.

Great inequality remains in the availability of pharmaceutical opioids for medical consumption. In 2020, there were 7,500 more doses per 1 million inhabitants of controlled pain medication in North America than in West and Central Africa.

This year’s report also highlights that illicit drug economies can flourish in situations of conflict and where the rule of law is weak, and in turn can prolong or fuel conflict.

Information from the Middle East and South-East Asia suggest that conflict situations can act as a magnet for the manufacture of synthetic drugs, which can be produced anywhere. This effect may be greater when the conflict area is close to large consumer markets.

Historically, parties to conflict have used drugs to finance conflict and generate income. The 2022 World Drug Report also reveals that conflicts may also disrupt and shift drug trafficking routes, as has happened in the Balkans and more recently in Ukraine.

The environmental impacts of drug markets

Illicit drug markets, according to the 2022 World Drug Report, can have local, community or individual-level impacts on the environment. Key findings include that the carbon footprint of indoor cannabis is between 16 and 100 times more than outdoor cannabis on average and that the footprint of 1 kilogram of cocaine is 30 times greater than that of cocoa beans.

Other environmental impacts include substantial deforestation associated with illicit coca cultivation, waste generated during synthetic drug manufacture that can be 5-30 times the volume of the end product, and the dumping of waste which can affecting soil, water and air directly, as well as organisms, animals and the food chain indirectly.

Ongoing gender treatment gap and disparities in drug use and treatment

Women remain in the minority of drug users globally yet tend to increase their rate of drug consumption and progress to drug use disorders more rapidly than men do. Women now represent an estimated 45-49 per cent of users of amphetamines and non-medical users of pharmaceutical stimulants, pharmaceutical opioids, sedatives, and tranquilizers.

The treatment gap remains large for women globally. Although women represent almost one in two amphetamines users, they constitute only one in five people in treatment for amphetamine use disorders.

The World Drug Report 2022 also spotlights the wide range of roles fulfilled by women in the global cocaine economy, including cultivating coca, transporting small quantities of drugs, selling to consumers, and smuggling into prisons.

The 2022 World Drug Report provides a global overview of the supply and demand of opiates, cocaine, cannabis, amphetamine-type stimulants and new psychoactive substances (NPS), as well as their impact on health.