31st CCPCJ – Turning the Kyoto Declaration into action on the ground 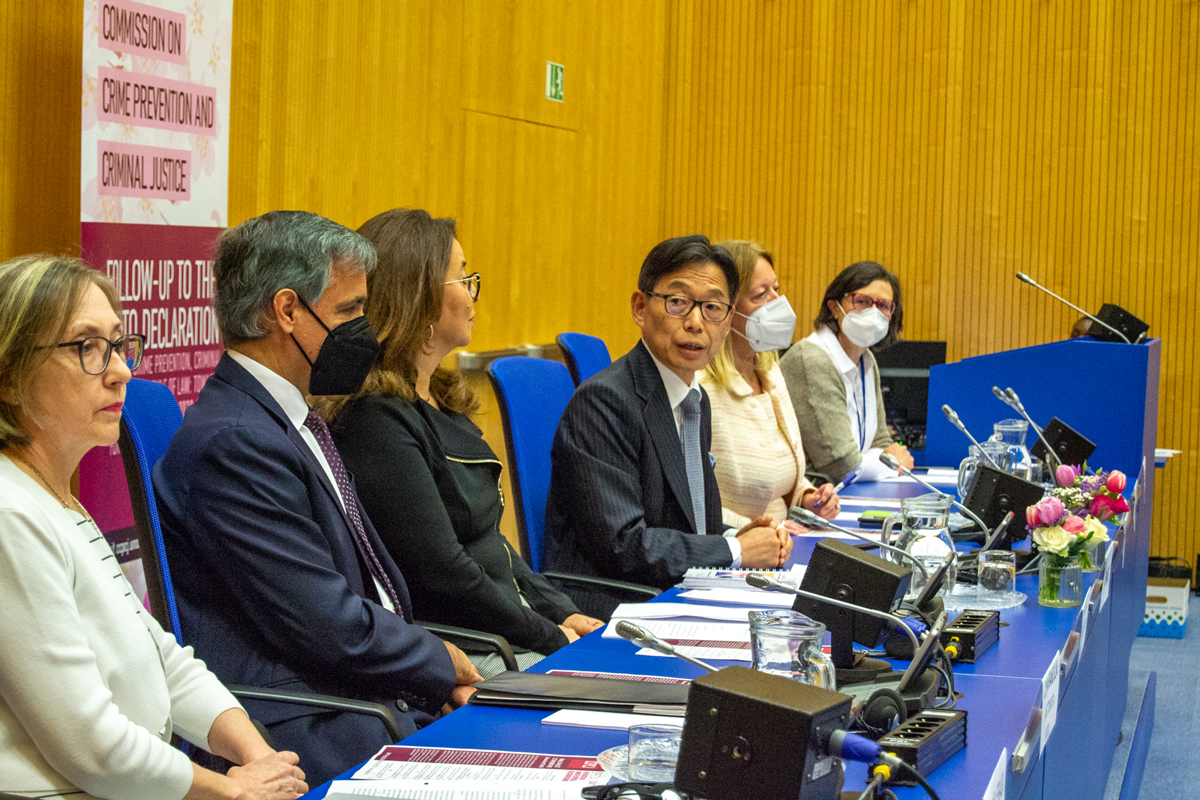 Vienna (Austria), 18 May 2022 – Last Monday, on the opening day of the thirty-first session of the Commission of Crime Prevention and Criminal Justice (CCPCJ), a special event was held taking stock and reporting on initiatives launched since the adoption of the Kyoto Declaration.

The Kyoto Declaration came out of the Fourteenth United Nations (UN) Congress on Crime Prevention and Criminal Justice and was adopted by consensus in Kyoto on 7 March 2021. Member States recommitted to a multilateral approach in preventing and combating crimes and promoting the rule of law and reaffirmed that the United Nations Office on Drugs and Crime (UNODC) is the leading UN entity supporting them in this approach.

Japan’s Ambassador and Permanent Representative to the UN in Vienna, Takeshi Hikihara, chaired and moderated the special event, during which initiatives were reported on including those funded by Japan and implemented by UNODC.

Ambassador Hikihara is also chairing the CCPCJ at its thirty-first session. In his opening remarks, he underlined that “scaling up the implementation of crime prevention and criminal justice policy commitments is one of the key priorities of our commission”.

In her intervention, Ms. Ghada Waly, Executive Director of UNODC, recalled that the “crime congresses have long played an essential role in developing and agreeing holistic justice solutions to strengthen the rule of law and help build a resilient, inclusive society that leaves no one behind”.

Another speaker, Ambassador Xavier Sticker of France, stressed the importance of furthering initiatives to combat crimes that affect the environment at all levels, by using the tools provided by the Kyoto Declaration and exchanging good practices among experts.

The special event also featured interventions by Japan’s State Minister and Assistant Vice-Minister of Justice, the UN Asia and Far East Institute, and the Alliance of NGOs on Crime Prevention and Criminal Justice, as well as UNODC. Additionally, it included a panel discussion with national experts that participated in the negotiations of the Kyoto Declaration.

The CCPCJ is the UN’s principal policymaking body in the field of crime prevention and criminal justice and works to improve international action to combat national and transnational crime and make criminal justice administration systems fairer and more efficient.

The Kyoto Declaration called upon the CCPCJ to adopt policy and operational measures appropriate to following up on the declaration, to identify innovative uses of any information that details progress made in its implementation, and to engage with other relevant stakeholders and strengthen global partnerships that will advance crime prevention, criminal justice and the rule of law.

31st Session of the CCPCJ

Kyoto Declaration on Advancing Crime Prevention, Criminal Justice and the Rule of Law: Towards the Achievement of the 2030 Agenda for Sustainable Development