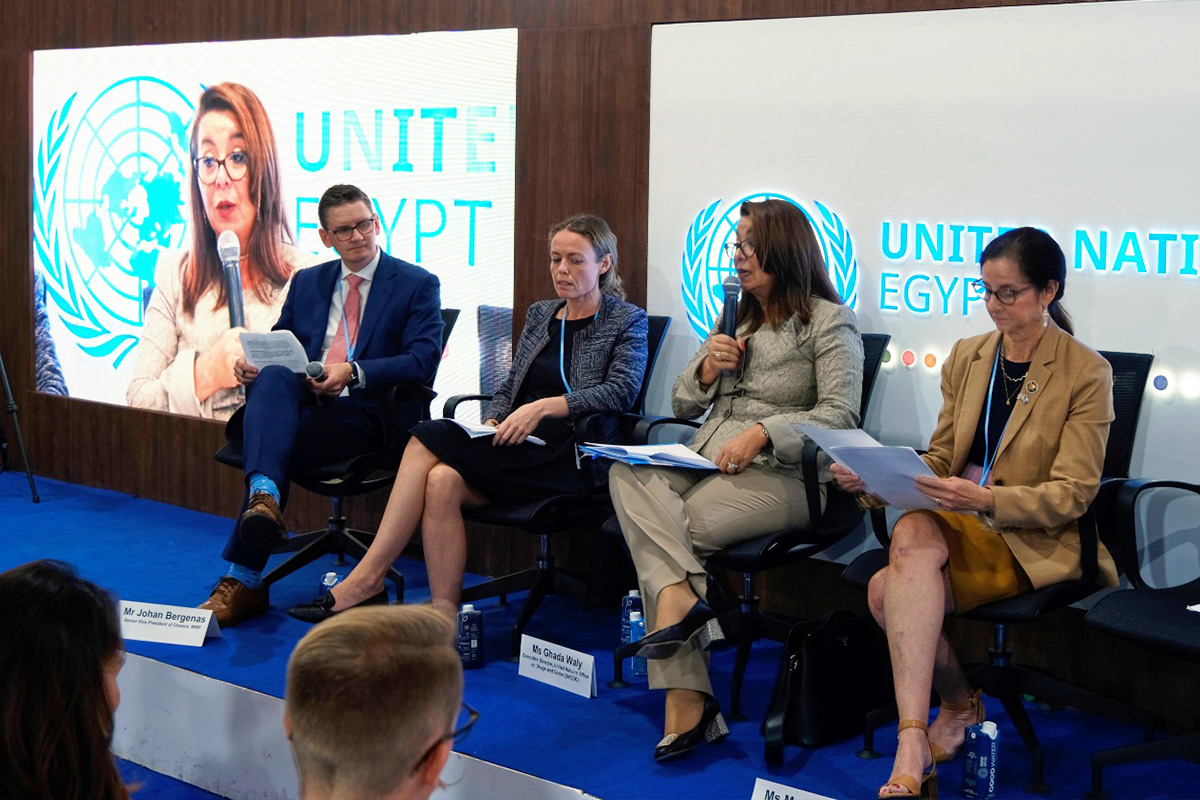 Sharm El-Sheikh (Egypt), 11 November 2022 – For the past week, the United Nations Office on Drugs and Crime (UNODC) has been attending the 27th Conference of the Parties of the United Nations Framework Convention on Climate Change (UNFCCC) (COP27) in Sharm El-Sheikh. The conference is the world’s largest annual gathering on climate action, in which solutions are sought to improve solidarity between countries in meeting the commitments laid out in the Paris Agreement.

At the two side events on the biodiversity-climate nexus that UNODC co-organized with other partners at COP27, ecosystem-based climate mitigation was addressed, along with the need to address crimes affecting the environment as part of strengthening the resilience of ecosystems so that they can withstand climate change.

On Wednesday 9 November, UNODC and fellow panellists discussed solutions and consolidated approaches to addressing deforestation, and the role of a strong justice system in curbing the deforestation and corruption driving the loss of natural resources. The discussions took place through a side event entitled ‘Roles of the Congo Basin rainforest, protected areas, biosphere reserves and world heritage sites in climate change resilience and SDG implementation in Central Africa’.

This session underscored the global importance of Central Africa’s vast and rich natural resources in the fight against climate change, including the Congo Basin, the world’s only remaining net carbon sink, which is increasingly under threat from deforestation, wildlife and timber trafficking, and other pressures.

UNODC Executive Director Ghada Waly spoke about the Office’s work to address deforestation, illegal logging, wildlife and timber trafficking. She emphasized how the environmental degradation-climate change-crime nexus is a self-sustaining cycle. By deteriorating livelihoods, climate change creates a fertile ground for armed and organized crime groups to extend their influence and territory. As a result of their illegal business activities, trafficking in natural resources accelerates deforestation and further exacerbates climate-related insecurity.

The event UNODC organized today in partnership with the World Wildlife Fund (WWF), ‘Ecosystem-based climate mitigation to protect people and planet - raising the ambition for nature’, discussed the way forward for increasing ecosystems’ resilience to climate change. This event sought to raise the ambition to curb deforestation and biodiversity loss made at COP26 – the previous UN climate change conference held in Glasgow, UK – in order to advocate for reinforcing the biodiversity-climate nexus at COP27.

Ecosystems can provide up to one third of emissions reductions needed to keep warming below 2°C. This event highlighted key approaches to increasing ecosystems’ resilience. These included: safeguarding and enhancing Earth’s carbon sinks while protecting human rights; expanding and promoting the role of youth in preventing corruption linked to biodiversity and climate change; and collaboration across environmental and climate authorities, and with maritime actors and the justice system.

At this event UNODC and WWF launched the discussion paper Crimes that Affect the Environment and Climate Change, which includes eight priority recommendations for mitigating or reversing negative trends in biodiversity loss. Addressing the event, Johan Bergenas, WWF’s senior vice-president of oceans, said: “New and innovative partnerships are critical to taking on climate change and its connections to crimes that affect the environment. WWF is proud to partner with UNODC to build capacity.”

Ms. Waly added that “to protect our planet and its inhabitants and support nature’s ability to mitigate climate change, commitments are important, but not enough. We must scale up action to combat crimes that affect the environment. Now more than ever before, we need to transform our relationship with nature and protect ecosystems from criminal exploitation.” UNODC’s research paper on Illegal Wildlife Trade and Climate Change was also presented at the launch.

Both events were opportunities for UNODC to share key messages for the COP27 biodiversity day, to take place next Wednesday, November 16. All thematic days for COP27 can be found in the official programme.

For more information on COP27, please click here for the UN Climate Change website or here for the site of the Egypt COP27 Presidency.

The session ‘Roles of the Congo Basin rainforest, protected areas...’ was organized through a partnership between the UN Educational, Scientific and Cultural Organization (UNESCO), the UN Regional Office for Central Africa (UNOCA), the Secretariat of the Economic Community of Central African States, UNODC and the African Development Bank.

UNODC’s website on CAE and climate change gives more details about the organization’s efforts to address the triple crisis of biodiversity loss, climate change and pollution.