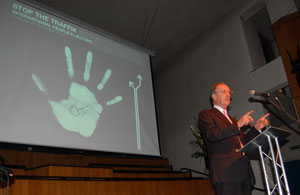 2 December 2008 - Today is the International Day for the Abolition of Slavery, commemorating the abolition of the slave trade by Britain some 200 years ago. At an International People's Lecture organized last week by the NGO Stop The Traffik, lawyer Cherie Booth QC,  said freedom from slavery could claim to be the very first human right recognized by international law.  But she acknowledged the limits of the law in stopping trafficking, a form of modern day slavery.

Antonio Maria Costa, Executive Director of UNODC, called for a change in mindsets: "Human trafficking starts in the head - by viewing women as objects. Whether its burkas or bikinis, the portrayal and treatment of women as either property or sex objects is an affront to human dignity and creates both the supply and demand of women and girls who are traded like commodities".

"Trafficking, like poverty, discrimination and abuse of human rights, wears a woman's face", said Ms Blair. "We need to improve access to education to increase (women's) opportunities and limit their vulnerability to the false promises of the traffickers".

Bringing women into decision-making is specifically recognized by the Global Initiative to Fight Human Trafficking (UN.GIFT) spearheaded by UNODC.

Inhumane labour practices pervade many industries.  Stop The Traffik has highlighted that thousands of trafficked children probably work in the cocoa plantations of Côte d'Ivoire, the source of nearly half the world's chocolate.   Since 2001, this global grass-roots movement has been pressing chocolate companies for "traffik-free" guarantees.  The world is still waiting.

UN Secretary-General Ban Ki-Moon has issued a statement expressing :" In just days the world will celebrate the 60th anniversary of the Universal Declaration of Human Rights. Together, we must ensure that one of its most fundamental tenets - that 'no one shall be held in slavery or servitude' - will soon ring true."