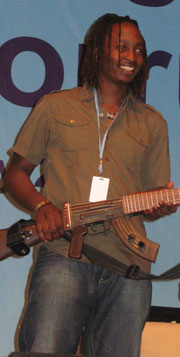 31 January - Kenyan musician Eric Wainaina uses music to satirize the injustices he sees in his native country. He speaks of the frustration of his compatriots who have to pay for their basic rights. A passionate advocate of social justice, he wants to empower people with a simple message. He tells the poor that they have power in numbers over the bent officials, that they don't have to sell their lives away to injustice.

One of his songs Nchi Ya Kitu Kidogo -a country of small things - is a euphemism for taking bribes. It has become almost a national anthem in Kenya. In a country where the poor vastly outnumber the rich, his song satirizes the "small things" that they must daily procure just to survive - money for medicine, education or housing.

While he rails against entrenched petty corruption he shows compassion for the both giver and receiver of enticements. He says that policemen are known to put sticks of marijuana in peoples' pockets just to extract money. But ultimately, the policeman is only trying to get by; he should be paid more to do his job instead of even diminishing his own self-esteem by stooping so low.

The message is taking time to get through. Although the government tries to enforce a zero-tolerance policy against corruption, he has faced demands for a bit of cash on the side. Still, Eric fervently believes corruption is not a way of life.

At a special event at the Second Conference of States Parties to the UN Convention against Corruption in Bali, in which artists said 'no' to corruption, Colombian musician César López presented an escopetarra to Eric in a gesture of solidarity. The escopetarra, which César invented, is an AK-47 that has been converted into an electric guitar. Eric said the escopetarra was like a message from the people of Colombia to the people of Kenya.