"Corruption fights back but you cannot give up" 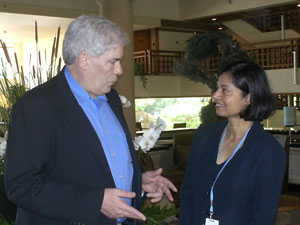 7 February 2008 - CNN anchorman Jim Clancy proves that ratings are not everything. He talks passionately about the people whose lives he has seen blighted by the effects of corruption. Although the big-time fraudsters may hog the headlines with multi-million dollar mansions and bank accounts abroad, it is pervasive, petty corruption that accounts for the estimated 1 trillion dollar price-tag.

All over the world, says Clancy in an interview given last week during the Conference of States Parties to the UN Convention against Corruption in Bali, people complain that jobs and essential services are held hostage by corruption in the public sector. In Baghdad, a street vendor declared corruption the "second form of terrorism."

I ask why someone from a wealthy country would care about this. "The concern is there," he said, "but not the knowledge; the media can explain that corruption is doing harm - but we can do something about it." People in developed countries increasingly feel a moral responsibility to help people get back the money owed them by their governments for essential services such as health care and education.

Clancy wants to broaden that awareness. In Bali he gave hands-on training to a group of journalists from the world's poorest countries. At a special media forum, they talked about efforts to stifle reporting, or even the detention or beatings of reporters. "These young journalists need tools to put pressure on their governments. As a journalist from a developed country, I can help give them those tools."

During the forum, one young woman from Africa talked of her discouragement despite an unshakable resolve to go after corruption. She was frustrated that all her efforts seemed unable to dislodge the entrenched corruption in her country. What could Clancy tell her?

"Don't ever give up," he said. "When you fight against corruption, corruption fights back."

He pointed to the example of Aung San Suu Kyi, who has endured years of house arrest in her fight for democracy. "When you look at Aung San Suu Kyi and consider what she has been through, when you look at other individuals who are standing up to corruption every single day, journalists paying the price and going to jail, you can't get discouraged," he said. "They want you to back off. "

In Jim Clancy's view, journalists need to support one another and reach out to business, civil society, honest lawmakers and, most of all, the public as they battle corruption.

He notes that this type of forum sponsored by the UNODC helps renew journalists' dedication to the fight. They realize that corruption is the biggest enemy they have; it is linked to so many other problems that challenge their nations.

"I think that, overall, what impressed me most was how the journalists watched and listened to the experiences of others and saw what they had in common. They realized that they all get discouraged at times," he said of the forum. "What's more, they came away from the workshop with the realization that together, they were much stronger than any single one of them."

From that, a new alliance was formed. Before leaving Bali, more than a dozen of the journalists from the world's least developed countries created a group that will clearly become a forum not only for these journalists, but others who want to stand up against corruption, reveal its effect on society and explore ways corruption can be unmasked, confronted, and ultimately, uprooted.

The group plans to communicate regularly, share editorial and technical knowledge and lend support to their colleagues. Clancy intends to keep in touch with them and encourage their efforts.

"They are going to go ahead, they have more support than they ever had, and they can use that to find success."