Counter-narcotics operation on the border between Iran, Pakistan and Afghanistan 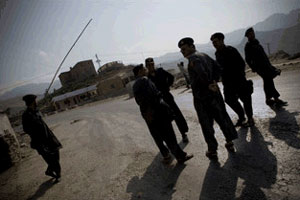 16 March 2009 - Counter-narcotics and police forces of Iran, Pakistan and Afghanistan carried out the first-ever joint operation against drug trafficking networks on 8 March 2009, in the framework of an initiative brokered by the United Nations Office on Drugs and Crime.

Enhancing border management cooperation in drug control amongst these countries is the objective of an action plan developed by UNODC in 2007 and better known as the Triangular Initiative. The goals of this initiative are to be achieved through a step-by-step approach that includes both confidence-building measures, information and intelligence exchange and operational activities.

This historical operation was conducted along the joint borders between Iran and Pakistan, as well as along the Iranian borders with Afghanistan. During this operation narcotics were seized and drug traffickers were arrested.

The results of this unprecedented operation are being assessed on the margins of the Commission on Narcotic Drugs in Vienna. Lessons learned will be taken into consideration in planning and executing future joint operations.

Consultations held in Vienna in February this year between UNODC senior officials and the Permanent Representatives from Afghanistan, Iran and Pakistan to the United Nations provided impetus for the establishment of an intelligence exchange cell in Tehran and eventually the launch of this first operation.

A Joint Planning Cell was established in Tehran at the end of February this year. The three countries have nominated focal points for planning regional operations against trafficking of drugs and chemical precursors, guided by collection and analysis of criminal intelligence. The Joint Planning Cell was instrumental to the launch of this historical operation. It will continue to work in a pilot phase until permanent focal points from the three countries are appointed.

More information about the Rainbow Strategy.