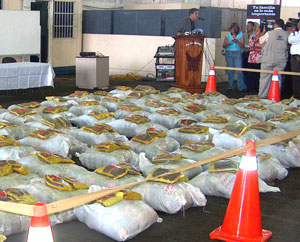 5 December - The joint UNODC-World Customs Organization container control programme has seen numerous successes in its short history. Recently, almost two tons of cocaine was seized in the port of Guayaquil, Ecuador - the biggest in a series of seizures this year.

The final destination for the cocaine in the recent seizure was most likely Europe. The drugs were discovered in a shipment of ground chili peppers following pre-inspection profiling by the inter-agency port control team. A special police investigation unit was able to make a number of subsequent arrests.

Furthermore, 18 tons of isopropyl alcohol was seized by the inter-agency unit in Guayaquil in October. Isopropyl alcohol is controlled under the law in Ecuador because it can be used in the illicit production of cocaine.

The Container Control Programme aims to assist the Governments of Ecuador, Senegal, Ghana and Pakistan to establish effective container controls that will serve to prevent drug trafficking and other illicit activity whilst facilitating legal trade.

Joint port control units comprising officers from different law enforcement bodies (such as customs and police) have been created at selected ports such as Guayaquil. The programme also promotes close cooperation between the customs, trade and enforcement communities as a means to prevent the abuse of legitimate commercial trade for the purposes of organized crime. It also facilitates cooperation with relevant international agencies involved in regulating and monitoring worldwide container traffic.