Fighting corruption with the private sector 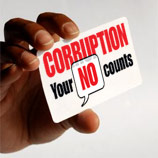 8 August 2008 - Corruption is a complex social, political and economic phenomenon that affects both public and private sectors of all countries. Yet anti-corruption work is often hampered by conflicting needs and low levels of understanding between these two sectors. In fact, public officials and private company representatives tend to blame one another for soliciting or offering bribes.

The United Nations Convention against Corruption - the world's only global legal instrument against corruption - has the potential to safeguard the interests of both private and public sectors. It calls upon governments to become more transparent and accountable. It also creates an opportunity to develop a common global language against corruption and can set universal standards to be used by both sectors to increase integrity.

Recognizing the Convention's potential, as well as the role UNODC can play to tackle this global problem as the Convention's custodian, representatives of large multinational corporations such as Petrobras (petroleum/energy), ABB (power/automation), Coca-Cola (beverages), SAP (software) and BBVA (bank) met with representatives from civil society, labour associations and international organizations in Vienna recently to decide on the road ahead for anti-corruption work.

The meeting was held within the framework of the UN Global Compact, the world's largest voluntary global corporate responsibility initiative. The 10th principle of the Global Compact urges companies worldwide to work against corruption in all forms and manifestations.

Participants at the Vienna meeting decided to synchronize private and public sector anti-corruption agendas and to find ways to work together towards a goal that would ultimately benefit both.

To understand each other's positions and limitations, participants also called for more public-private partnerships. The corporate community's support to countries' efforts to implement the UN anti-corruption Convention is a recognition that the treaty can work as an "insurance policy" for companies. Furthermore, it is a recognition that strengthening the integrity of countries where companies do business is a powerful way to safeguard their investments.

"Public-private partnership is the best way to reconcile diverging perceptions which may generate conflicts and opportunities for corruption," says UNODC Anti-Corruption Expert Giovanni Gallo, "particularly in the area of public procurement, where the two actors interact the most and where they have now agreed to work more closely together."

More information about the UN Convention against Corruption