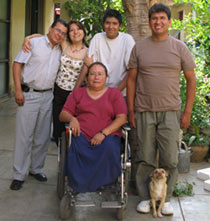 I arrive at the doorstep of Ana María Marañón, a tireless activist for the rights of the boys and girls of Cochabamba, Bolivia. A year has passed since I first met her in Vienna, where she received the Civil Society Award for her lifetime's work in favour of the holistic development of children.

Pepito, as Ana María's assistant is affectionately called, opens the door. Many years ago, Pepito passed through one of the centres that Ana María founded, a centre where vulnerable children and youths are guided to stay away from drugs and crime. Pepito managed to recover from his drug addiction but his health was permanently damaged. Today, Pepito and Ana María support one another.

Ana María looks just as lively as I remember her. She is a woman full of energy and love, whose immense faith has given her the strength to overcome her disability and deal with the needs of the thousands of cases she has come across. For nearly 30 years she has tried to rescue boys, girls and youths exposed to various forms of violence and social discrimination. Thanks to Ana María, these children know they are not alone.

After eating lunch with the family, we set out to drive around the city. Various kids call out "Anita! Anita!" and stop to speak with her briefly. Everyone in the neighbourhood knows her. Some of the kids are under the effects of "clefa", a drug that makes them forget hunger, pain and tiredness. I am told that street children regularly show up at Ana María's door, asking for a glass of water or a piece of bread. Their requests are always met.

At the end of the day, I ask her what has happened during the past year. "We continue our fight, with our faith," is her message of hope to those who are suffering and who seek a better life.

The Civil Society Award is presented by UNODC, the Government of Austria and the City of Vienna to individuals and institutions who have contributed significantly to the fight against drugs and crime.