New Brazilian PSA: Human trafficking is closer than you think 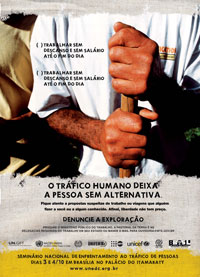 9 January - UNODC Regional Office for Brazil and South Cone has just launched a new public service announcement (PSA) on human trafficking to raise awareness about a problem that many people find is not part of their daily reality. Trafficking in persons has many facets other than the most notorious one in the country: international trafficking of women.

Men and women are trafficked for forced labour in the field, in industries, for sexual exploitation and other forms of crimes. These are the themes of the new 30-second PSA, produced through a pro bono partnership with Brasilia-based ad agency Mr. Brain.

This latest campaign material - part of the United Nations Global Initiative to Fight Human Trafficking (UN.GIFT) - aims to illustrate the issue in a more domestic perspective, showing that this crime is close to everyone's lives. "Very cheap products may be a result of labour exploitation. People are trafficked to work in the textile industries, others work in inhumane conditions in coal and sugar cane production. As consumers and citizens, we cannot close our eyes to immoral aspects of commerce and to severe violations of human rights", says UNODC expert Marina Oliveira. (Story continues below).

Some journalists have expressed difficulties in depicting this crime because many people believe that trafficking in persons does not affect them directly. "The middle/high-class reader will think that his daughter is unlikely to become a victim of trafficking to Europe or the US. If this crime does not affect him personally, or at least financially, it will be difficult to find space for such stories in the main papers and magazines", said one of the country's leading magazine reporters.

The new public service announcement will be shown in the main Brazilian broadcasting companies and is part of a broader campaign also produced by Mr. Brain. The posters depict the main groups of victims: men trafficked for forced labour, and women and children trafficked for various forms of exploitation, including sexual. The posters and banners have also been placed in Brazil´s main airports. The website www.traficodepessoas.org.br has more information on the topic and brings details on how to seek help from governmental agencies.