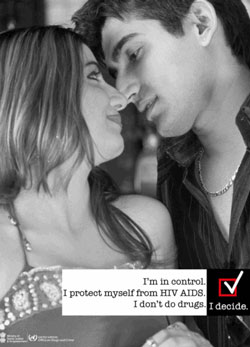 8 May 2008 - UNODC and the Delhi Public School Society are working together to improve the drug awareness education in some 200 Indian schools. By integrating drug awareness into school curricula and extra-curricular activities, the programme seeks to empower youth by promoting one message: "I decide - I will not take drugs."

"The drug abuse awareness programme in our schools is most appropriate as it is aimed at the adolescents who are consumed with curiosity and tend to experiment with the unknown, not realizing the potential threat," said one teacher.

The programme is part of a broader initiative to reduce drug abuse and the spread of drug-related HIV infections in India. A recent survey in the country found that drug-related problems are spreading out from urban areas and affecting rural communities. Injecting drug use is also increasing, as is the number of HIV-positive people.

UNODC worked with the Ministry of Social Justice and Empowerment, the Department of Education and the Ministry of Resource Development to include substance abuse-related content into text books and school modules. This has helped teachers start an important dialogue on drug abuse prevention with students; something not covered by the existing education syllabus.

"The programme was a great learning experience for me", explained one teacher. "I was a little hesitant to discuss this topic with students due to lack of material. Now I feel that I have empowered the children to some extent." 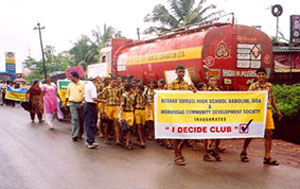 As part of the programme, students take part in interactive exercises to build knowledge and clarify important myths about drug abuse prevention. One of the key areas is the link between drug abuse and HIV/AIDS.

"I learned that drugs don't hurt only me," says one middle school student. "When people take drugs, they hurt their friends, family and people around them. If my friends take drugs, I will try to get them the help they need. I would tell an adult."

As a result of the programme, teachers have reported a visible change in attitudes towards drug use. Problems and issues are discussed more freely. In some schools, students have started 'I Decide' clubs.

Many students also admitted that they have become more wary of experimenting with drugs. "Earlier I had just heard the names of some drugs but only (after the programme) did I realize the long-term effects on the body. I was horrified!" says one student. "Previously, I thought it was alright (to) take drugs a couple of times and then leave them. But now I understand; getting in is easy but getting out is very, very difficult."

More information on this programme (from the UNODC Regional Office in South Asia website).