17 December - International Anti-Corruption Day is commemorated on 9 December. UNODC field and project offices worldwide organize and participate in a range of events - some of which are described briefly below - to raise public awareness about and understanding of corruption.

A celebration was held in partnership with the Ministry of State for Administrative Development to commemorate the Egyptian signature of the UN Convention Against Corruption as well as to mark the International Anti-Corruption Day. The event brought together 40 stakeholders representing the ministries of Justice, Interior, Administrative Development, Investment and Finance, members of the judiciary, representatives of NGOs, the media and key figures from the private sector and academia. 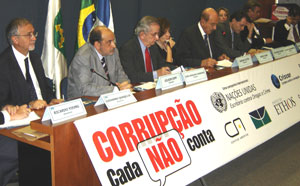 Prominent members of the Brazilian Legislative, Judicial, Executive branches, as well civil society representatives, also from the media and faith-based organizations, came together on December 12 th to discuss how to prevent and counter corruptive practices in Brazil. The public round-table to mark the International Day against Corruption was promoted by the United Nations Office on Drugs and Crime (UNODC) in Brazil, in partnership with the University of Brasília (full story in English - Portuguese).

UNODC in Pakistan collaborated extensively with the media. In the morning of 9 December, the UNODC Representative participated in a live television discussion programme on national TV. Throughout the day, anti-corruption television spots were shown on several television networks, and in the evening, UNODC was represented at a discussion programme. The most popular radio station, FM 100, also focused on corruption through a "countdown" in the week before the Anti-Corruption Day and a two-hour talk show. 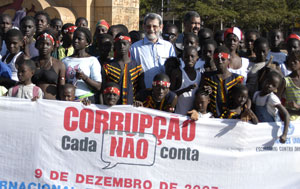 The commemorations took place in Bissau, the capital city of Guinea-Bissau. The UNODC Regional Office for West and Central Africa produced a 45-second TV spot as well as a 15-second radio jingle. Both were broadcast throughout Bissau and Cape Verde. Furthermore, a music and dance carnival through major roads and populous areas of Bissau mobilized people to participate in  the official celebration event. UNODC also organized a cartoon competition for primary schools in Bissau and a conference on the StAR asset recovery initiative at the Central University of Bissau.

In Bolivia, law students were invited to submit monographs on the the Bolivian penal law and its adequacy against crimes of corruption as mentioned in the third chapter of the UN Convention against Corruption. The winner was recognized at the main event to mark the International Anti-Corruption Day in La Paz. Moreover, a series of 10 radio programmes, covering different corruption-related themes, started airing on Bolivian radio stations.

A large symposium, attended by some 150 Government representatives, academics, media, UN agencies, members of the diplomatic corps/embassies, international organizations, NGOs, the National Counter Corruption Commission and partner universities, was arranged in Bangkok. The symposium featured presentations from different sectors of society focusing on what a particular sector can do to stop corruption. Furthermore, telecommunication companies distributed anti-corruption SMS messages to their subscribers.