"Not So Silent Partners"

NGO contributions to the 1998 UNGASS targets 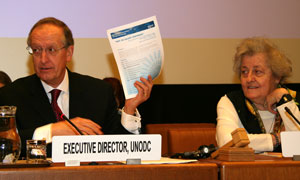 13 March 2008 - "I value the fact that you have spoken out on important issues. We don't need silent partners; we need dynamic, outspoken ones!" said UNODC Executive Director Antonio Maria Costa at the opening of the NGO Forum "Not So Silent Partners", a side event to the fifty-first session of the Commission on Narcotic Drugs (CND). This remark set the tone for a lively, informative and constructive dialogue about "Beyond 2008", a project undertaken by the Vienna NGO Committee (VNGOC) in partnership with UNODC.

"Beyond 2008" has brought together more than 500 NGOs from across the world to contribute to the UNGASS ( UN General Assembly Special Session on Drugs, held in 1998) review process. The findings from the consultations were combined with responses to an on-line questionnaire from more than 450 NGOs, representing some 14 million members. The outcome was a conference room paper which has been circulated at the CND session.

At this event, the regional lead organizations from each regional consultation were given an opportunity to present the key findings within their region. A fundamental component throughout the regional consultation process has been that, notwithstanding an enormous diversity of experience and opinion, NGOs participating in "Beyond 2008" have found far more areas of commonality than diversity. In fact, NGOs are moving beyond the old drug control dichotomies such as "win/lose", "supply and demand reduction/harm reduction", and "status quo/revolution", through a sustained focus on the shared goal of combating the global drug problem.

Once again emphasizing that "drug control is too important to be left to Governments alone", the UNODC Executive Director praised the work of all contributors to the "Beyond 2008" process. In particular, he gave a heartfelt ovation to the Chair of the NGO Forum, Ms. Eva Tongue (pictured with Mr. Costa), who was attending her last CND session as Chair of the VNGOC.

"Beyond 2008"  will culminate in a global NGO summit in Vienna from 7 to 9 July where some 300 representatives of NGOs worldwide will debate and adopt recommendations to be tabled at the 2009 High-Level Segment of the CND. This High-Level Segment will decide on future United Nations drug policy.