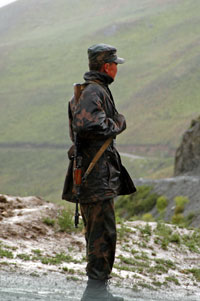 15 August 2008 - One of the great pleasures of working in the field is that it sometimes offers the opportunity to get out of the office to explore the region covered by the field office, which in my case is Central Asia. One mission in particular told me more about the difficult conditions of those working on the frontline against drug trafficking than any number of reports or photographs could have done.

My office's portfolio includes activities to counter trafficking in persons, money-laundering and corruption. However, drug trafficking and its negative effects of skyrocketing drug abuse and associated HIV among injecting drug users occupy most of the time and resources of the Regional Office in Central Asia.

Therefore, I went on mission to the border areas of Tajikistan to visit border guard units and Drug Control Agency (DCA) sub-offices. Tajikistan, with its long border with Afghanistan and exceptionally rugged mountain terrain, has long been the front line in trying to stem the flow of opiates from Afghanistan. This flow has been on a steep upward trajectory since 2001.

The Tajik DCA, established in 1999 with assistance from UNODC, has been the leading agency in that country's fight against drug trafficking and also works closely with the border guard and customs services. The former Ambassador of Italy, Angelo Persiani, and I were accompanied on the mission by General Rustam Nazarov, head of the DCA, and some of his staff.

Given the ruggedness of the Pamir mountain range, we had planned the trip for mid-summer, when roads and passes were most likely to be open. Needless to say, a journey through the Pamir and along the border with Afghanistan, China and Kyrgyzstan promised to be an adventure. We left Dushanbe and made good progress heading northeast toward the border with Kyrgyzstan. When we reached the border the next day, we were greeted by rain, and thus got a first-hand view of the difficult living conditions of the border guards.

Our plan for day two was to travel through Sary-Tash, Kyrgyzstan, and then to head south back into Tajikistan and onward to Murgabh, the highest point of our journey and the site of the border guard centre for the region and of the customs facility that handled goods coming in from China and Kyrgyzstan.

We reached the border post by mid-afternoon. After lengthy dealings with the Kyrygz customs officials, we started the climb towards Murgabh. We had driven less than an hour when we were confronted by a massive mudslide caused by a freak summer rainstorm that had made the road impassable. One driver before us had attempted to drive through but had ended up sinking his truck in mud to its doors. All efforts to find a solution that afternoon failed and we drove back into Kyrgyzstan to seek accommodation in Sary-Tash's only "hotel". We had hopes that the mudslide could be cleared the next morning. But when we woke up, the ground and vehicles were covered in snow. This dashed all hope of getting to Murgabh.

After consulting General Nazarov, we decided to backtrack and head south towards Khorog on the border with Afghanistan. The storm, however, had rendered some of the roads - actually dirt tracks - almost impassable and our progress was slow. Along that route we encountered washed out bridges and flooded fords. I have forgotten how many hours it took to reach Khorog, but it was the longest day spent in a vehicle I can recall. As the weather cleared, the mission became less challenging but still fascinating as we visited Khorog, Kuliab and many border guard outposts along a circuitous route back towards Dushanbe.

More on UNODC's work in Tajikistan: 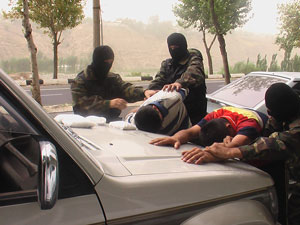 With support from UNODC, the Ministry of Interior of Tajikistan (drug police) established a Mobile Interdiction Team (MOBIT) in late 2007. Set up to strengthen responses to drug trafficking and to uncover drug channels and routes from Afghanistan through Tajikistan, the team has already seized 220 kilograms of narcotics. This included more than 100 kg of raw opium and 7.6 kg of heroin. Fifteen drug traffickers have been detained by the team.

This MOBIT complements those established by UNODC in Kyrgyzstan and within the Drug Control Agency of Tajikistan. UNODC works jointly with bilateral donors to support MOBITs under its regional strategy.

"The importance of MOBITs is that they move drug interdiction beyond the static, fixed border checkpoints and use intelligence and profiles to direct the teams to potential traffickers and trafficking routes along the borders," according to UNODC Regional Representative for Central Asia, James Callahan.

UNODC has provided these teams with special equipment, vehicles, uniforms and computers, and organized regular training and seminars. "In the future, the team will be essentially strengthening police capacities in combating illicit drug trafficking in border areas," said Captain Jamshed Nazarov, the MOBIT commander.