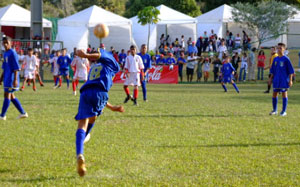 9 July 2008 - The Swiss and Austrian Embassies together with UNODC recently hosted a mini-Euro Cup in Brasilia to promote sports as a means to deter drug abuse. Held on the official opening day of the 2008 Euro Cup football tournament - 7 June - the one-day contest specifically targeted disadvantaged children.

Over 100 boys from public schools in the outskirts of Brasilia, together with their parents, families and teachers joined in the tournament. Eight teams represented Austria, Croatia, Italy, Poland, Portugal, Spain and Switzerland; the contest was eventually won by Italy. Supported by the respective embassies, the teams were handed educational information on the country they represented.

The event was attended by media and marked by the slogan "Use sports. Don't let drugs control your life". UNODC-produced awareness-raising material was distributed including information targeting the children.

Almost one thousand people attended the event including diplomats and government representatives.

Swiss Ambassador, Rudolf Baerfuss, says he wanted to bring the most important European tournament closer to Brazil's children who adore football. "We were so happy to host the official tournament this year that we felt it would be great to share this joy with disadvantaged children in Brasilia."

Public school teacher Sandra Santos praises UNODC´s initiative to prevent drug abuse at early ages. Teaching in public schools in vulnerable communities, Santos has seen children meddle with drugs as early as 7-8 years old. "I have witnessed slightly older children enrol at school only to find new customers. They are actually young drug-traffickers who abandon class once they get their clients fixed," says Santos. "We will definitely use UNODC material in class. It's an outstanding initiative."

The tournament received sponsors from the Federal District Government as well as Nestlé and Coca-Cola, which provided ice-cream, sweets and refreshments throughout the day.