Reaching out to youth to prevent drug abuse

27 February 2008 - "He dreamed of becoming a doctor." "We loved each other, dreamed about getting married and having children." "I was the best sister in the world for him, he promised to take me to Paris."

But he didn't become a doctor, didn't marry, and didn't take his sister to Paris. He died of drug abuse at the age of 18. 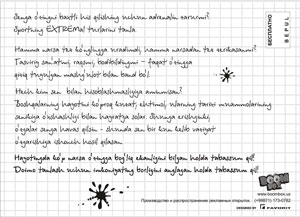 This is an extract from one of the short stories printed on the reverse side of free postcards, called BoomBox cards, in Uzbekistan. These cards aim to demonstrate to young people that drug use is likely to lead to a variety of negative consequences, such as harm to health, loss of close relationships, reduced performance in school and at work, ruined dreams and broken lives.

How can one to reach out to youth with such prevention information? Many young people think that illicit drugs are someone else's problem and therefore don't concern them. With the purpose of encouraging youth to think that the problem could affect anyone including themselves, the UNODC Regional Office in Central Asia, based in Tashkent, Uzbekistan, developed and printed postcards as part of a 6-month media campaign with simple messages and youth-friendly appearance that have been distributed free of charge in city supermarkets, shops, snack bars, hotels and other places.

"For many parents, illicit drug use is not an easy, comfortable topic to raise with children, as it requires open and honest discussion about sexuality, drug use and more. Cards such as these help parents to start talking about the issue with their children," said one of the parents.

"We were very pleased with the positive results of UNODC's recently completed drug demand reduction programme," said Richard Norland, the United States Ambassador to Uzbekistan. "Efforts to reach out to Central Asia's youth are a vital component of our broader counter-narcotics strategy in the region."