14 February 2008 - Music star and activist Ricky Martin told participants at the Vienna Forum to Fight Human Trafficking on Wednesday that music had given him "an excuse to talk to people about this global nightmare."

Ricky Martin has been performing since he was 12 years old and has travelled the world over. It was during a trip to India in 2002 that he opened his eyes to the "unscrupulous" crime of human trafficking. In Calcutta, he witnessed the rescue of three girls and started educating himself about it.

Through his Ricky Martin Foundation, the multiple Grammy Award winner has raised his voice to uphold the rights of children and protect them from exploitation. Together with its partners, the Foundation has developed several initiatives aimed at educating the general public about human trafficking and stopping the trade in children. "My hope is to secure for every child the right to be a child," Ricky Martin said.

At the opening session of the first global forum on human trafficking, Ricky Martin told an audience of 1,200 delegates that "now you really have a problem because you know what is going on and, if you won't do anything, you're allowing it to happen." Every year, millions of men, women and children fall prey to exploitation. UNICEF estimates that 1.2 million children are trafficked worldwide annually.

Ricky Martin called on participants representing Governments, civil society, the private sector, academia and the entertainment industry to take action against a crime that shames us all. "React, it's time," he said. "Human trafficking has no place in our world today." 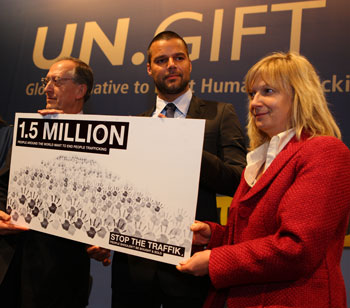 At the Vienna Forum, the campaign Stop the Traffik, a global coalition of over 900 grassroots organizations, presented UNODC Executive Director Antonio Maria Costa and Ricky Martin with a petition signed by 1.5 million people calling for an end to human trafficking. The campaign aims to prevent the sale of people, prosecute the traffickers and protect the victims.