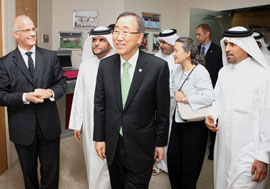 3 December 2008 - UN Secretary-General Ban Ki-moon has pledged his support for the Global Sport Fund initiative. Mr Ban praised the partnership between UNODC and the Qatar Olympic Committee (QOC) in remarks to media representatives after his recent visit to the UNODC office and the QOC.

"I congratulate the government of Qatar for its support and commitment and the United Nations Office on Drugs and Crime for this initiative. I look forward to a long-term relationship on this project to make the world a better place for all of humanity," the Secretary-General said.

The Global Sport Fund (GSF) is a UNODC initiative sponsored by the Qatar Olympic Committee that helps youth live safer and more peaceful lives through sport. It is particularly aimed at the millions of young people who are affected by poverty, natural disasters and armed conflict.

"Today, young people, particularly in developing countries and disadvantaged communities are vulnerable to drugs and delinquency. In some cases, they become child soldiers, victims, or offenders of crime that are largely related to substance abuse," the UN chief said.

"The Qatar Olympic Committee and the United Nations are supporting young people around the world to become involved in amateur sport not just for fun, but to provide children and youth the opportunity to learn social skills that will keep them safe from drugs," Ban Ki-moon added.

The Global Sport Fund awards grants for mini-projects run by NGOs in communities in Africa, Asia, Oceania and the Pacific, Latin America and the Caribbean, and Central Europe that use the GSF programme to coach boys and girls between the ages of 11 and 17 years in fair play as they participate in organized sport.

Additionally, the GSF arranges 1-week camps in the various regions for selected youth leaders, coaches and mentors to go through its own programme directed by core trainers. Successful participants are expected to go back and pass on the learning through peer-to-peer and group training.