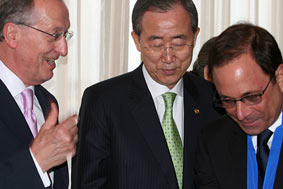 14 May 2009 - Secretary-General Ban Ki-Moon yesterday led international calls for strong laws, broad alliances and concerted action against human trafficking at a special thematic dialogue of the General Assembly.  Trafficking in weapons, drugs and blood diamonds has long been on the UN agenda, he said. "Now we must add people to that list".

Mr. Ban said millions of people, most of them women and children, are bought and sold like "chattel" in a number of countries from Asia, Africa, across the Americas, to Europe.

He underscored the need for collective action to criminalize human trafficking, prevent victimization by teaching people about their rights, reduce demand, end impunity and protect the victims. "We will achieve nothing without uniting and speaking out. We will achieve nothing by offering fine rhetoric not matched by deeds. Moral outrage is all-too-easy. Real action takes real commitment," said Ban.

Antonio Maria Costa, Executive Director of UNODC, expressed disappointment that one-third of United Nations Member States had not yet ratified the UN Protocol against Trafficking in Persons.  He added that many States lacked adequate anti-trafficking legislation and awareness campaigns, especially important now when the number of potential victims could greatly increase with the global economic crisis.

The thematic dialogue "Taking Collective Action to End Human Trafficking" considered ways to establish a global action plan.  In his concluding remarks, President of the General Assembly, Miguel d'Escoto Brockmann, looked forward to more progress in the future.  "I am pleased to hear the appeals at this meeting to support the General Assembly action on a Global Plan of Action to prevent human trafficking, prosecute traffickers, and protect and assist the victims. I will work hard with the 192 Member States of this Assembly to develop a Global Plan of Action." 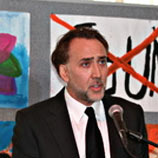 The evening before, Academy-award winning actor Nicholas Cage, Alec Baldwin, fashion designers Calvin Klein and Donna Karan, and a host of other celebrities joined the Secretary-General in honouring New York artist Ross Bleckner, appointed UN Goodwill Ambassador to Combat Human Trafficking.  The event featured an exhibition of some 200 paintings created by former child soldiers and abducted girls from Gulu, northern Uganda, who had benefited from an art therapy project by Bleckner. The first fine artist to become a UN goodwill ambassador, Bleckner curated the exhibition on behalf of UNODC and the International Criminal Court's Trust Fund for Victims.  Proceeds from the sale of the paintings will benefit the children of Gulu.

Paying tribute to the victims, Cage said  "May their luminous work bring a lot more lights, cameras and action to the problem of human trafficking, particularly trafficking of children".

Mr. Ban told guests "You may not have the same painting skills as Mr. Bleckner, but each and every single one of you can make a difference in your own sphere of influence."

Mr. Costa recalled his poignant trip to Gulu: "The kids - mentally and physically scarred from their horrendous experiences - used the colours to express their memories, nightmares, dreams, and hopes. Those kids are the real stars of tonight's show".

However, Mr. Costa acknowledged that much still needed to be done.  "Their pictures tell very personal stories. But they are also small dots on a much bigger canvas. There are tens of thousands of children like them whose stories are never heard. And there are millions of human trafficking victims around the world who need your support."