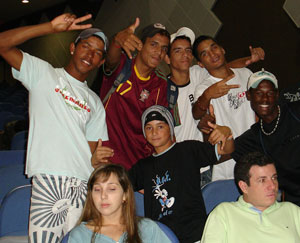 2 April 2008 - More than 2,000 young people, aged 15-29, recently gathered at a youth conference in Brazil's capital, Brasilia. For the first time in this region, youngsters discussed youth-related issues and proposed policies. Drugs and violence were among the participants´ top priorities. UNODC Brazil partnered with the Global Sport Fund to promote drug abuse prevention and to gather ideas for future youth-related regional and national policies.

"It is a unique democratic experience to listen and learn from the youngsters´ demands," said the Federal District's Sub-Secretary for Youth, Luciano Lima. "This is particularly relevant for a country that went through more than 20 years of dictatorship during which youngsters lacked freedom of expression and were denied basic human rights," added Governor Jose Roberto Arruda.

Besides the Federal District of Brasilia, 26 other states are holding local conferences where young delegates are elected to represent the states at the National Youth Conference to be held in late April 2008. According to the National Youth Secretary, Beto Cury, two thirds of the states have already held their events with over 300,000 participants. Brazil has more than 50 million youth aged 15-29.

UNODC helped coordinate a group of 50 youngsters who discussed problems related to violence and drugs. "There is a distinct lack of programmes that use sports and culture as a means to prevent drug abuse and violence," the group said in a statement. "Kids have to keep their minds and bodies busy in order to prevent problems with drugs and crime," they added.

"The family also needs to be factored into social policies for drug abuse and violence prevention." One of the group's suggested proposals was to increase extra-curricular activities that include the family, focusing on drug abuse prevention through sports and culture. 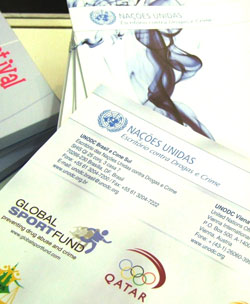 The group s tressed that authorities often perpetrate violence against youngsters from low-income backgrounds. "I lived on the streets and was dependent on crack. At  rehab, the people who should have helped me overcome my problem beat me up. I ran away. Policemen also beat up kids living on the street," said 18-year old Wilson Fonseca, who has overcome his drug dependency and is now an active member of an NGO for youngsters living on the streets. To counter this problem, the group proposed increasing awareness on human rights amongst the youth, and disseminating contacts of state-related agencies and toll-free numbers to denounce crimes. The group stressed the importance of training authorities and encouraging colleagues to report abuses.

Participants also discussed such topics as sexuality, diversity, education, media, environment, democracy and employment. Proposals emerging from the event will be discussed at the National Conference and will support the development of a National Plan for the Youth.

A total of 15 delegates were elected by participants to represent the Federal District. Among them are representatives from special needs groups, youth living on the street, scouts, freemasonry, lesbian gay bisexual and transgender person (LGBT) movements, student unions, and political parties.