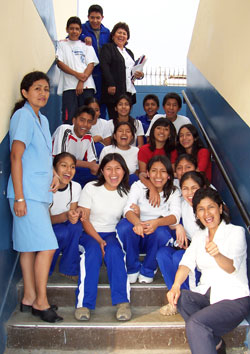 20 February 2008 - Rosanna Yactayo Castro has been teaching for almost 20 years. She works in a secondary school in Lima's port area, Callao. Her district is one of the areas recently identified as a high-risk zone for drug abuse among young people. Yactayo was one of more than 400 teachers across Peru who received training through a UNODC-supported initiative to get students talking about healthy lifestyles and conflict-resolution.

"Students have always felt comfortable approaching me with problems at home or with friends," said Yactayo. "Now, with this training, I feel better equipped to introduce these discussions in the classroom in a proactive way as opposed to waiting for someone to have an issue or crisis."

Yactayo says her students feel stress because of drugs and gangs in the community, family conflict and unemployed parents. She uses role-playing, art, music and group discussions as a way to talk about problems or introduce new ways of dealing with uncomfortable situations. She remains an optimist about the future of her students: "Today's young people are much more aware of what's going on around them. They're also tuned in to new forms of communications, such as the Internet. We need to capitalize on this to reach out to them."

In a classroom upstairs, another teacher, Elizabeth Gamboa Dios, is doing just this. Gamboa also received training in the same UNODC-sponsored teachers' initiative. Her classroom is filled with computers and the students are hooked up to Huascaran Project, a website constructed by Peru's Ministry of Education as an electronic meeting and learning place for students.  Developed with support from UNODC, the website provides teachers with modules for classroom discussion and suggestions to students for interactive games and creative play focusing on healthy lifestyles and drug awareness. Two of Gamboa's students recently took their homework assignment very seriously and wrote a rap song called "Piensa" (Think), warning students of the consequences of experimenting with drugs.