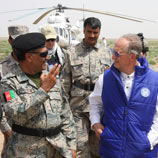 3 June 2009 - Afghanistan, Iran (Islamic Republic of) and Pakistan share a common problem: drug trafficking. Afghanistan is the epicentre of the world opium problem, accounting for 93 per cent of all opium poppy cultivation. Around 80 per cent of the drugs derived from opium poppy (opium, morphine and heroin) are smuggled out through the Islamic Republic of Iran and Pakistan; the rest is smuggled through Central Asia. While some drugs are consumed in these markets, most head west.

No State can solve the problem on its own. It is a truly regional problem, with a global impact.

To improve regional cooperation in addressing this common threat, UNODC has brokered a trilateral initiative. The idea, launched at a ministerial meeting in Vienna in June 2007, is to strengthen counter-narcotics cooperation, build confidence and share intelligence among the three neighbours.

The initiative is gaining momentum. A joint planning cell has been established in Tehran for information and intelligence exchange and to launch joint operations. The first joint operation against drug trafficking networks took place on 8 March 2009 along the joint borders between the Islamic Republic of Iran and Pakistan, as well as along the Iranian border with Afghanistan. 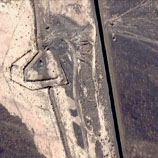 Earlier this month, the Executive Director of UNODC, Antonio Maria Costa, visited the border area between Afghanistan and the  Islamic Republic of Iran (in Herat province) to see what steps had been taken by the Afghan authorities to strengthen border security and counter-narcotics efforts. Two weeks later, Mr. Costa inspected a section of the 1,000 km-long network of embankments, canals, trenches and cement walls along the border in Sistan-Baluchistan. In both countries, Mr. Costa discussed ways of increasing practical cooperation. He will do the same during an upcoming visit to Pakistan.

On 24 May, the presidents of the three countries met in Tehran and agreed, among other things, to enhance trilateral cooperation to fight terrorism and drug production and smuggling.

"This UNODC idea is gaining traction, all sides have a vested interest in its success", said Mr. Costa. The focus now is to make joint counter-narcotics a matter of course. "This is the UN at its best: to inspire the right policy, build confidence and solve common problems", said the head of UNODC.

Politically, the next trilateral ministerial meeting will take place in Islamabad within the next month. It is crucial to build on the first steps in order to strengthen partnership, political will and a sense of common purpose among States that have, in the past, had their differences. Operationally, the next step is to establish border liaison offices on each side of the borders of the three countries and to carry out more joint operations.