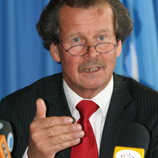 24 April 2009 - Manfred Nowak, United Nations Special Rapporteur on Torture and other Cruel, Inhuman or Degrading Treatment or Punishment, addressed the Commission on Crime Prevention and Criminal Justice today. In an interview, he discussed human rights issues related to drug control policies, prison conditions and the way in which his mandate touched on counter-terrorism operations.

Nowak, who has sent more than 1,000 communications on allegations of ill-treatment to virtually all Governments, said torture and inhuman conditions were widespread. He also noted that, surprisingly, it was not so much "political" torture that was problematic but, rather, the fact that police officers under pressure to resolve cases often routinely tortured common criminals to extract confessions. "I have constantly been surprised at how few countries do have a clear legal provision criminalizing torture in accordance with the explicit obligation and the definition provided by the Convention against Torture and Other Cruel, Inhuman or Degrading Treatment or Punishment," he said.

Corrupt and malfunctioning criminal justice systems are a root cause of torture and ill-treatment of detainees, many of whom spend years in pretrial detention on the basis of forced confessions, often for periods far exceeding their likely sentence, he said. "Torture is absolutely prohibited by international law, and so is using a confession obtained under torture as evidence in proceedings." Mr. Nowak also said that "the burden to prove whether torture or ill-treatment has been used is on the authorities".

Mr. Nowak also spoke about appalling prison conditions worldwide, conditions that fall below the Standard Minimum Rules for the Treatment of Prisoners. "In many countries, persons in police custody do not receive any food. The police simply rely on families to supply food, and sometimes water, and do not take any precautions if detainees have no families". He noted that "in many cases, persons in police custody are frequently not allowed to use toilets and have to rely on their own, often makeshift 'sanitary' facilities, which is irresponsible in terms of hygiene and dehumanizing in terms of dirt and smell".

He found that prisons were overcrowded worldwide and that this led to disturbing consequences: "Prisoners take over the management of their facility, which almost inevitably leads to problems in terms of discrimination and increases the risk of inter-prisoner violence and disciplinary violations".

Nowak is concerned that Governments and criminal justice systems should respect the rights of drugs users: "If you arrest someone who is a drug addict and then you take away every possibility, every access to drugs or substitutes, then the withdrawal symptoms as such might amount to cruel or inhuman treatment, and if this is used (as it is sometimes used) for interrogation purposes, then there are various human rights violations".

"The restrictive, punitive drug policy has led also to the fact that often people in need of pain relief or palliative care have no access" to such care, he said.

Speaking on the "war on terror", Nowak said that States had "undermined the absolute prohibition of torture and ill-treatment, which had led to various human rights violations".

He believed in "providing the victims with adequate reparations in accordance with the United Nations Convention against Torture but also to hold to account those who either directly applied torture, ordered torture and participated by providing legal memos in justice departments."