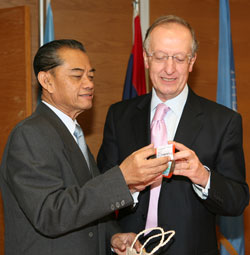 31 March 2008 - UNODC recently committed to extending a joint project with the United Nations Industrial Development Organization (UNIDO) to provide alternative income opportunities for opium poppy growing communities in the Lao People's Democratic Republic. The announcement was made on the margins on the 51st Commission on Narcotic Drugs (CND) held in Vienna earlier this March.

Together with UNIDO Director-General Kandeh Yumkella and Soubanh Srithirath, Lao Minister to the President's Office and Chair of the Lao National Commission for Drug Control and Supervision, UNODC Executive Director Antonio Maria Costa welcomed the initiative, praising its contribution to "the gradual transformation of the socio-economic circumstances of whole communities that used to depend on opium cultivation for a living."

Lao PDR used to be the third largest producer of illicit opium in the world. In the last ten years, opium poppy cultivation and production have been reduced by more than 94 per cent. This is undoubtedly a positive development, yet the isolated communities that once grew opium poppy remain poor and need alternative sustainable livelihood solutions. Without these, they could well revert to cultivating opium for income.

In its first year, the project focused on rehabilitating opium addicts and involving them in income-generating activities; establishing a productivity and marketing center; strengthening and training village productivity groups to contribute to rural economies; and organizing communities to manage their village's social development. Presently, activities focus on enhancing the coverage and operation of the social services and improving or constructing basic infrastructure. The last phase will look to improve market access of products and ensure that income generation activities are sustainable.

The three-year programme that began in March 2007 in the Hoon, La and Xai districts of Oudomxay has already received positive feedback for its impact. The Mini Dublin Group for Lao PDR - consisting of international representatives working on drug-related issues in the country - is impressed with the project's progress and how "appropriate production technology" is providing a sustainable alternative to opium production and improving livelihoods.

The project originally received US$2 million from the Japan-funded UN Trust Fund for Human Security. Partners would now like to extend the project to cover 1,100 villages in 32 of the poorest districts identified for priority assistance by the Lao National Poverty Reduction Programme. An additional $US 40 million is estimated to be needed.