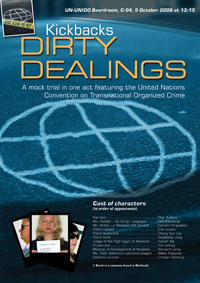 13 October 2008 - Mr. Dirtos, a civil servant in charge of procurement in the Ministry of Development of the fictional State of Newland, is caught red-handed and on videotape accepting a bribe from Ms. Badder, the representative of a multinational company called Enrot. So starts Kickbacks: Dirty Dealings, a one-act performance staged by a cast of  UNODC staff members on the margins of the current session of the Conference of the Parties to the United Nations Convention against Transnational Organized Crime.

Having been arrested, Mr. Dirtos is subjected to two trials for the same crime. Far from being a case of double jeopardy, the purpose of acting out the trial twice was "to show, in a very practical way, how the implementation of certain aspects of the Convention can improve the outcome of a trial and the fight against organized crime," says Olga Zudova, Senior Legal Adviser in the Organized Crime and Criminal Justice Section at UNODC.

In the first scenario, criminal proceedings are carried out on the basis of laws that do not reflect the provisions of the Convention. Specifically, the inadmissibility in court of evidence gathered through special investigative techniques (including electronic surveillance and undercover operations) means that only Mr. Dirtos is convicted. His boss, the Minister, as well as the head of an organized crime organization, is set free. Ms. Fixer, a lawyer and the partner in crime responsible for setting up dummy companies and arranging bribes, also goes unpunished.

In the second scenario - reflecting the implementation of the Convention's provisions - such evidence is considered valid and all three defendants are found guilty; the Minister receiving the harshest sentence of all. The two civil servants are banned from ever serving in public office again and Ms. Fixer is disbarred. The proceeds of the crime (US$ 1.5 million) are confiscated by the State.

"We wanted to bring the Convention alive," says Ms. Zudova, who played the role of   narrator, "and show the importance of extending voluntary mutual legal assistance in cases of transnational crime and of confiscating the proceeds of such crime."

The mock trial was also intended to draw attention to the fact that while many States have ratified the Convention, their failure to implement all of its provisions constitutes a challenge to achieving justice.

The idea of the mock trial drew on a similar trial organized by UNODC at the Vienna Forum of the UN Global Initiative to Fight Human Trafficking (UN.GIFT), in February 2008. UNODC is now considering  replicating the mock trial in Austrian police academies, at the Diplomatic Academy of Vienna and at the Anti-Corruption Academy soon to be launched with INTERPOL .