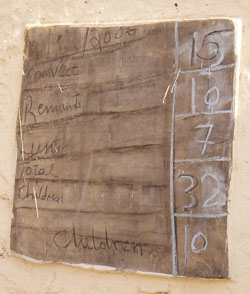 25 March 2008 - UNODC recently started assisting the Government of Southern Sudan with its prison reform process. Undertaken in cooperation with the International Centre for Criminal Law Reform and Criminal Justice Policy and the United Nations Mission in Sudan (UNMIS), this is the first UNODC project in Sudan.

The project follows a specific need identified by the Government of Southern Sudan to help build and strengthen the capacity of prison management to lead the prison reform process. "This includes enhancing the capacity of the Southern Sudan Prison Service to respond more effectively to the needs and circumstances of children, women and other groups with special needs in prison," says Mark Shaw, UNODC Inter-Regional Adviser, who leads UNODC's work in Sudan.

At the invitation of the Government of Southern Sudan and UNMIS, UNODC conducted an exploratory assessment mission to determine the kind of support that could be provided in the area of prison reform. The mission also looked at establishing a longer-term penal reform assistance programme.

In order to achieve sustainable reform, the project focuses on three areas:

Information management capacity development: "At present, the Prison Service functions with almost no reliable information on the prison population and its own staff," Shaw says. "As a first step, a survey of the current prison population will be carried out to understand its characteristics and the needs of the detainees. A new prison registry system and enhanced prisoner file system will be developed, while the Prison Service's ability to analyze and use data for planning and other management purposes will be enhanced."

The picture above, of a hand-written list of the number and type of prisoners currently incarcerated, illustrates the current state of information management in many Sudanese prisons.

Human resource development: "Senior officials need to be empowered through training to effectively manage the reform process," Shaw explains. To this end, a series of management training workshops is already underway covering topics such as administrative procedures, planning, international standards, and responding to the needs of prisoners with special needs, including women, children and the mentally ill.

Policy development and regulations: In order to improve the management of the Prison Service as well as to develop longer-term penal policies focusing on vulnerable groups, UNODC is providing expertise to support the drafting of relevant legal, policy and regulatory frameworks.

The project is funded by the Global Peace and Security Fund of the Government of Canada.