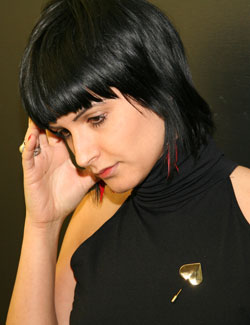 14 February 2008 - Roses, chocolates and frivolity.... .the very stuff of Valentine's Day lore. Or is it? As millions of lovers around the world celebrate Valentine's Day, labour rights campaigners are warning them that their traditional gifts may have come at a greater expense than they could ever imagine. Behind their romantic gestures is often a chain of trafficked human beings delivering disposable commodities to affluent consumers. Many are children toiling in inhumane conditions or women trapped in near-slavery.

Valentine's Day 2008 saw a new campaign to raise awareness about human trafficking launched at the Vienna Forum to Fight Human Trafficking, taking place from 13 to 15 February. Today, conference participants wore upturned heart lapel badges as a sign of solidarity with the victims of this crime. Just as the "blood diamond" and Fair Trade certifications have reached the consciousness, and more importantly, the pocket-books of consumers, the "Upset Heart" symbol can remind people they can make ethical choices.

Consumers need to put offending companies under pressure, said Steve Chalke of the "Stop the Traffik" campaign. He said that thousands of modern day slaves were working in Côte d'Ivoire's cocoa industry and it was time for consumers to buy more Fair Trade products. "If you eat chocolate that is not fairly traded you have blood on your teeth. Somebody else is dying for your luxury," said Chalke. "Our lifestyle is linked to others."

"Take exploitation out of your bottom line," said Antonio Maria Costa, Executive Director of the United Nations Office on Drugs and Crime (UNODC) in his opening speech to the Vienna Forum yesterday. "Make sure that the supply chain is not tainted by blood, sweat and tears of modern slaves."

"On this Valentine's day, spare a thought for those whose lives have been turned upside down by human trafficking", said Mr. Costa.