4 July 2008 - On 26 June, UNODC offices around the world held different events to celebrate the International Day Against Drug Abuse and Illicit Trafficking. On the same day, UNODC also launched its 2008 World Drug Report. Below a selection of some of the events that took place around the world.

Albania - Getting everyone involved

Leading up to 26 June, a radio spot developed by UNODC and the Institute of Public Health was aired on Top Albania Radio and Top Channel. T-shirts bearing the slogan "Do Drugs Control your Life? Your Life. Your Community. No place for Drugs" were also widely distributed.

On the day, 100 secondary school students from Tirana and peer educators from Pogradec gave artistic performances conveying the values of a healthy drug-free lifestyle. The Ministry of Health delivered certificates to peer educators that have significantly contributed to anti-drug efforts across the country.

In Sofia, UNODC with the local municipality, the Ministry of Interior and the Antidot Foundation hosted an event and invited several schools to attend. A quiz was organized for the children with prizes provided by UNODC and United Nations Development Programme (UNDP). School children also received anti-drug material from UNODC and the Antidot Foundation. A short concert followed with performances by children from the vocal group "Vrabcheta". 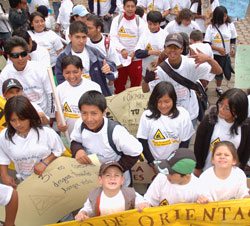 In Ecuador, UNODC and the National Drug Council, with the participation of several ministries, civil institutions and NGOs, hosted a "Festival for Life" in the Ferroviaria Alta neighborhood of Quito. Music and dance groups, trained dogs from the National Police and families from the neighborhood all participated in the festival, which was celebrated to the theme "Do drugs control your life?" 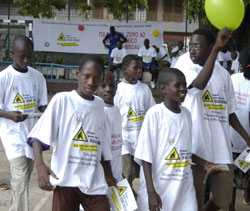 The UNODC Regional Office for West and Central Africa chose to mark 26 June through activities in Guinea-Bissau with active participation by the government, civil society and other UN organizations. On the day, the Minister of Justice addressed a large student group on the government's work to stop drug trafficking. Additionally, coverage by numerous TV and radio stations ensured that anti-drug messages reached large parts of the country.

More than 3,000 prisoners showcased their talent in New Delhi in different activities organised by UNODC and the Tihar Prison Administration. Leading up to 26 June, painting, poetry and writing competitions were organized across 9 prisons in the city. These concluded with a final event on 26 June that saw the prisoners perform in role-plays, songs and skits on drug abuse prevention. The performance was held before government officials, representatives from national and international organizations, the general public and the media. 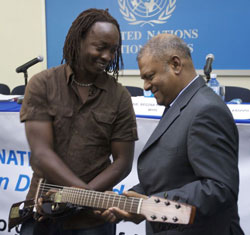 Kenya - A war instrument for peace

On 26 June, Kenyan singer and activist, Eric Wainaina, was appointed Messenger of Peace and handed an escopetarra . A namederived from the Spanish words for rifle (escopeta) and guitar (guitarra), an escopetarra is a firearm turned into guitar. The instrument represents the willingness of people to change and transform. Wainaina will use the instrument in his concerts as he continues to campaign for non-violence.

Nepal - Awareness-raising through the arts

A week-long awareness-raising campaign comprising rallies, sports and cultural events, street dramas, painting and poetry competitions was held throughout Nepal. Two popular actors, Rajesh Himal and Niruta Singh, were appointed by the Ministry for Home Affairs as Goodwill Ambassadors for the International Day Against Drug Abuse and Illicit Trafficking. 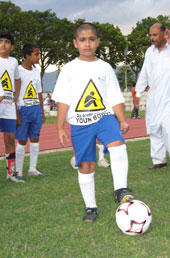 The "Do drugs control your life?" awareness campaign is off to a good start in Pakistan. So far, seminars, walks, talk shows on radio and television and various health activities have taken place. Moreover, innovative methods, such as presenting anti-drug umbrellas to the traffic police and printing anti-drug messages on millions of electricity bills have been used to reach a broad audience.

On 26 June, UNODC, in collaboration with embassies, government entities and the private sector, hosted an evening event where the main guest was the Narcotics Control Secretary,   Mr. K. B. Rind. A large number of families, young people, recovering addicts and members of the diplomatic community participated. 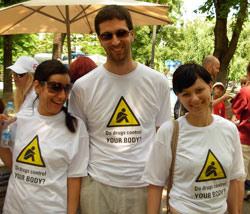 A nation-wide Drug Free Month campaign in Serbia ended with the marking of 26 June. The campaign, led by a local NGO "Kula", was supported by UNODC. Additionally, the Anti-Drug Day was marked under the slogan "Do Drugs Control Your Life?" in a joint effort with government entities, NGOs and international organizations.

A national campaign website was launched with the internet address: do-drugs-control-your-life (in the local language). In Belgrade, events on the day included festivities in the Belgrade Youth Park and a discussion on prevention, treatment and rehabilitation with a first-hand story from an former addict.

South Africa - One to one engagement

In Orange Farm, Johannesburg, UNODC and the National Department of Social Development (DSD) engaged with the residents of one of the most underprivileged areas of South Africa. The event brought around 2,700 people together and marked the 5th anniversary of the "Ke Moja, I'm Fine without Drugs" campaign - an initiative aimed at reducing drug use in the country.

The day started with a 5km "Fun Run" to raise awareness amongst residents, followed by a door-to-door campaign to enable grassroot engagement and a better understanding of the situation on the ground. Members of DSD, the Youth Commission and the Central Drug Authority addressed the crowd on the importance of anti-drug initiatives. Prominent entertainers engaged with residents, UNODC distributed bracelets and awareness-raising material, and local media covered the day's events.

As part of an awareness campaign, thousands of stickers reading "Fill me up with gas, not drugs" were distributed to use on motorbikes. Personalizing one's motorbike is very popular in Viet Nam, where more than every fourth person owns one. Raincoats specifically designed to be worn on motorbikes during the current rainy season were also distributed bearing the slogan "Do drugs control your life".