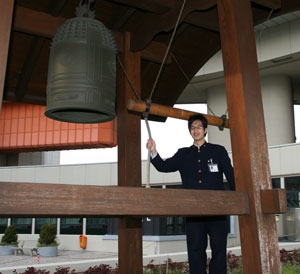 28 March 2008 - Six Japanese students active in their communities in raising awareness and funds to prevent drug abuse presented the results of a nationwide anti-drugs campaign at UNODC headquarters in Vienna yesterday.

Over the past year, students from across Japan collected nearly $170,000 for UNODC through a fund-raising drive organized by the Drug Abuse Prevention Center (DAPC). With this contribution, UNODC will support the work of grassroots organizations in developing countries.

Thanking the young volunteers for their contribution, UNODC Executive Director Antonio Maria Costa described their programme as "unique" and said that they "set an example for society at large." Mr. Costa expressed his appreciation for the students' hard work and commitment, which he "will never forget."

At a ceremony held at the Vienna International Centre, Mr. Costa also presented a certificate and a commemorative gift to each of the six students: Yuyu Fukushima, Chihiro Furukawa, Kenta Okamura, Akari Saioka, Genichiro Saito, and Haruka Tsubakihara.

To date, 99 volunteers have been named Young Civic Ambassadors and have travelled to Vienna to report on their activities. This year's Ambassadors, aged 14 to17, were chosen from the 13,000 students who were involved in the DAPC fund-raising effort.

Since 1994, Japanese youth and the DAPC have raised over $ 4 million, providing more than 400 grants to NGOs working in drug abuse prevention around the world. Francis Maertens, UNODC Director for Operations, said that "these grants reach thousands of people in need, who are vulnerable to drug abuse." Organizations and individuals in Afghanistan, Guinea-Bissau, Lebanon, Myanmar, Peru and many other countries have benefited from the programme throughout the years.

"Looking back, I'm very pleased with what we've done," said Shenzu Abe, Director of DAPC. "But now it's time to look at the current situation and how we can continue to fight the drug problem."