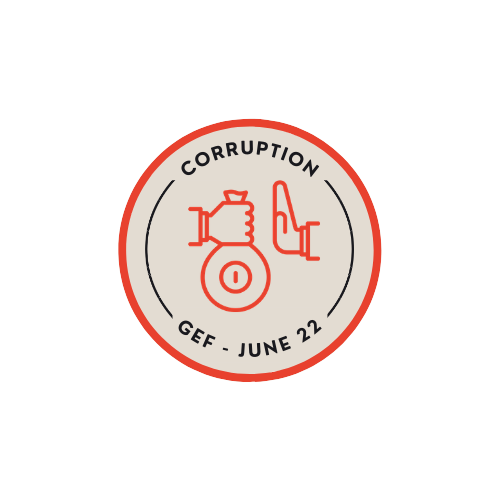 Panel 2 will be discussing the challenges and gaps to the rule of law and equal access to justice, and their impacts on women and girls, particularly in the context of eliminating gender-based violence during the COVID-19 pandemic and beyond. The panel will highlight the necessity of gender-responsive policing for men, women, boys and girls subject to violence and the importance of a victim-centred approach. The discussion will be further reflecting on the importance of the meaningful participation of women in police and criminal justice authorities; how this improves operational effectiveness and responses to gender-based crimes.

Learn about our Speakers: 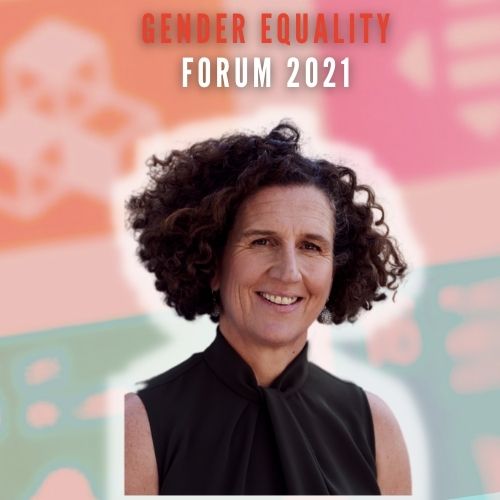 Managing Director
Georgetown Institute for Women, Peace and Security
Jeni Klugman is Managing Director at the Georgetown Institute for Women, Peace and Security and Senior Adviser at the Stanford University Center for Gender Equality. Dr Klugman's previous positions include fellow at the Kennedy School of Government’s Women in Public Policy Program at Harvard University, Director of Gender and Development at the World Bank, and Director and lead author of three global Human Development Reports published by the UNDP. She has published over a dozen books and major global reports, and (co)authored over 70 articles in peer reviewed journals.  She is currently a member of The Lancet Global Commission on Gender and Health.  She holds a Ph.D. in Economics from the Australian National University and postgraduate degrees in both Law and Development Economics from the University of Oxford where she was a Rhodes Scholar.   She was included in the Apolitical Inaugural List of the World’s 100 Most Influential People in Gender Policy in 2018. 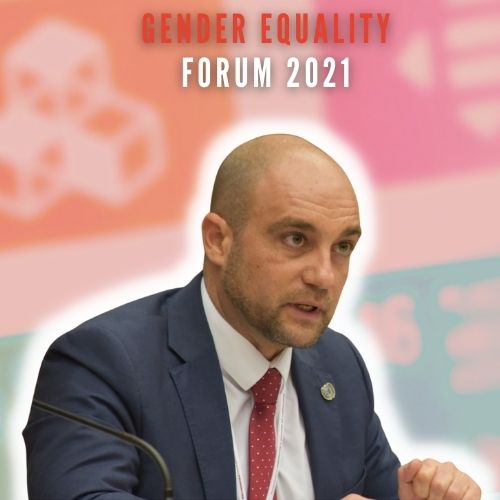 Portuguese national, Marco Teixeira, is currently the Head of Programme Office in Mozambique - Programme Coordinator. With extensive managerial experience with UNODC, he has led programme development and implementation in various positions previous leading the Global Programme for the Implementation of the Doha Declaration, coordinating the CRIMJUST programme with focus in tackling transnational organize crime and drugs. Previously he worked as Head of Section, Organized Crime, Illicit Trafficking and Terrorism on the Regional Office for West and Central Africa. He also led the work of UNODC’s field offices in Guinea-Bissau and Liberia. Before joining the UN Family he worked for the Portuguese Public Security Police with leading roles in criminal investigation units, that also including in a secondment to the UN Special Political Mission. Mr. Teixeira holds a Master’s degree in Psychology and a Bachelor’s degree in Police Science and several specialized post-graduated studies. 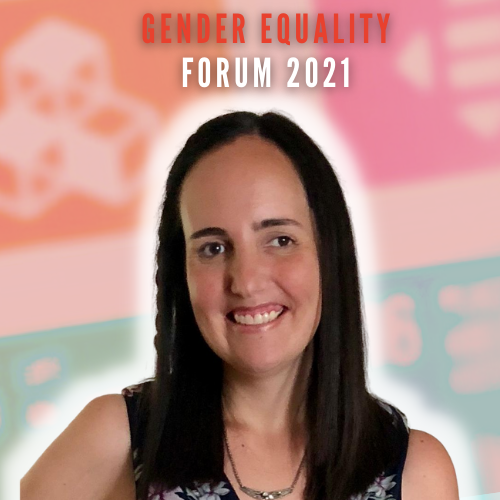 Isabel is a feminist activist. She is Co-Director of ​​the feminist organization Equis Justicia para las Mujeres A.C. She holds a Bachelor of Laws LL.B. with Honors from the Instituto Tecnológico Autónomo de México (ITAM) ITAM, a Master in International Law (LLM) with a specialization in Human Rights from the Washington College of Law of the American University and she is currently studying a Doctorate (PhD) in Social Anthropology from the Universidad Iberoamericana. focused on promoting comprehensive access to justice for all women, promoting a no punitive focus. She has worked in various institutions of public administration such as the National Institute of Access to Information, the National Human Rights Commission and the Permanent Mission of Mexico to the United Nations in New York. She has served as a researcher in projects related to the evaluation of the actions of the National Human Rights Commission. She is also a professor of Public International Law and Human Rights at the Universidad Anáhuac in Law School in Mexico City. 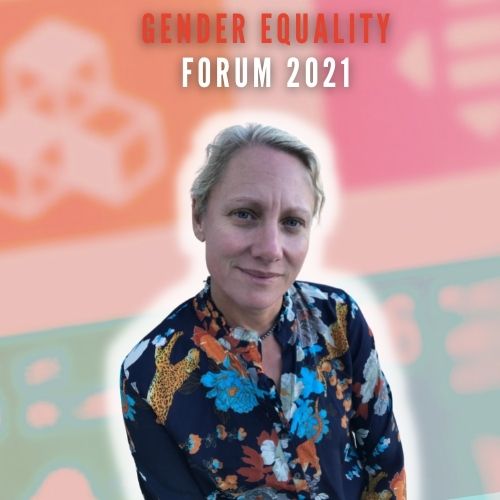 Gender  Advisor
UNFPA
Alexandra Robinson works as the Global GBV Advisor for  the Gender and Human Rights Branch of UNFPA Headquarters. She comes with almost a decade of experience with UNFPA in the Pacific regino as well as in Myanmar working to design and implement programmes to end gender-based violence inhumanitarian, peacebuilding and development programmes. Alexandra also has a background in humanitarian contexts working in a range of humanitarian contexts with UN and local organisations in Ethiopia, Darfur, Papua New Guinea and Sri Lanka.  Alexandra is an Australian trained lawyer having worked in the Australian public service, Commonwealth Director of Public Prosecutions and Legal Aid. She was also the principal solicitor of the Pilbara Family Violence Prevention Legal Service working closely with Aboriginal communities.  As well as being a current PhD Candidate in the School of Law at the University of Tasmania (focusing on laws and governance to support gender responsive climate change), she possesses double degrees in Law and Social Sciences from the Queensland University of Technology and the University of Queensland and a Masters of Law (International Law) from the Australian National University. 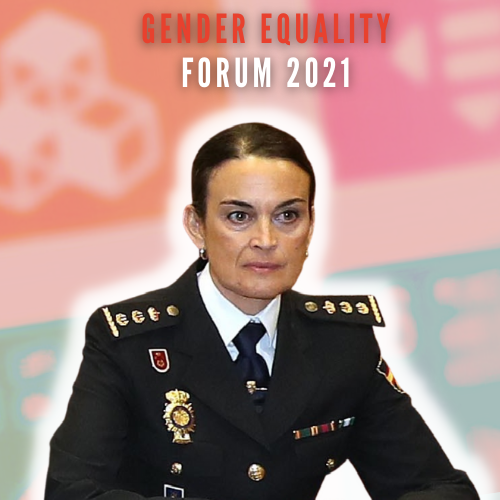 Commissioner Head of the Human Rights and Equality Area

Ministry of Interior of Spain

Dolores López Sánchez, is a Comissioner in the Spanish “Policía Nacional”, and the Head of the Area for Human Rights and Equality, which contains the National Office for Gender Equality and the National Office for Human Rights. Before she held this position, she was Head of the Operative Brigade of the Central Unit for Family and Women Care and Attention (2015-2017) and Head of Brigade of the Central Unit for Illegal Migration Networks and Document Fraud (2017-2018). Apart from her Law Degree, Dolores has a Master on Strategic Management in the Public Security (2017), and has participated in several UN activities, e.g.: UN Gender Advisers Course – Jordan (2018).
Nowadays, the Area she leads, works as the National observatory for gender equality, ensuring equality of professional opportunities between women and men in the police institution, and making reports on the gender impact of the measures and policies developed within this institution. It also coordinates a Gender Equality Training Plan for National Police personnel, and carries out diagnostic studies on the situation of gender-based violence, sexual harassment and other forms of discrimination in the National Police. At an international level, the Area takes part in exchanging information and communications with public and private institutions (e.g.: UN mechanisms, Council of Europe, Spanish Ombudsman, etc.).

Learn about our Moderator: 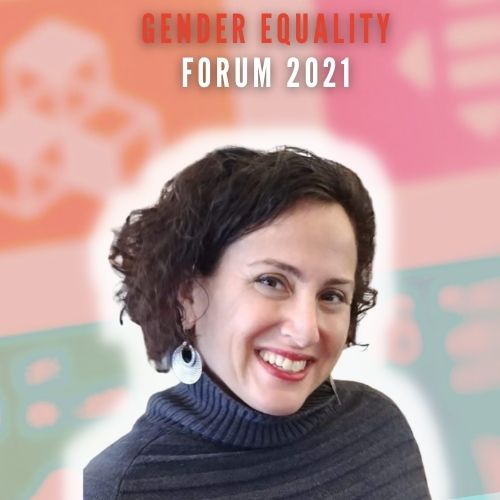 Maxine Marcus is an international criminal prosecutor and investigator with 23 years’ field based and courtroom based experience in international criminal law. Her field work includes Chad (for Darfur), Sierra Leone, Bosnia and Hercegovina, Hungary, Kosovo, Ingushetia/Chechnya, Ivory Coast, Ethiopia (Gambella), Guinea, Kenya, the Phillippines, and Guatemala. She served for nine years as a prosecuting attorney at the ICTY on four cases including the Mladic Case. From 2003 to 2005 Ms. Marcus served as investigating attorney for the Civil Defence Forces prosecution team in the Special Court for Sierra Leone. In November and December 2009 Ms. Marcus served on the UN Commission of Inquiry for Guinea as the Gender and International Criminal Law Adviser, and from April to June 2014 she served as Senior International Criminal Law and Gender Adviser to the UK Foreign and Commonwealth Office on their Prevention of Sexual Violence Initiative, and as Senior International Criminal Law Advisor to the UK Protocol on Documentation of Sexual Violence in Conflict. From December 2014 to March 2015 Ms. Marcus was senior SGBV advisor to the OHCHR Fact Finding Mission for Sri Lanka, and from July to December 2015 she served as Senior Legal Investigator to the UN Secretary General’s External Panel on Sexual Abuse by International Forces in the Central African Republic.