“We were surprised and grateful to see how much initimacy, trust and solidarity the initiative fostered between the participants " 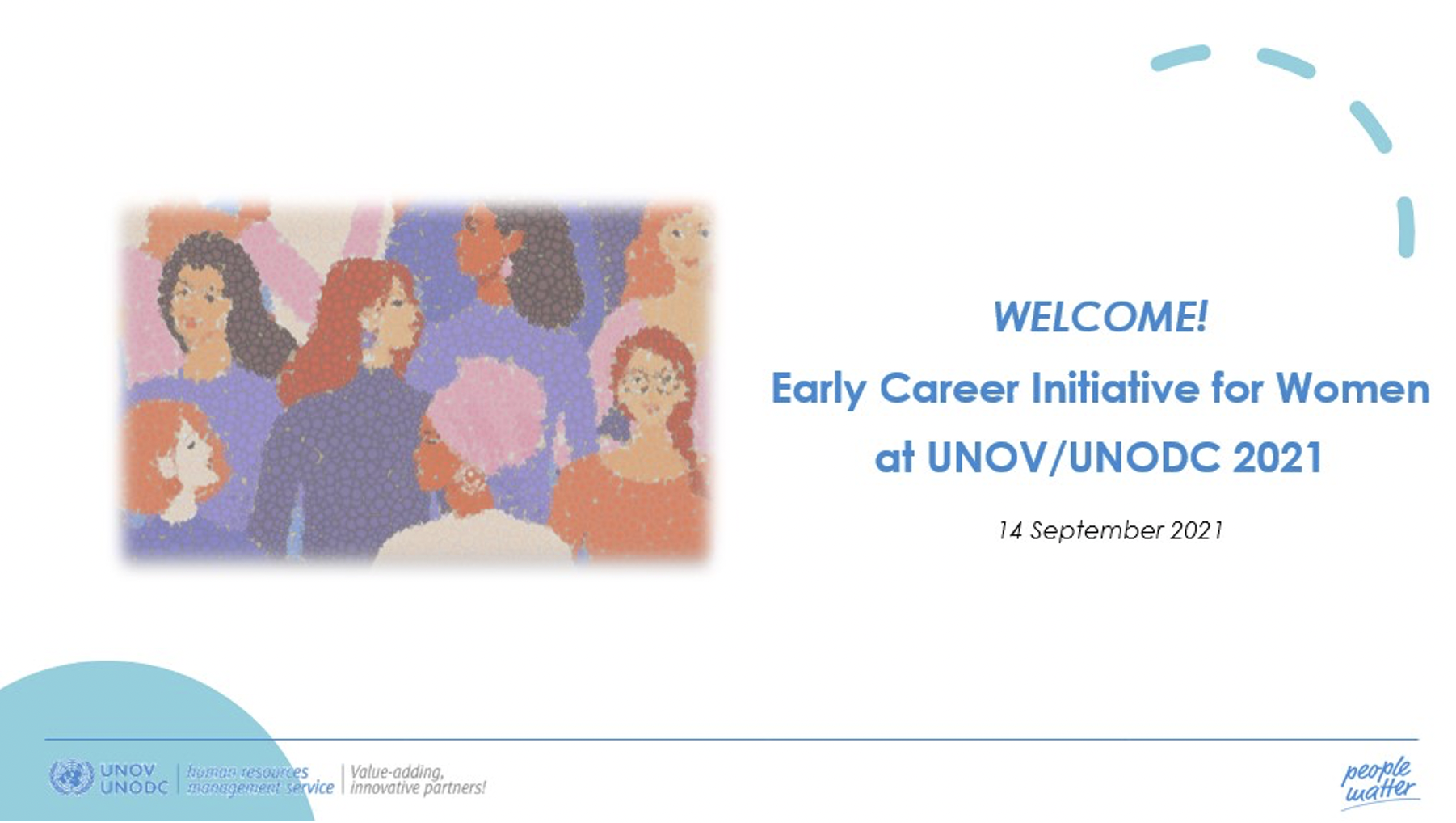 Bettina Feichtinger and Anna Pfeiffer are part of the Staffing, Diversity and Outreach Section (SDOS) of UNOV/UNODC Human Resources Management Section. Their team won the Award in Category 1:Promoting an enabling work environment at UNOV/UNODC, for its “Early career initiative for women”.

From September to December 2021, 45 women from headquarters and the field offices attended a virtual programme aiming to actively reflect upon and develop their individual career paths in the organization. Thanks to mentoring sessions with senior female partners and the coaching sessions offered by the Talent Development Team of HRMS, the participants were provided with support, knowledge and a new network of peers and seniors to empower them in their career progression.

Four months after the wrap up of the initiative, Bettina Feichtinger, Chief of SDOS, and Anna Pfeiffer, then Diversity Coordinator and now leading the Talent Development Team in HRMS, joined us to discuss the spontaneous start of the project, the enthusiasm it created and their hopes for the future.

The Day That Started it All

Bettina Feichtinger: My name is Bettina Feichtinger, Chief of SDOS, and I have been working in the area of human resources at the United Nations for the last twenty years, and with UNOV/UNODC for ten years. The changing trend in the area of human resources over the last years can be seen in the change of my title. My original position was titled ‘Chief of Recruitment and Replacement’, and with the focus having shifted to diversity, my position is now called ‘Chief of Staffing, Diversity and Outreach Section’.

Anna Pfeifer: My name is Anna Pfeiffer and I joined UNOV/UNODC as a Junior Professional Officer in 2019 after completing a PhD in organization studies. While working at the university, I focused on workplace culture topics, including diversity management and women and leadership. Wanting to work outside of academia, I joined UNOV/UNODC as a Diversity Coordinator and it has been rewarding to see the growing interest in new topics related to diversity, such as disability inclusion, gender parity and geographical diversity.

Bettina Feichtinger: For International Women’s Day 2021, we wanted to do something meaningful for our female colleagues. I recall exactly where I was sitting at home when we first thought of this! Anna and I were talking about this during a spontaneous brainstorming session, and we were discussing how gender parity had not, at the time, been achieved at the P4 and P5 levels in UNODC. We thought that the talent pool for these senior management positions needed to be strengthened somehow...

Anna Pfeiffer: Shortly before Covid-19 hit, there had been an initiative for early and mid-career colleagues in field offices to come to Vienna for a week to receive training on how to develop in their career. In 2021 with the pandemic, there was no possibility to do this again, but chatting with Bettina, we thought that since everything was now taking place online, we could organize a few sessions that would not cost any money. We decided to dedicate it to female colleagues only, who were still in the early stages of their career, as no such initiative existed at the time.

Bettina Feichtinger: When we announced the initiative to all staff and personnel on International Women’s Day, we were thinking that we would just organize a few webinars and put some kind of framework around it. But as we launched it, the project just took on a life of its own.

Anna Pfeiffer: Indeed, we got so many applications. We received long motivation letters that made us realize how needed such an initiative was. We could unfortunately not accept all applicants, as we wanted to make sure that we delivered a high-quality program. But these applications were a real eye-opener, both very humbling and very motivating.

Bettina Feichtinger: Seeing this high number of applications, we decided to create two cohorts, as we could not handle all the 70 applicants at once! Anna’s background in academia and gender helped a lot, as she could bring forth the expertise on creating the outline of the program as well as content for some of the sessions. Eventually, it worked out well with the  two cohorts, as it allowed participants from more than 25 countries to join us on different time zones. And although we were worried about holding the sessions online, we received many messages thanking us for the space that we had created. It made it clear that many colleagues were struggling with similar issues with regards to professional development. Participants even offered to work on certain  issues of work/life balance or maternity provisions. We focused on the topics that we were knowledgeable on, asked some experts on other topics to deliver some sessions, had some inspirational senior speakers from around the UN system, and hired an external consultant for the first and the last sessions – this was our only cost. We also received a lot of help from senior female colleagues in UNOV and UNODC who agreed to “partner” with  our participants during the course of the initiative. In the end, many of the senior female colleagues also told us that this was a great learning experience, and we are all very grateful for the time and advice they dedicated to us.

Anna Pfeiffer: We were indeed surprised and grateful to see how well a virtual initiative could work and how much intimacy, trust and solidarity it fostered between the participants. As a facilitator, I was never left alone: there was always input from the participants. It was an interactive virtual space and that really stuck with me. It allowed for this project to take an unexpected scope. While it was challenging for us both to find time, and we organized each session along the way with no administrative support and a lot of balancing of our priorities, eventually everything came together. On that note, I was very happy that senior female partners and our colleagues from HRMS jumped in to share their experiences either directly with the early career participants or during the webinars. The solidarity across different bodies of the organization was really nice to see.

Bettina Feichtinger: For the future, I wish we would have more possibilities to dive deeper into the topic of professional development for female colleagues, as well as more time and resources. We would love to keep things going with these last two cohorts that we have had already and we plan to offer the programme again this year, but we do have a key lesson learnt: two cohorts are a lot to plan for at the same time, and we may not want to do that again.

Anna Pfeiffer: And although we were surprised about how well it worked virtually, it would be great in 2023, to have some parts of the programme in-person, or to have discussions on key topics in a day-long workshop where for example alumni could participate. There is neither a lack of interest, nor of relevance for these types of initiatives.