In Conversation with: Ambassador Corinne Kitsell 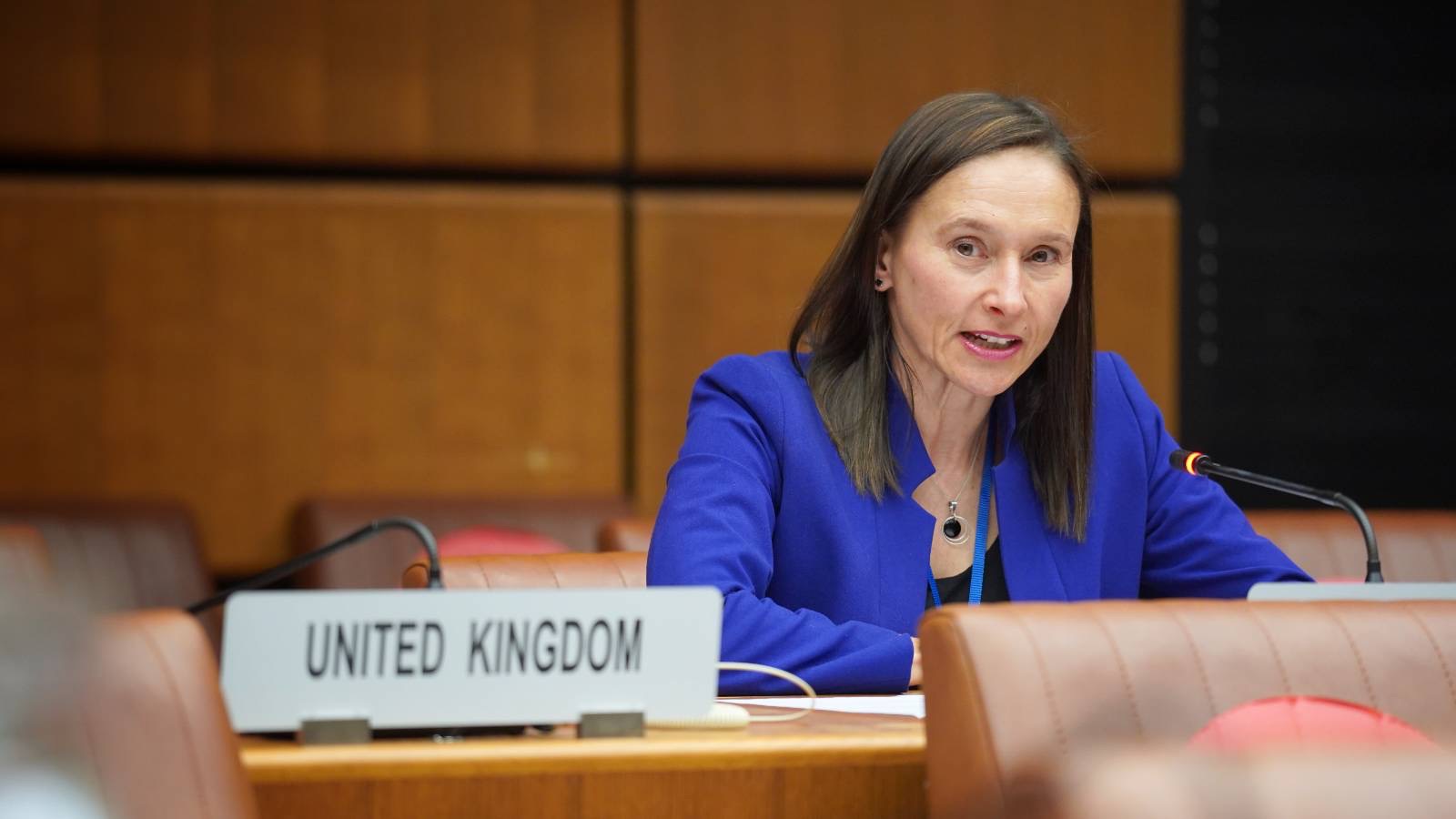 Vienna, April 2022-  Ambassador Kitsell joined the UK Mission in Vienna in October 2020. She has been a strong advocate for gender equality and women's empowerment throughout her career and has been an International Gender Champion since 2021. Ambassador Kitsell and Ambassador Ruiz from Colombia have recently become the first chairs of the informal UNODC Group of Friends for Gender Equality and aim to strengthen gender mainstreaming efforts throughout the work of UNODC.

In this interview read about Ambassador Kitsell's motivations, her extensive career working on gender issues within the UK Foreign Ministry and her expertise as the first co-chair of the Group of Friends for Gender Equality.

Gender Bulletin: What was the "a-ha" moment when you realised the importance of promoting gender equality in your area of work?

Ambassador Kitsell: I think that my a-ha moment probably came at the beginning of my career. When I was at school, I was part of a generation in the UK where there was the idea that you can do anything or be anything that you want regardless of your gender. But when I first started my career in the Foreign Ministry there were almost no senior women and there were almost no female ambassadors. I realised that something definitely needed to be done.

When I was a very young diplomat, I was lucky enough to be part of the UK delegation to the UN Conference on Women in Beijing in 1995. I do not think I appreciated at the time how significant this moment was - I was in the room when Hilary Clinton gave her iconic speech! The conference resulted in the Beijing Declaration and the Platform for Action and it seemed as if gender equality was sorted. It was a period, in the early 1990s after the end of the Cold War, when there was a real optimism about multilateralism. Despite this, even though there have been lots of improvements for women worldwide, we have not made as much progress as we thought we would by now and there is still a lot more to do. I wanted to be an active part of that change. That is why I was keen to do become an International Gender Champion when I arrived in Vienna and this of course led me to co-chair the Group of Friends for Gender Equality.

Gender Bulletin: You have had an extensive career working with international organisations and on foreign affairs, how do you believe that the landscape and approaches to gender equality and women's empowerment have developed, specifically in your respective country?

Ambassador Kitsell: I think there has been significant progress in the UK, especially if you look at it from a historical perspective going back to the suffragettes who fought for the right for women to vote in public elections in the UK more than a hundred years ago. Domestically, the most recent significant progress was in 2010 when the UK passed the Gender Equality Act. Under the act, we in the UK are legally obliged to consider gender equality in all the programming that we do. This includes our multilateral programme work in international organisations including UNODC. Certainly, for the UK Foreign Ministry, gender equality and the empowerment of women is mainstreamed throughout all our work. In the UK Cabinet Office, we have the Government Equalities Office who led the work on implementing and monitoring the Gender Equality Act, including our international commitments on gender equality and women's empowerment.

In the UK the frameworks for mainstreaming gender are in place but there is still a long way to go. Just to give an example, in the UK there is the commitment to eliminate gender pay disparities and there is now the legal requirement for all organisations that have over 250 employees to publish data every year on their gender pay gap. The data has shown that there is still more to do domestically. For example, in the UK, like in other countries, there are more women studying law at university than men. Despite this, many women leave the criminal justice system in their 30s to start a family. That being said, in the UK we have a good paternity provision and maternity leave, so the formal processes are there. The challenge continues to be the softer stuff, such as stereotypes. There are still things to be done but we also recognise that we are doing well.

Gender Bulletin: When you started in the Foreign Ministry you said that there were a lack of senior women, has that changed?

Ambassador Kitsell: Female ambassadors were very unusual, and the few that did exist were mostly single. They had to dedicate themselves to their careers. I remember finding out that it was only in the year 2000 that there was the first female British ambassador who had children. I remember being shocked by that.

Our previous Permanent Secretary was very committed to tackling this. He created something called the 'mirror challenge' in our Foreign Ministry headquarters in London. This is a display of the 25 most senior jobs in our organisation including ambassadors in places like Washington, Paris, Tokyo, the UN in New York and the most senior jobs in London. When the job has been done by a woman there is a picture of the woman on the wall and where no woman has ever filled that position there is a mirror. The idea is for younger members of the foreign service to look at the pictures and to look at themselves in the mirror to envision themselves in a senior position in the future.

We have made progress and have reached a point where all of our ambassadors in the G7 countries are women. We have female ambassadors in Paris, Berlin, Rome, Ottawa, Washington, the UN in New York, Tokyo and Beijing. I think the percentage of female ambassadors has not yet reached 50% but it has gone from almost nothing to roughly 40% in the space of 20 years.

Gender Bulletin: Have the discussions changed with the increased representation of female ambassadors?

Ambassador Kitsell: In the mid 1990s, when I first worked at the UK Mission to the UN in New York, all the senior people were men and there was more of a macho approach to negotiations. I think that having women in the room brings a different perspective. I am sure it was very difficult for the first women when they were alone in the negotiations. It also happens to be the case that the current UN ambassadors in Vienna for China, Russia, France, Germany, Italy and Canada are all men, so you find yourself in male dominated meetings, but I have never had a problem with that.

Gender Bulletin: You have now been the co-chair for the Group of Friends for Gender Equality for nearly half a year. What inspired you to co-chair the group and what do you hope to achieve?

Ambassador Kitsell: From a personal perspective as an International Gender Champion, I think it is very important to look for practical actions to integrate gender. But there are also a growing number of Member States who have ideas and objectives to bring a gender perspective into the work that we do at UNODC. However, we have had no means to coordinate this. There was a need to create an informal group to coordinate these activities.

It was important to us that it wasn't just the UK chairing the group, so we are very pleased that Ambassador Ruiz, a male ambassador, was keen to join as well. It has given us an opportunity to bring people together and to encourage a chorus of voices. Trying to help some of the smaller Missions with information and to give them the confidence to speak up is important. This way we have a chorus of voices from a diverse range of countries and a diverse range of regions. We are hoping that the membership of the Group continues to grow, and we are starting to consider how we can bring in voices from civil society organisations and NGOs. There is a lot that we can do and there is a limited amount of time, so we do not want to get carried away. Ambassador Ruiz and I have worked hard to create something, get it going and for it to be in a good position to pass on to the next set of co-chairs to take it forward.