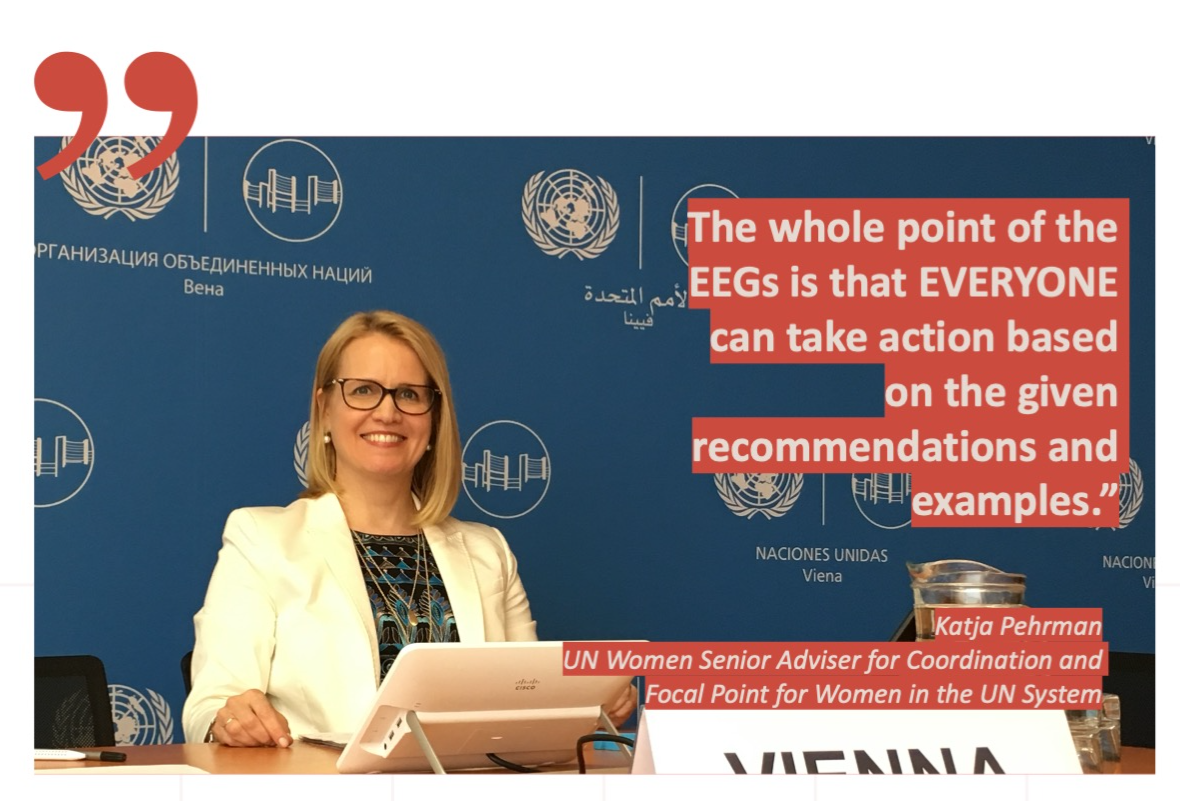 Vienna, October 2020 - The Enabling Environment Guidelines (EEGs) for the United Nations System were developed in 2019 in response to the Secretary General’s Gender Parity Strategy. The EEGs provide UN system-wide guidance on the creation of an enabling environment that promotes a more diverse, inclusive and respectful work environment—both as a precursor to achieving gender parity and a key to sustaining it.

Marking the one-year anniversary of the EEGs launch, the Gender Team interviewed Katja Pehrman, Senior Adviser and Gender Focal Point at UN Women, on the process of developing the EEGs, their role in the light of the COVID-19 pandemic and her personal vision for the future.

Gender Bulletin: Prior to your position as a Senior Advisor Position with UN Women, you had a distinguished career in the service of the Finnish Ministry of Foreign Affairs. How does working on gender equality issues at a national context compare to working on these issues for the UN?

Katja Pehrman: It was a great pleasure to work for a government that actively promotes gender equality in all its foreign and security policies. The Finnish MFA, through its prioritization on gender issues, has truly shown leadership by raising awareness and speaking up for women’s rights and also by “walking the talk”, by providing resources to different international organizations for activities focusing on gender equality. Enhancing gender equality and human rights have constantly been at the forefront of my work throughout my career. This was true for instance when negotiating various resolutions and ensuring that these were gender inclusive, as well as negotiating specific decisions on gender equality and women’s empowerment.
As an Ambassador, promoting gender equality and women’s empowerment was however among many issues that I had to follow. At UN Women I have been able to focus entirely on gender equality and the empowerment of women from the perspective of its three-pronged mandate; normative, operational and UN system-wide coordination. The latter is especially relevant to my position as Senior Adviser and Focal Point for Women, as my department coordinates the work of nearly 400 Gender Focal Points across the UN system. I truly enjoy this work, as it gives a very good understanding of how the different UN entities are progressing towards gender equality and gender parity. Against this background, my work with UN Women is perhaps more concrete and “hands-on” compared to my previous work.
I consider myself very lucky to have been able to work for both, because we all have the same objective at the end of the day, just the means might be different.

Gender Bulletin: When did you first become aware of the importance of gender equality? Did you experience some kind of “a-ha” -moment that impacted your professional life?

Katja Pehrman: I became aware of gender stereotypes at a very young age. For instance, at school I was supposed to take sewing classes even though I was more interested in woodwork classes which were meant for boys only.  Luckily, I come from a family with strong and independent women. My mother and my grandmother always underlined that asa woman you can do whatever you want, nothing is impossible. They taught me not to let gender stereotypes limit my aspirations in life. The importance of enhancing gender equality becomes crisp and clear in working life. My close friends and I joke that as a woman trying to build a career you are at first considered to be to ‘too young’ for a position until seamlessly, one day you are all of a sudden ‘too old’ for a position– not because of missing qualities, but because of how women of different ages are viewed. I don’t think this kind of ageism is quite as prevalent for men. It is important to be aware of the different context - often unconscious - that women and men operate in and to constantly question it.

Gender Bulletin: The concept of an enabling working environment can be broad and mean many different things in different settings. Is there anything that you would like to single out in the UN approach as especially successful?

Katja Pehrman: It is about creating a working environment that embraces equality, eradicates bias and is  inclusive of all staff. The buy-in of senior management is crucial; as we have seen with the difference that the active support of the Secretary General (SG) makes. For the SG gender parity is not just about numbers, but  about changing organizational culture. This corporate transformation is the essence of the Enabling  Environment  Guidelines (EEG). In creating the EEGs, we made sure that the process was as inclusive and participatory as possible to have the buy-in from a spectrum of UN entities that could support the drive for an organizational change. The Gender Focal Point Network was actively involved and contributed with excellent ideas from their perspective entities. Other parties involved were HR Network, UN Globe and the Inter-Agency Support Group for the Convention on the Rights of Persons with Disabilities. Throughout the whole process we were advocated for the “One UN” approach and it really worked. We got such different perspectives and we were able to push and  inspire each other.

Gender Bulletin: What were the main challenges you encountered when developing and implementing the EEGs? And how did you overcome these challenges?

Katja Pehrman: Going from the theoretical to the practical is always a challenge. Ensuring that the EEGs are actually implemented across the UN system is a challenge in itself.  The EEGs aim to change the organizational culture, this takes time, especially if the whole UN is involved. In theory, every UN entity should be able implement the guidelines based on the priorities of their organization. UN Women is pleased to support entities with their implementation however we cannot enforce it. We can inspire UN entities, we can try to empower them, we can try to move the needle in the right direction– but we cannot do it alone. This is why we really need everyone involved: All levels of leadership, Human Resources and every single staff member of the organization. We recognize that the success of the EEGs is a joint effort.
Another lesson learned is the importance of communication, which I cannot emphasize enough. For any system-wide effort you need targeted and constant communication. Communication brings awareness and inspires colleagues to take action. We need to find targeted and creative ways of communicating to evoke that involvement. It is not enough to just send one or two emails.

Gender Bulletin: The pandemic and its aftermath are far from gender-neutral and have a disproportionate impact on women and girls, already suffering from systemic inequalities. Not only does this show that programmatically, the UN must continue to help its Member States in achieving gender equality, but also looking internally in the UN a lot of work remains to be done. In the light of this situation, how important are the EEGs and why?

Katja Pehrman: Whenever there is a crisis situation, whether that is a political crisis or armed or any other kind of conflict, gender issues tend to fall to the wayside. I have experienced this myself where I have had to push for the inclusion for gender issues, sometimes to the annoyance of some colleagues who believe that gender equality issues can wait until the crisis is ‘under control’ or over.
This is not an option of course, as gender aspects are part of any situation and they can’t be put off until later. We have to recognize that crises have a different impact on women and men and the response needs to address these differences, as has been underlined by the UN SG Guterres, our Executive Director Mlambo-Ngcuka and UNODC Executive Director Waly. They have continuously raised how disproportionally women and girls have been hit by the pandemic and have made it clear that it is not enough to discuss gender equality issues once the worst of the global crisis has passed. In order to have an efficient crisis response we have to integrate and mainstream gender into everything that we do.
The working environment becomes part of this as well. The Enabling Environment Guidelines are in fact more important now than ever: I do recognize that it might be more difficult to create an enabling working environment when everyone is teleworking in different parts of the world, but that is exactly why we need to pay attention to this.  We need to understand the realities that women and men face when working under these circumstances and ensure that we can cater to their needs.

Gender Bulletin: What can Member States and the private sector learn from the UN approach to gender parity?

Katja Pehrman: The goal of gender parity is enshrined in the UN Charter as well as in the Universal Declaration of Human Rights: there can be no distinction or discrimination on the basis of gender. Therefore, achieving gender parity and equality is a human rights issue; strengthening the rights and status of women also promotes economic development and well-being. And this applies to the rest of the world as well.
A lot of research has been conducted on diverse workplaces which has shown that you are more likely to perform better in diverse teams and companies. Diversity leads to different questions being asked and contributes to increased creativity. It also leads to higher employee engagement and employer retention. People feel happier, more included, safe and committed. Hence, my statement that it is not only the right but also the smart thing to do.

Gender Bulletin: The EEGs are only recommendations. What are the necessary "next steps" that must be taken by senior management to ensure that the EEGs reach their full potential?

Katja Pehrman: We need true engagement from leadership. Through the SG’s dedication, for the first time in the UN’s history gender parity has been achieved at the highest levels, in the Secretary-Generals Senior Management Group, as well as among Resident Coordinators. This shows that effective leadership engagement does pave the way for gender parity.
Secondly, I think that the recommendations and objectives of the EEGs should be included in organizations’ strategic framework and making them performance indicators for the staff. This way, we would be able to monitor and report the progress of our efforts. Without it, we will not have the necessary data to asses, whether the organizations are moving ahead. Also, it is a question about accountability.

Gender Bulletin: Not only senior management must do their part. What are the most concrete actions that every single UN employee can take to support gender equality?

Katja Pehrman: First of all, everyone’s contribution is needed. An issue that is brought up to me often on the part of staff is the feeling of helplessness. The whole point of the EEGs is that everyone can and should take action, supported by the recommendations and examples we have developed.
Everyone can find information about their own organization’s gender action plan and give suggestions on how to create enabling environments that are inclusive and diverse. Please feel empowered to do so, speak up and suggest as well as learn to be a good bystander. Be active, take action. The Gender Focal Point Network and my office are there to support colleagues and anyone interested in these issues.

Supplementary Guidelines on the EEGs