Launch of the UNODC/UN Women Gender and Organized Crime Module 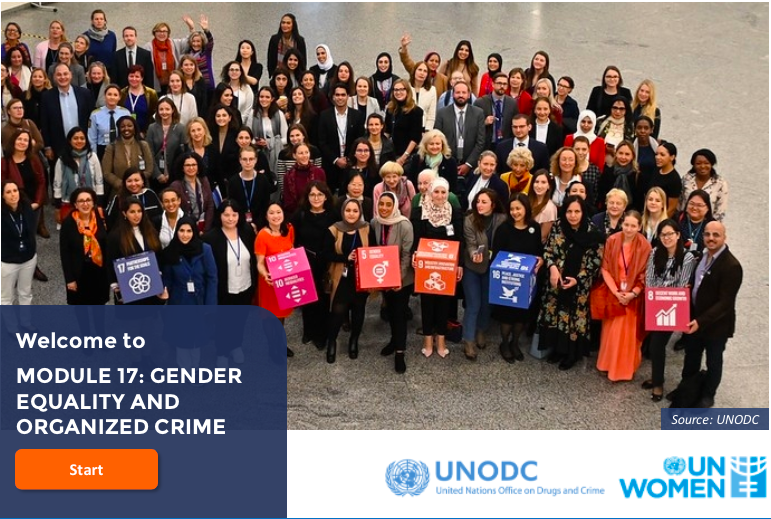 Vienna, May 2022 - UNODC and UN Women launch a new module explaining why gender aspects are important when combatting organized crime. Books, movies and TV series often portray organized crime through famous crime bosses, macho male-only gangs, guns, drugs and violence. When women are depicted it is most often as victims, mothers or lovers.

But what does this look like in reality? What is the involvement and impact of women and men on organized crime?

Studies paint a more complex picture which goes beyond traditional gender stereotypes. They illuminate the gender-specific experiences of individuals as perpetrators, suspects and accused as well as victims, witnesses and survivors who seek justice. Making it clear that in order to develop efficient policies and strategies tackling organized crime, that do not suffer from blind spots due to ingrained preconceptions of the role of men and women, gender aspects have to be integrated into all responses.

To explain the role of gender in preventing and combatting organized crime and to support practitioners working in the field, the UNODC Gender Team in collaboration with UN Women and with the support of the Government of Australia, have developed an introductory online module on gender and organized crime, based on international law and UN standards and norms.

The self-paced, interactive module seeks to explain why gender considerations matter when discussing organized crime and criminal justice responses. It aims at increasing knowledge and awareness of the basic concepts related to gender equality and women’s empowerment in relation to organized crime. It explains the ever-changing phenomenon of organized crime, what it is and what it is not; dimensions of gender norms, roles and relations; the importance of intersectionality; the constructs of masculinity and UNODC’s efforts in tackling organized crime.

The online module is intended for law enforcement and criminal justice practitioners who investigate, prosecute and adjudicate organized criminal cases; and for the general public and all UN staff and personnel, whether they have a background in gender equality or not.