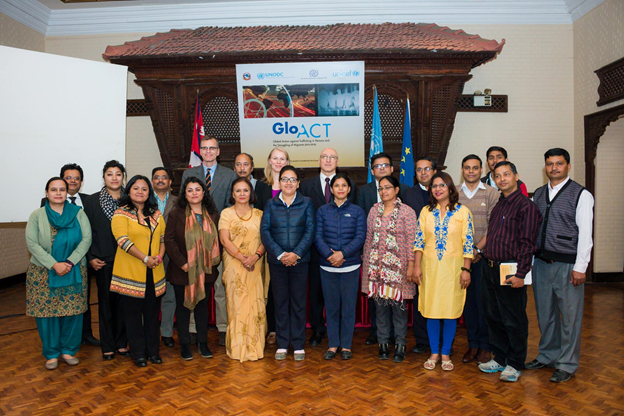 Human trafficking in Nepal is diverse, internal and transnational.

The latest report on Trafficking in Persons from Nepal’s Human Rights Commission estimates that around 35,000 people, including 15,000 women and 5,000 girls, were victims of this crime in 2018.

“The main forms of trafficking are for the purpose of sexual exploitation, forced labour and removal of organs,” says Binija Dhital Goperma, UNODC’s Programme Coordinator in Nepal.

“Nepalis working abroad or planning to migrate and girls and women from rural areas with limited economic opportunities are most vulnerable to the tricks of the traffickers, which include fraudulent practices and fake promises.”

Cases of human trafficking occur in in the entertainment and hospitality sectors, in brick kilns and garment industries, in agricultural and domestic work, she adds

But now, Nepal is better equipped to address this crime and protect its victims as the UN’s Protocol to Prevent, Suppress and Punish Trafficking in Persons came into force this month in the country.

“This a great step forward in Nepal’s efforts to prevent human trafficking,” says Ms Goperma. “It also shows that there is real commitment from the side of the government to tackle this crime.”

UNODC has been advocating for Nepal to accede to the Protocol since 2009 and has supported the government throughout the ratification process.

The Protocol, which was adopted by the United Nations in 2000,is the first global legally binding instrument with an agreed definition on trafficking in persons.

This definition provides a vital tool for the identification of victims, whether men, women or children, and for the detection of all forms of exploitation which constitute human trafficking.

Countries that ratify the Protocol are under a legal obligation to introduce national anti-human trafficking laws and criminalize trafficking. They must ensure that victims of human trafficking receive protection and are not treated as criminals.

“Nepal will now need to amend its laws on human trafficking and align them with the legal framework and definitions of the UN’s Protocol,” explains Binija Dhital Goperma.

Such amendments will bring benefits for victims of trafficking, including more recognition of the hardships endured, better access to support services and a guarantee that their full human rights will be respected.

“For example, cases of forced labour which happen abroad are currently tried under the Foreign Employment Law, which has lesser penalties for the perpetrators and less compensation for the victims,”

says Ms Goperma. “In future, these cases will come under the Human Trafficking Law.”

The Alliance Against Trafficking in Women and Children in Nepal (AATWIN) welcomes the ratification of the Protocol.

“Human trafficking is a global phenomenon, so we strongly believe that national laws, rules and regulations, policies, and working methods should be in line with international practices and standards,” says AATWIN Executive Director, Benu Maya Gurung.

“We’re hopeful it will increase the number of prosecutions as well improve the access to justice for the victims and make the government more accountable for the protection and rehabilitation of survivors,” she says.

UNODC assists countries to ratify and implement the Protocol, which has so far been ratified by 178 countries, and uphold the commitments enshrined in this international treaty.