Punishing traffickers, not victims – ICAT launches an Issue Brief on the non-punishment principle for victims of human trafficking

Vienna – 6 April 2020 - The Inter-Agency Coordination Group against Trafficking in Persons (ICAT), a lead policy mechanism to coordinate anti-trafficking responses within and beyond the UN system, has released an Issue Brief on Non-Punishment of Victims of Trafficking. 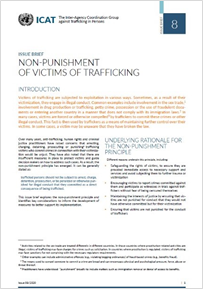 The Issue Brief, which represents the collective output of ICAT’s 25 entities, provides recommendations that states and practitioners can consider to achieve a more consistent, human rights-based application of the principle, which generally provides that trafficked persons should not be subject to arrest, charge, detention, prosecution, or be penalized or otherwise punished for illegal conduct that they committed as a direct consequence of being trafficked.

These recommendations include, for instance, action to:

Victims of trafficking in persons are exploited in numerous ways and may be forced or otherwise compelled by traffickers to commit crimes or other illegal conduct. Common examples include involvement in prostitution, engagement in drug production or trafficking, petty crime, possession or the use of fraudulent documents, or immigration-related offences. This fact can then be used by traffickers as a means of maintaining further control over their victims.

Anti-trafficking, human rights and criminal justice practitioners have raised concerns that arresting, charging, detaining, prosecuting or punishing trafficking victims who commit crimes in connection with their victimization would be unjust. However, there are insufficient measures in place to protect victims and guide decision-makers on how to address such cases.

“Implementing the non-punishment principle at the national level is critically important to ensuring just outcomes for victims and for holding offenders accountable,” noted UNODC Director of Division for Treaty Affairs John Brandolino marking the release of the ICAT’s paper. “UNODC was pleased to support ICAT in developing this important publication, which contains practical advice for policy makers looking to address this issue in their country,” he added.

The non-punishment principle first emerged during the elaboration of the UN Trafficking in Persons Protocol, whose adoption 20 years ago has sparked significant action, including on the non-punishment principle. However, progress has been uneven, and its implementation has been intermittent. Failure to apply this principle can adversely impact victims, undermine their rights, discourage reporting and cooperation with investigations and prosecutions and can negatively affect the justice system at large. Given that women and girls are disproportionately impacted as victims of trafficking, shortcomings also disproportionately impact individual women and girls globally.

As an inter-agency platform, ICAT’s mission is to facilitate policy coherence in addressing trafficking in persons by setting clear priorities, uniform standards, and by sharing expertise and best practices, and aiding States, civil society and practitioners in translating priorities into actions.

For more information on the history and rationale of the non-punishment principle at the international level, as well as the concrete, hands-on efforts that can be actioned for victims, download ICAT´s latest Issue Brief here.