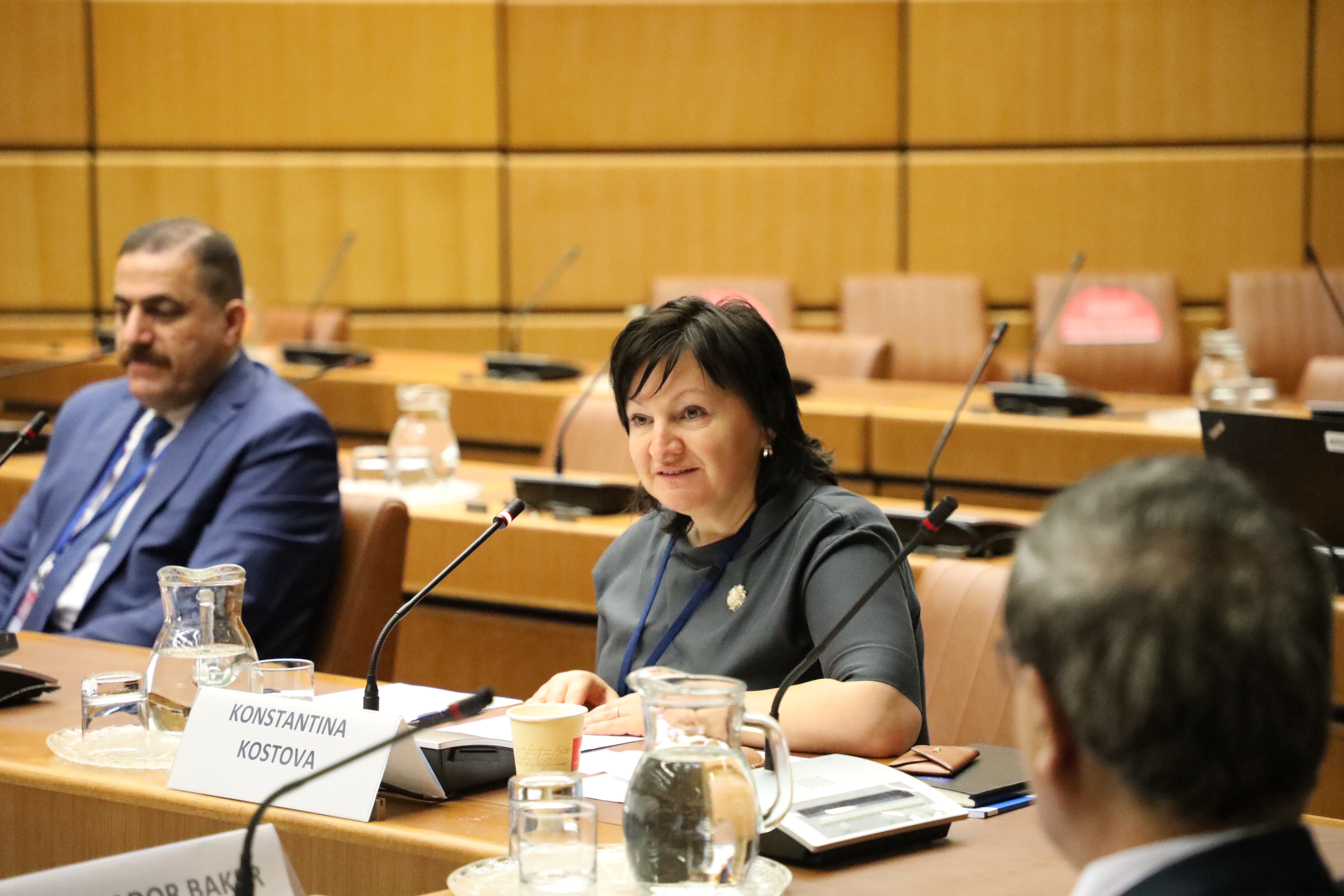 Vienna (Austria), 21 July 2021 - Senior Iraqi police officers have arrived in Austria to meet with experts from the United Nations Office on Drugs and Crime (UNODC) to exchange expertise and discuss ways to cooperate closer to tackle the crimes of human trafficking and migrant smuggling.

During the one-week visit, the officials will also spend time at the Joint Operation Office (JOO) of the Austrian Federal Police Authority, where they will learn about innovative investigative techniques and approaches to international police cooperation.

The JOO is the central anti-human trafficking and migrant smuggling agency in Austria. It works closely with other law enforcement agencies in Member States of the European Union and countries outside of the E.U., including Iraq.

Speaking at the opening event, John Brandolino, Director, Division of Treaty Affairs, UNODC said: “This meeting has taken months of planning and preparation, and I’m delighted that at last I can welcome you all here.”

Mr. Brandolino added that the Iraqi delegates had been invited “as part of UNODC’s work in support of the Government of Iraq to combat human trafficking and migrant smuggling” under the banner of UNODC’s E.U. funded GLO.ACT programme.

The Iraqi Ambassador to Austria and the United Nations in Vienna, Baker Fattah Hussen, said he was “pleased and grateful” for the coordination between Iraq and UNODC and that Iraq is committed to work “hand in hand” with UNODC to strengthen cooperation in various fields, especially in efforts to combat trafficking in persons.

The visit, which is the first of its kind, will allow the Iraqi delegates to discuss and compare methods of investigating human trafficking and migrant smuggling in Iraq and Austria.

They will also participate in intelligence exchange concerning criminal networks operating between Iraq and European countries.

Due to its geographical location, Austria is an important destination and transit country for victims of human trafficking and smuggled migrants.

The head of the Iraqi delegation, Waleed Khalid Ali Akbar Al-Bayati, Director General of the National Crime Control Division, Ministry of Interior stressed the importance of “exchanging experiences and joint coordination to limit the spread of transnational crimes”.

"The Ministry of Interior of the Republic of Iraq welcomes any initiatives that would develop prospects for international cooperation to achieve the best results for both our countries," he added.

In her remarks, Konstantina Kostova, Counsellor of the European Delegation to the International Organizations in Vienna, said human trafficking “is a crime that affects every country in the world” and “preys upon the vulnerable”.

She referred to the latest UNODC Global Report on Trafficking in Persons which highlighted the low rate of convictions for human trafficking globally.

“This operational exchange visit, that brings together a high-level group of decision-makers from law enforcement agencies, is very much welcome and could not be timelier,” said Ms. Kostova, adding that the E.U.’s Strategy on Combatting Trafficking in Human Beings 2021- 2025 highlights the need for urgent action to stop “this human rights violation and end impunity for perpetrators”.

In addition to working alongside colleagues from the Austrian police authorities, the Iraqi officials will cooperate with UNODC experts to draft Standard Operating Procedures for human trafficking and migrant smuggling investigations and develop tools that will be used to train Iraqi investigators.

There are reports that men and women from Asia and Africa, who migrate both legally and irregularly to Iraq, are subjected to forced labour as construction workers, security guards, cleaners, handymen, and domestic workers.

Irregular migration and migrant smuggling are commonplace throughout the Middle East, and Iraq is well documented as being a source, and to a lesser degree, a transit country for smuggled migrants. 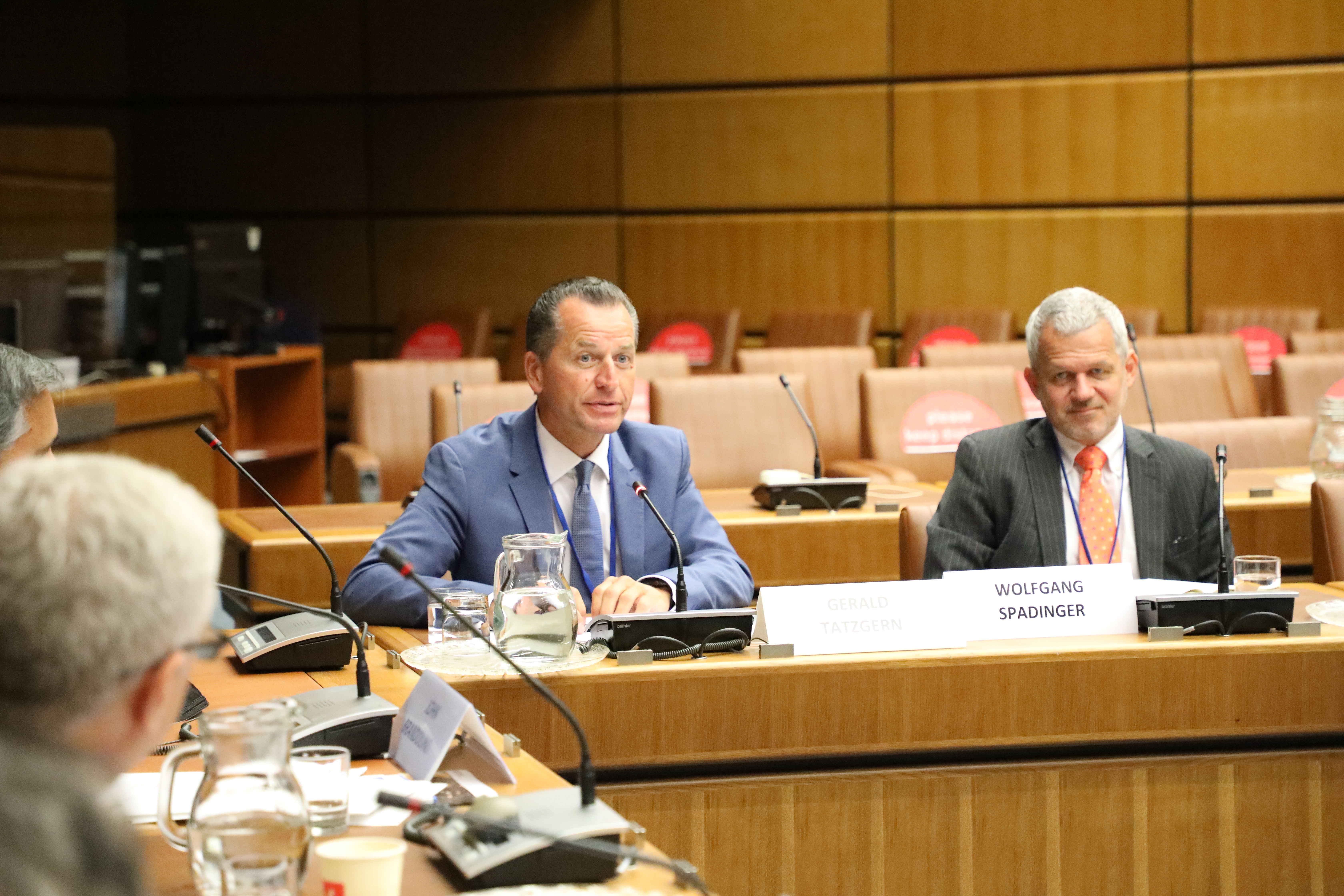 Mr. Gerald Tatzgern, Police Brigade General - Head of JOO & Mr. Wolfgang Spadinger, Director for Border Issues and the Fight against Trafficking in Human Beings at the Ministry of European and Foreign Affairs 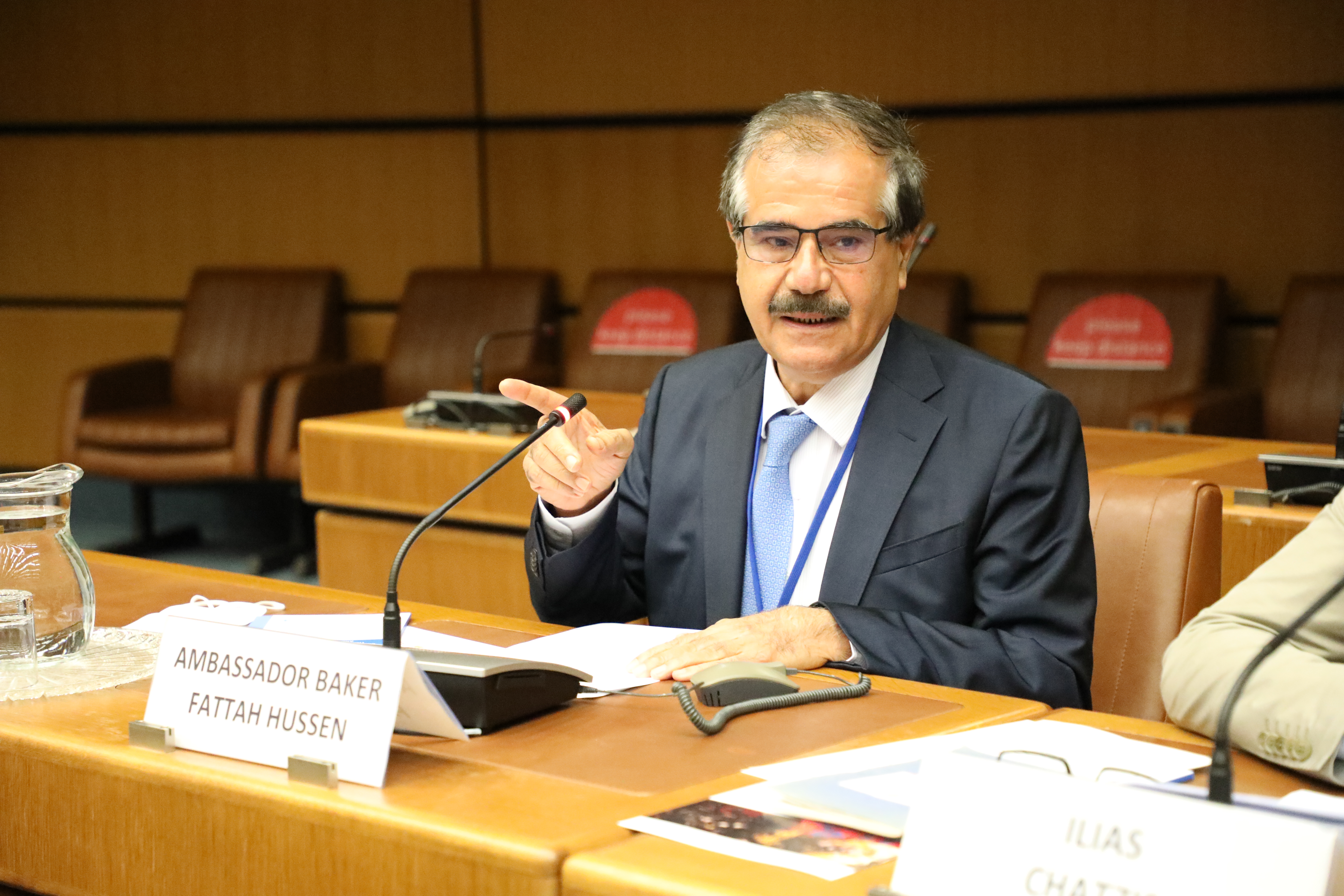 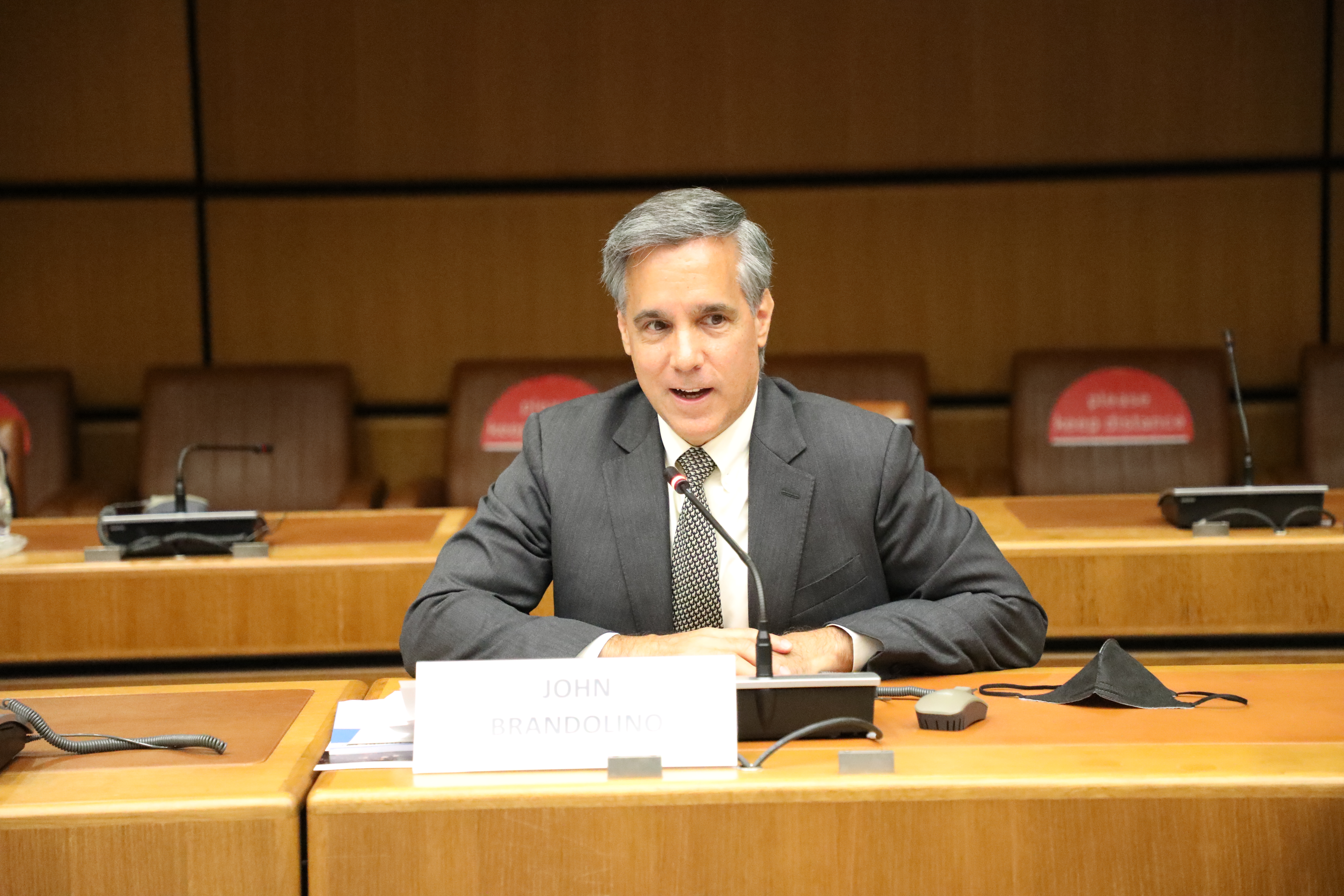 Mr. John Brandolino, Director of the Division for Treaty Affairs at UNODC 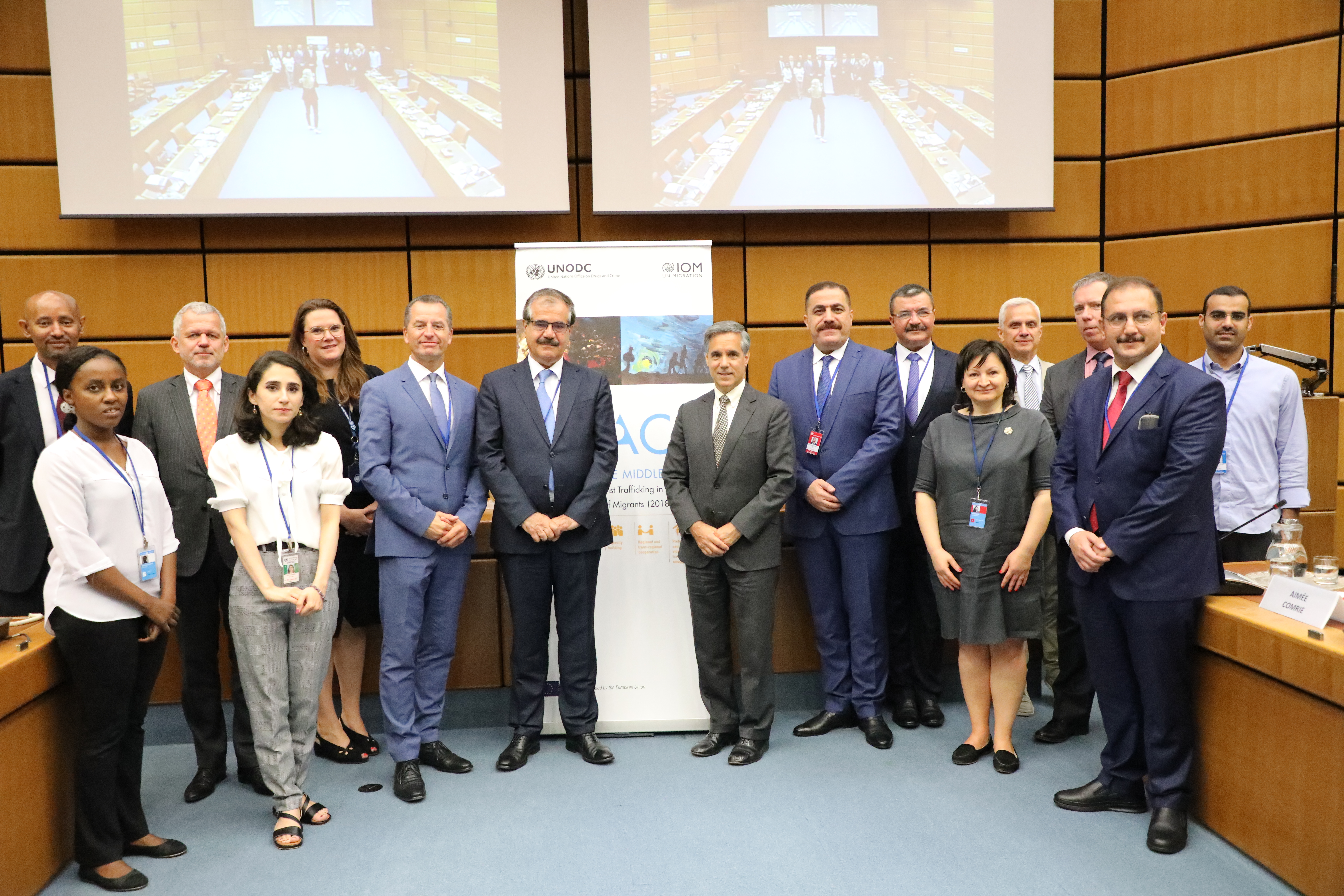