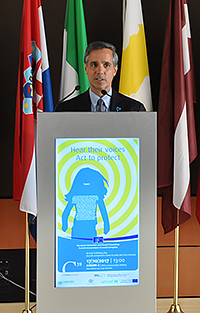 To mark the 11 th EU Anti Trafficking Day, GLO.ACT organized an exhibition entitled "Hear their voices. Act to protect."The exhibition and opening reception, hosted by the European Economic and Social Committee (EESC) on 17 October 2017 in Brussels, featured testimonies of victims of human trafficking. The testimonies have been obtained from countries around the world. The idea to display the testimonies on life-sized cutouts originated from an anti-trafficking awareness raising campaign in the Kyrgyz Republic, one of GLO.ACT's target countries. 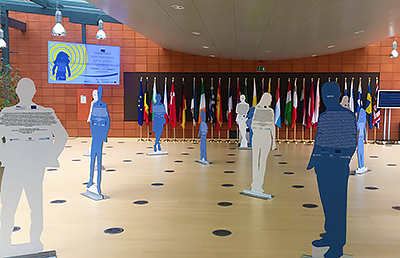 For the European Union, the main objective of EU Anti Trafficking Day is to raise awareness on trafficking in human beings and increase the exchange of information, knowledge and best practices amongst the different actors working in this field. Opening the exhibition, Mr. Gonçalo Lobo Xavier, Vice-President in charge of Communication EESC said, "The EESC is delighted to be able to support efforts in raising awareness about human trafficking so that more action to combat this crime will be taken."

Meanwhile, Mr. Jean-Louis Ville, (Acting) Director, DEVCO B - People and Peace, Directorate-General for International Cooperation and Development, stated during his remarks that "a victim-centred approach is at the core of the European approach to addressing human trafficking". He went on to say that "GLO.ACT is our flagship project on human trafficking, tackling problems in all regions of the world". In her role as EU Anti-Trafficking Coordinator, 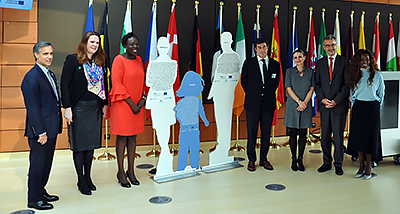 Ms. Myria Vassiliadou, gave an impassioned speech saying, "The exhibition is very important because it makes the invisible visible." However, she also reminded the audience that we must also shine the spotlight on the perpetrators and that we cannot forget the profit element as a key driver of trafficking in human beings. Concluding the round of opening speeches, Mr. John Brandolino, Director, UNODC, referred to the testimonies saying, "Their stories are real stories. They speak to the suffering that these victims have endured, but also to their courage and resilience."

Hear their voices. Act to protect. It is simple message but one with substance. We must listen to the voices of victims so that we can better prevent human trafficking, improve and strengthen our response and, most importantly, meet our obligations to victims.

Following EU Anti-Trafficking Day the exhibition will now return to Vienna, where it will be on display for United Nations Day on 24 October 2017, as well as during a benefit concert by UNODC Goodwill Ambassador Ozark Henry in support of victims of human trafficking. 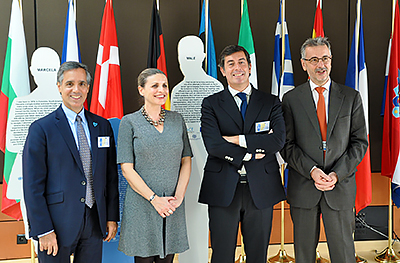 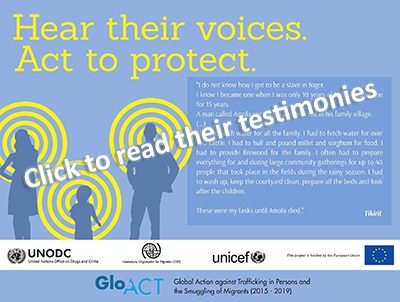