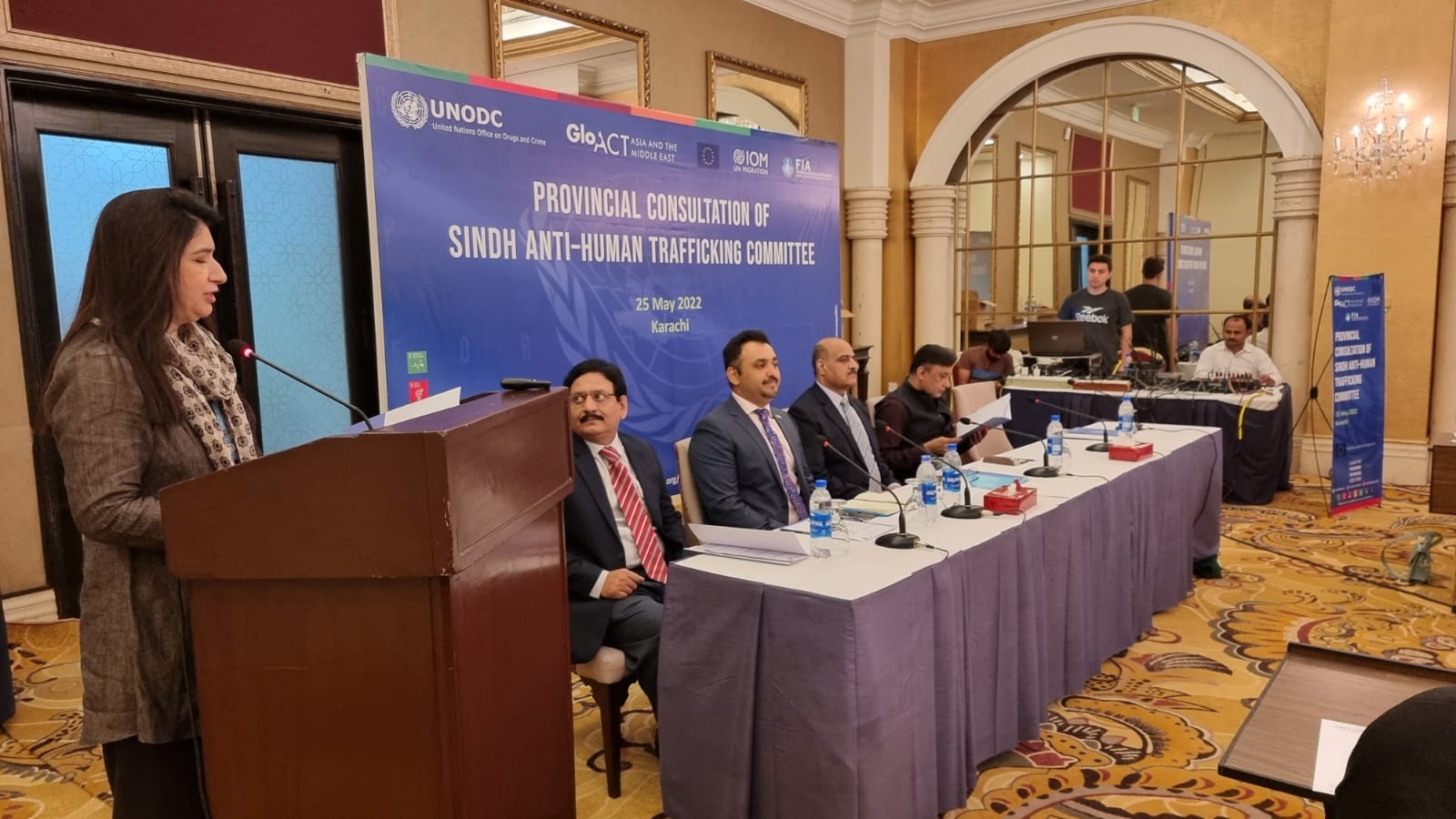 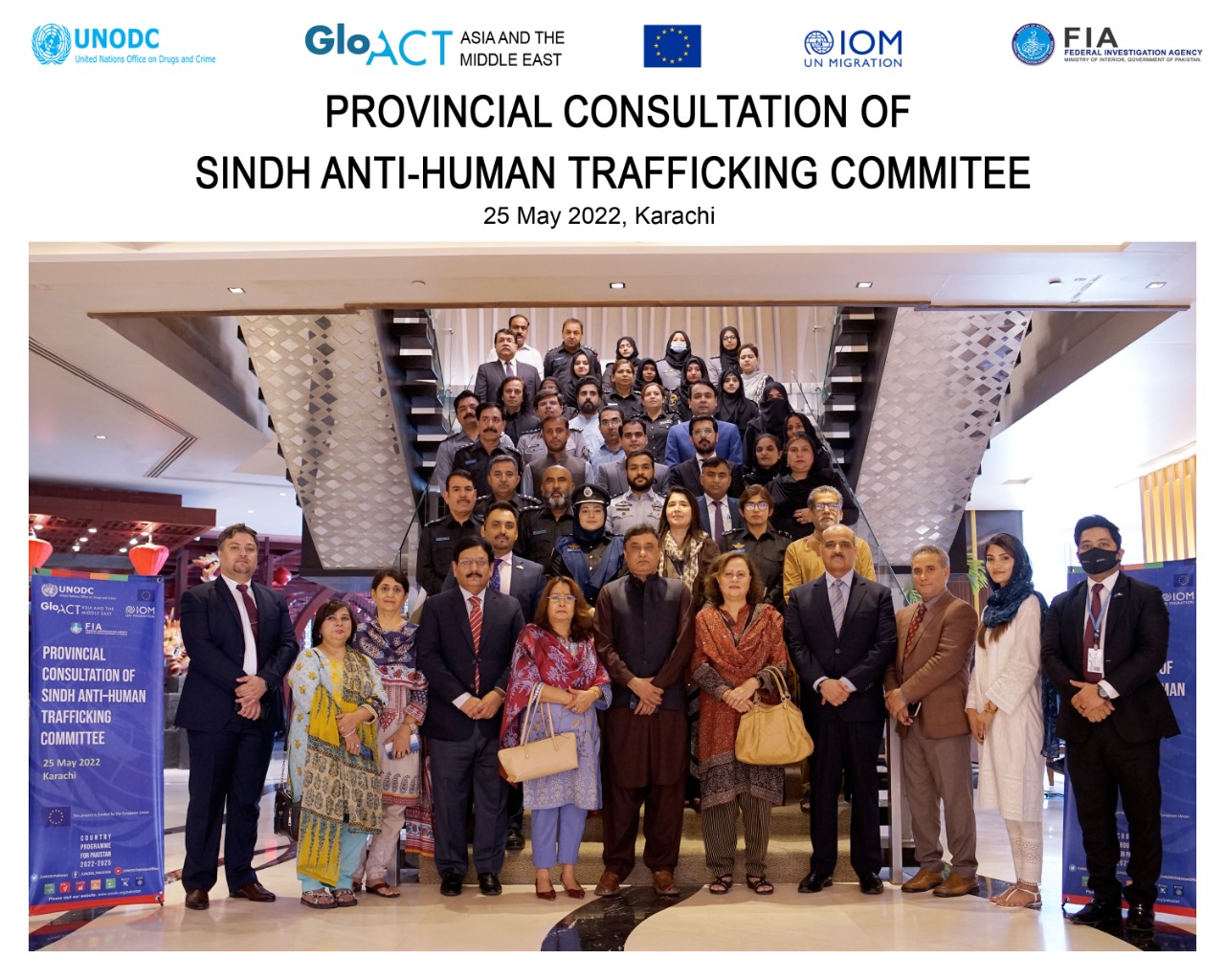 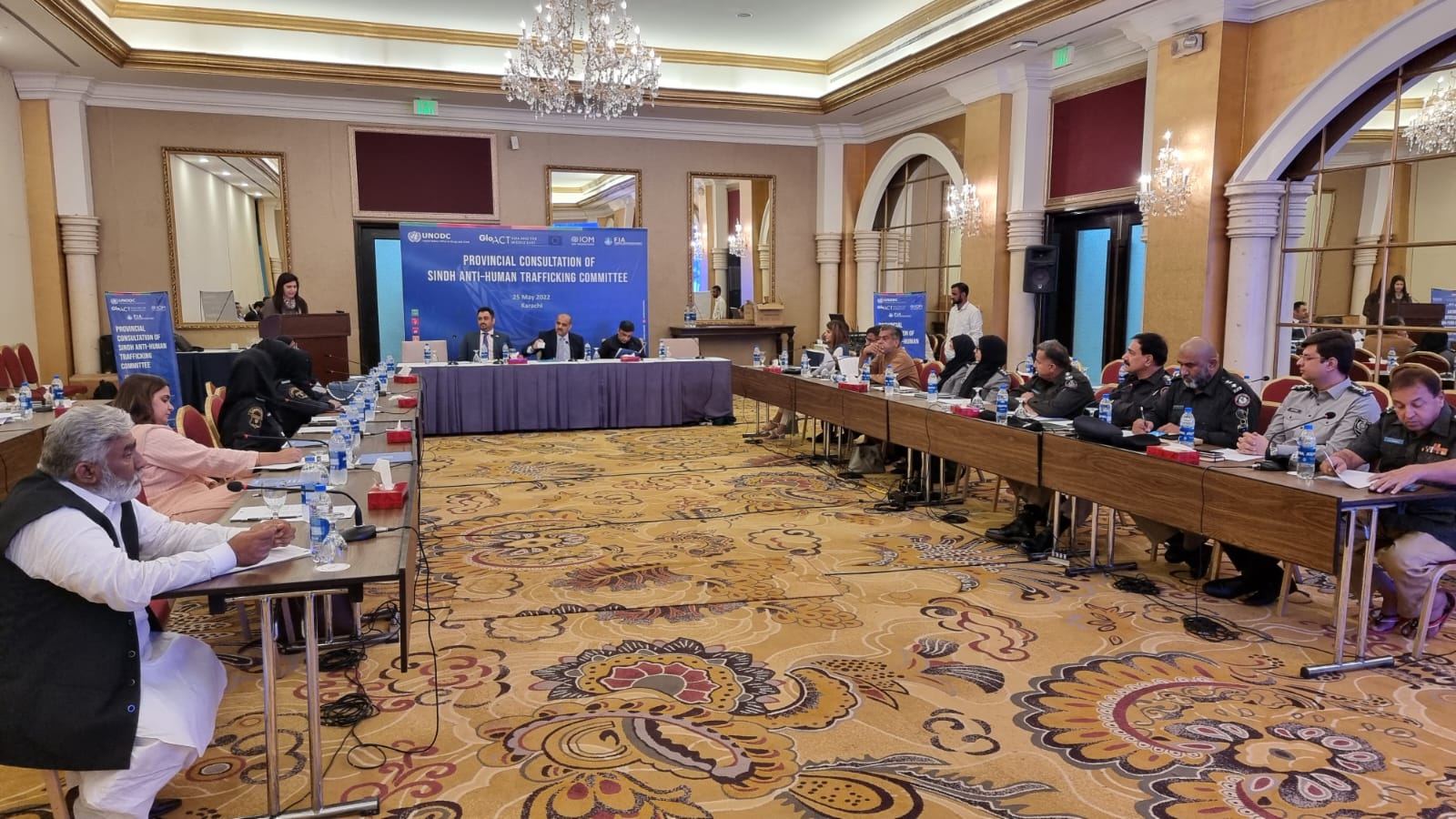 Karachi, Pakistan - 25 May 2022 – UNODC, under the framework of the EU funded GLO.ACT project and in collaboration with the Federal Investigation Agency (FIA), has been advocating with federal and provincial authorities to establish Trafficking in Persons (TIP) coordination committees across the country. As a result of this advocacy work, the government of Pakistan notified anti-human trafficking committees at both national and provincial level earlier this year.

The consultation provided a platform for all the relevant stakeholders to discuss issues related to human trafficking. It was an opportunity for all the committee members to meet and deliberate on their objectives. During the workshop, committee members were briefed on human trafficking, the enacted laws and the by-laws, and the importance of implementing robust monitoring and reporting systems.

Addressing participants, Shakeel Durrani, Additional Director General of the FIA,  said, "In Pakistan, a solid legal and normative framework is in place in the Prevention of Trafficking in Persons Act and its by-laws. Pakistan is also a signatory to the United Nations Convention against Transnational Organized Crime, which includes the first internationally agreed definition of the crime of trafficking in persons and provides a framework to effectively prevent and combat it. I am pleased to share that the government is working on ratifying the Protocols on TIP and SOM."

While delivering his keynote address, Special Secretary Home, Adnan Arshad Aulakh, said, "SOPs have been adopted by several provincial departments, including police and labor departments. These SOPs will assist the victims of trafficking. A hotline is also being established, allowing people to register their cases. We will try our level best to provide quick assistance through relevant counterparts. We thank UNODC for leading this initiative alongside the FIA  and guarantee our full commitment to this cause".

Honourable Mangla Sharma, Member of Provincial Assembly, Sindh, and the chief guest told the attendees: "Women and girls are targeted again and again and again. We see brutal sexual exploitation, including forced prostitution, forced marriage and sexual slavery. We see the appalling trade in human organs.

Smugglers often coerce and manipulate individuals for profit and make them victims of sex or labour exploitation. Terrorists and violent extremists use sexual enslavement as a tool for recruitment. She explained that "drug traffickers use kidnappings and ransom payments to finance their operations. Criminal gangs force unaccompanied children into a life of petty crime".

Meanwhile, in her remarks, Uzma Noorani, Managing Trustee Panah, said, "We must do better to prevent trafficking in persons by addressing what drives it. There has been significant progress in identifying and addressing many social, economic, cultural, and political factors that make people vulnerable to human trafficking, formulating comprehensive policies and programs, and developing educational and awareness-raising campaigns. At the same time, several of the drivers of vulnerability have worsened, like armed conflicts and forced migration. There is also a need for an honest and courageous examination of the cultural and ethical factors that fuel the demand to exploit other human beings, like the avarice that drives forced labour and the vast consumption of pornography that can be a driver of forced prostitution and foster sexually addictive behaviour. We need to be honest about what can lead to the commodification of another person as objects of gratification".

The Director OHS FIA, Sardar Zaheer Ahmed, during his presentation, said, "Under the enacted laws, the police is mandated to look at internal trafficking. The police have been designated to investigate this crime, including sexual exploitation, forced prostitution, trafficking for organ removal, and forced begging. The FIA is mandated to counter human trafficking across borders and migrant smuggling. The coordination and information sharing of all relevant actors, especially between the police and the FIA, is important".

Emphasizing the importance of victim protection and assistance, Amir Farooqi, Director Sindh, stressed, "We must focus on implementing existing legislation and the national action plan to combat human trafficking and migrant smuggling. This includes providing policy orientation and strengthening the gathering and use of data and reporting on trafficking in persons and smuggling of migrants".

He further added, "We must pay particular attention to human rights violations against trafficking victims and vulnerable smuggled migrants by working together to put in place a national referral mechanism that will help to identify victims and provide protection and assistance to them, while at the same time prosecuting and punishing traffickers and smugglers".