A Compendium of Best Practices: UNODC launches Toolkit to Combat Smuggling of Migrants 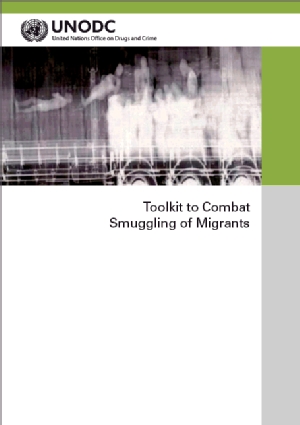 In light of the continued need for a comprehensive response to the smuggling of migrants, United Nations Office on Drugs and Crime's (UNODC) activities on smuggling of migrants have significantly developed in the past year with the elaboration of a number of tools to assist States in implementing the Migrant Smuggling Protocol. UNODC's Basic Training Manual on Investigating and Prosecuting the Smuggling of Migrants was launched during a side-event to the 19 th Annual Crime Commission held in Vienna 17-19 May 2010, and on 01 December 2010 the Model Law against the Smuggling of Migrants was officially launched online.

The Toolkit to Combat Smuggling of Migrants is designed as a compendium of promising practices that States can adopt as measures to counteract organized criminal syndicates, address the vulnerability of smuggled migrants, amongst the many other factors that States face in implementing the Migrant Smuggling Protocol. It seeks to provide guidance, showcase promising practices and recommend resources. The Toolkit has been prepared to serve a two-fold purpose:

The Toolkit is divided in thematic areas addressed by the following Tools:

The independent tools have been structured, and cross- referenced in a manner that allows users to easily access information that is relevant in a specific aspect of migrant smuggling. The Toolkit should be used as a complementary component to the other tools developed by UNODC.

Recognizing the ever-changing modus operandi of the smuggling criminal networks and the improvement of responses by relevant authorities, UNODC encourages users to contribute to the update, improvement and development of the upcoming editions by returning the feedback form at the end of the Toolkit.

It is hoped that the guidance offered, the practices showcased and the resources recommended in this Toolkit may inspire and assist policymakers, law enforcers, judges, prosecutors, victim service providers and members of civil society in playing their role in the global effort to combat migrant smuggling.

The Toolkit is currently available in English and will be translated in Arabic, French, Russian and Spanish.

The Toolkit to Combat Smuggling of Migrants was made possible through funding received from the European Union.

Protocol against the Smuggling of Migrants by Land, Sea and Air, supplementing the United Nations Convention against Transnational Organized Crime (link to Protocol)