The UNODC Regional Office for Southern Africa, under its joint Regional Programme with the Secretariat of the Southern African Development Community, has been working closely with the Government of Zambia to develop forthcoming counter-trafficking initiatives. UNODC is officially launching a new cooperation project and expanding its presence in Zambia, through which the organization will be able to more actively provide technical assistance to the country in its counter-trafficking response.

H.E. Fergus Cochrane-Dyet, UK High Commissioner, highlight that there is a significant trafficking in persons problem in Zambia, which is a source, transit, and destination country for men, women and children subjected to forced labour and sexual exploitation. However, he commended the new project, and said he was delighted that it is receiving funding from the UK. Mr. Cochrane-Dyet further congratulated UNODC and the Zambian Government on this promising new partnership. In the framework of this new project, UNODC will provide more strategic and effective support to the Government of Zambia in its fight against this crime, which will in turn benefit neighbouring countries as well. 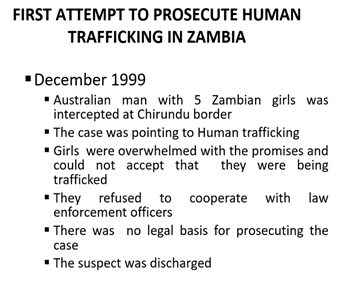 At the event, the UNODC Regional Representative for Southern Africa, Zhuldyz Akisheva, stated that the scale of the problem is of such an alarming dimension that it requires rigorous and concerted actions by relevant national authorities, communities, traditional leaders, civil society organisations, as well as cross-border cooperation with neighbouring countries. Ms. Akisheva highlighted that, since 1999 when police were unable to obtain a TIP conviction (see left), the Government of Zambia has made significant efforts to combat trafficking in persons within the country, and that "with this new project, we now have the opportunity to scale up and strengthen our work in Zambia against trafficking in persons to further build upon the success of the government's efforts. We will accomplish this as part of the UN country team in Zambia to contribute to the UN-Government partnership for domestication of the Sustainable Development Goals." Ms. Akisheva commended Zambia in dealing with tip since 1999. 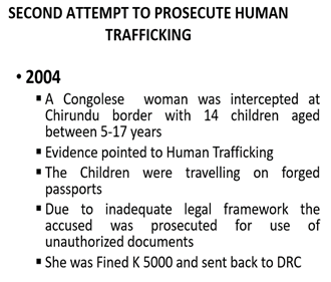 Janet Rogan, UN Resident Coordinator, stated that "no single response can end this crime of trafficking in persons -it needs all of us, the Government of Zambia, the UN family, media, traditional and faith-based leaders, as well as private citizens to join together in order to combat it." She went on to state that "the UN is proud to support this new joint programme, throughout the country and in the region."

In the keynote address, Honourable Stephen Kampyongo, Minister of Home Affairs, stated that he was honoured to officiate this very important occasion to launch the UNODC-Zambia cooperation project on trafficking in persons, and reaffirmed his Government's commitment to UNODC in fighting human trafficking in Zambia, and stated that "my office stands ready to further support all efforts in combating human trafficking in Zambia and borders beyond." To increase local ownership and the sustainability of the intervention in Zambia, UNODC will coordinate with the National Inter-ministerial Coordinating Committee on Human Trafficking, chaired by the Ministry of Home Affairs. 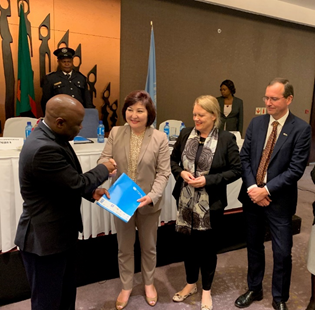 The project has four specific objectives: 1) to support Zambia to develop and/or strengthen and implement 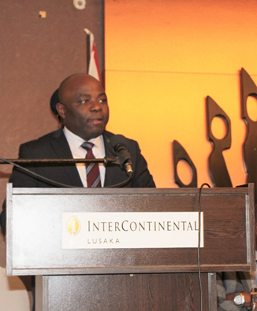