The History of the Rules

The history behind the United Nations Standard Minimum Rules for the Treatment of Prisoners (the Nelson Mandela Rules) spans decades and continents. The intention was to formulate minimum conditions that are accepted by the international community as a whole – even though prisons and prison management vary significantly across the world.

The United Nations (UN) has always been concerned about the plight of prisoners and the complex responsibilities of prison staff. That is why back in 1955, UN Member States adopted the Standard Minimum Rules for the Treatment of Prisoners (SMRs) during the first UN Congress on the Prevention of Crime and the Treatment of Offenders. For more than 60 years, these rules were the universally acknowledged standards for the management of prison facilities and the treatment of prisoners. They had tremendous influence on the development of prison laws, policies and practices across the globe.

As international law and the understanding of the penal process and human rights developed, UN Member States recognized that the SMRs would benefit from a review. In 2011, the UN General Assembly established an inter-governmental Expert Group to update the SMRs for the 21st century without lowering any of the existing standards. From 2012 until 2015, Member States discussed the nature and scope of the revisions with the help of the United Nations Office on Drugs and Crime (UNODC). Civil society and other relevant international organizations were also invited to contribute.

After analysing advances in international law, penal science and good prison management practice since 1955, the Expert Group proposed revising more than one third of the original rules across nine thematic areas: prisoners’ dignity as human beings; vulnerable groups of prisoners; health-care services; restrictions, discipline and sanctions; investigations of death and torture in custody; prisoners’ access to legal representation; complaints and inspections; prison staff training; and updated terminology. In December 2015, the UN General Assembly adopted by consensus the revised UN Standard Minimum Rules for the Treatment of Prisoners. They were named the “Nelson Mandela Rules”, in honour of the late president of South Africa who was imprisoned for 27 years due to his struggle for justice and human rights.

The Nelson Mandela Rules are “soft law”, which means they are not legally binding. National law takes precedence. But this does not mean they don’t matter. The UN General Assembly, which represents the international community, has adopted them as universally agreed minimum standards. Many UN Member States have incorporated the provisions of the rules into their domestic laws or are in the process of doing so. Furthermore, the judiciary in your country may use the rules as a secondary source when adjudicating the constitutionality of national prison practices. 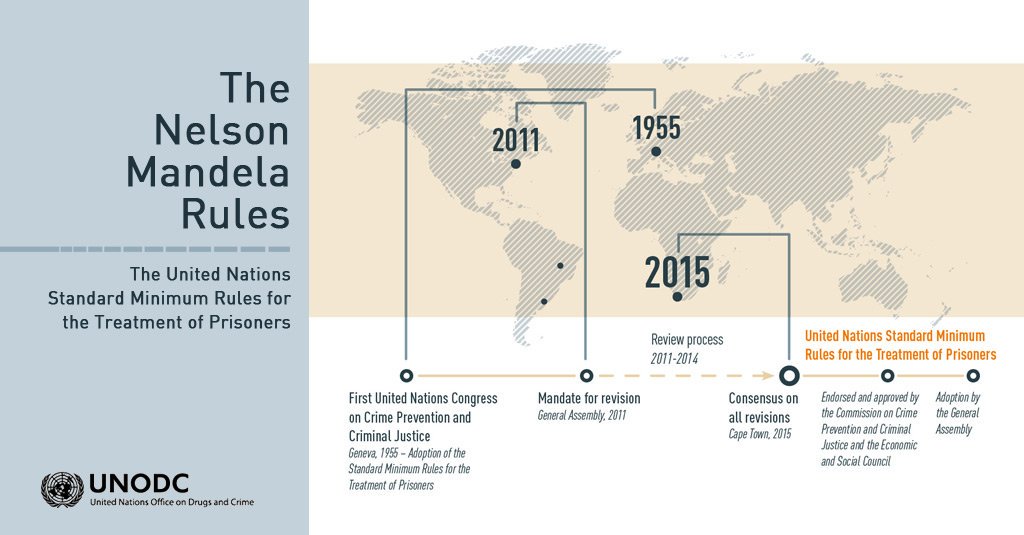