Working together against corruption in Southeast Europe 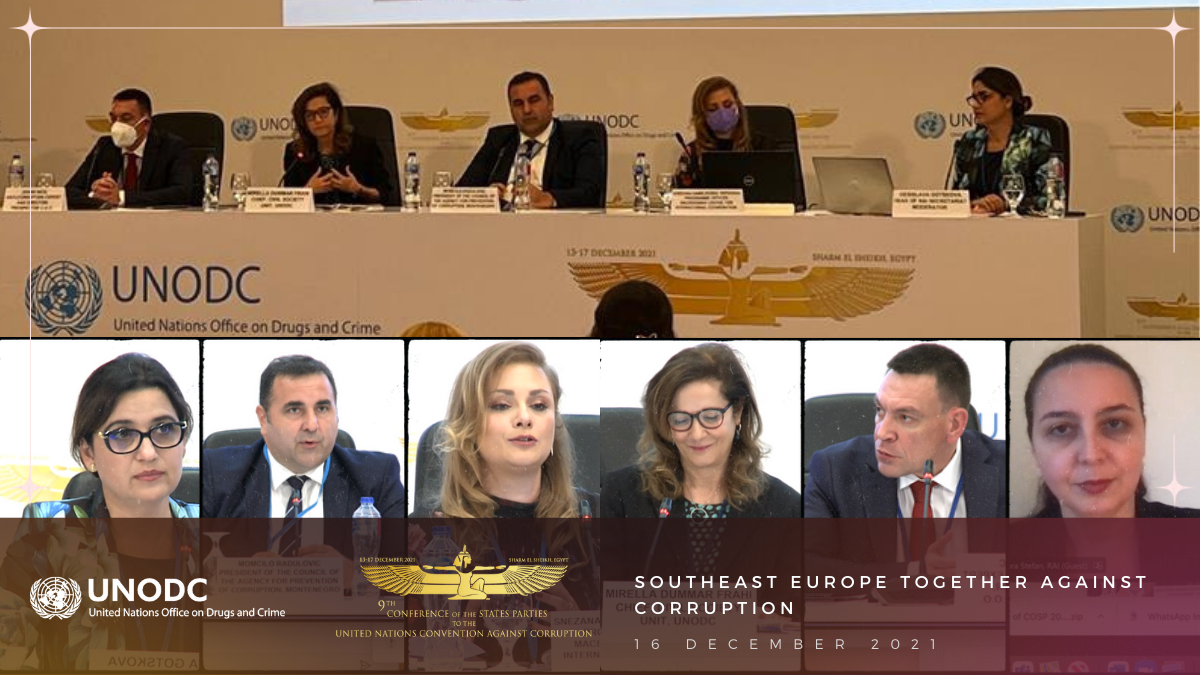 Sharm El-Sheikh (Egypt), 16 December - The special event ‘Southeast Europe TOGETHER Against Corruption’ once again emphasized the importance of working together in the fight against corruption. The hybrid event was organized under the auspice of the Regional Programme “Southeast Europe – Together Against Corruption (SEE-TAC)” implemented by the Regional Anti-Corruption Initiative and the UNODC Civil Society Unit with the support of the Austrian Development Cooperation.

This special event was a platform for different stakeholders from across the SEE region to engage in meaningful conversation about the best recipes for cooperation and partnerships. The added value of the multi-stakeholder workshops on the UN Convention against Corruption was discussed as well as the exchange of data in asset disclosure and conflict of interest, and other relevant endeavours in the region, which could be replicated and extended to the other parts of the word.

Moderating the session Desislava Gotskova, Head of RAI Secretariat underlined that it is essential to unite under the idea of ‘togetherness’ when working on anti-corruption initiatives in Southeast Europe.

Momcilo Radulovic, President of the Council of the Agency for Prevention of Corruption Montenegro acknowledged that multi-stakeholder cooperation is essential to counter corruption. “It’s important to have civil society and media next to us and we have listened to NGO advice and implemented their ideas and proposals in our everyday work”, - he said.

Mirella Dummar Frahi, UNODC Chief Civil society unit highlighted the work of her Unit aiming to bring together governments, civil society and the private sector to advance the implementation of the United Nations Convention against Corruption (UNCAC). This with the twofold aim of increasing knowledge and building trust among stakeholders. She also referred to the UNODC Regional Programme for South Eastern Europe, which provides the framework for UNODC initiatives throughout the region.

Representative of civil society – Snezana Kamilovska Trpovska, Programme Officer, Macedonian Centre for International Cooperation, stressed that the fight against corruption as it is not only for the governments but also for citizens. “At the same time, the CSOs should be perceived as one of the main partners” - emphasized Kamilovska Trpovska.

The perspective from private sector was presented by Jovan Nicic, Anti-corruption expert and Director of Prospector d.o.o., who told about their work on the ground level and mentioned the need to take collective action in countering corruption.

Laura Stefan, RAI Chairperson concluded saying that we can only succeed if we mainstream anti-corruption to the public.

Regardless of the field of expertise, sector or country, all stakeholders should work towards a common goal: curbing corruption while partnering with peers. This approach will remain at the core of the ‘Southeast Europe TOGETHER Against Corruption’ programme, running until 2023.