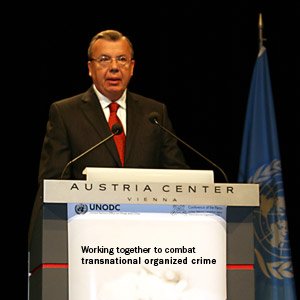 The Organized Crime Convention and Protocols supplementing it provide the framework for UNODC's work against transnational organized crime. As the guardian of the UNTOC, UNODC has a vital role to play in mainstreaming its criminal justice and security mandates into the UN system at large, and in assisting States in translating their commitments into actions.

The work of UNODC aims to balance long-term institutional capacity building objectives (for example though building legislative and regulatory frameworks in line with international conventions, standards and norms), and working in partnership with States to implement policy priorities and strategies in a tangible and impact-oriented way.

To these ends, UNODC assists United Nations Member States in the ratification and implementation of the UNTOC and its supplementary protocols. UNODC assists States parties to adopt legislation to capture criminal offences addressed by the Convention, to establish frameworks for mutual legal assistance and extradition, and foster law enforcement cooperation.

UNODC works closely with national governments, international organizations and civil society groups to enhance international cooperation and build capacity to counter organized crime though the development and implementation of national, regional and global programmes. UNODC plays a vital role in supporting international cooperation, by establishing connections and channels of communication between relevant authorities and offering forums for experts to meet to strengthen trust between them and exchange best practices and lessons learned.

UNODC is also active in data collection, research and analysis, acting to determine the most effective methods for collecting information about organized crime at the national, regional and international level, so it can appropriately adapt technical assistance projects and ensure that such information is appropriately disseminated in order to strengthen evidence-based responses to organized crime.

The underlying aim of all of UNODC's efforts is to have a real impact on people, by enhancing their security, productivity and quality of life.

The Protocols on Trafficking in Persons, the Smuggling of Migrants and the Illicit Manufacture and Trafficking of Firearms

Trafficking in persons is a transnational organized crime involving an act of recruiting, transporting, transferring, harbouring or receiving a person through the use of force, coercion or other means, for the purpose of exploiting them. The contexts in which victims of trafficking are exploited vary from sexual exploitation to forced labour or other services, slavery or similar practices, servitude or even organ removal. Every year, thousands of men, women and children fall into the hands of traffickers, in their own countries and abroad.

The United Nations Protocol to Prevent, Suppress and Punish Trafficking in Persons, especially Woman and Children (Trafficking in Persons Protocol) supplementing the Organized Crime Convention, is the first universal instrument to define trafficking in persons. It offers States parties a comprehensive definition of the crime and a comprehensive approach to combating it, with stated purposes of prevention of trafficking, prosecution of traffickers and protection of victims.

UNODC also leads or coordinates a number of initiatives that stem from its status as the guardian of this Protocol. It plays a coordinating role within the Inter-Agency Coordination Group against Trafficking in Persons ( ICAT), is the financial administrator, host and a Steering Committee member of the United Nations Global Initiative to Fight Human Trafficking ( UN.GIFT) and fund manager of the United Nations Voluntary Trust Fund for Victims of Trafficking in Persons, Especially Women and Children.

Virtually every country in the world is affected by the crime of smuggling of migrants, whether as an origin, transit or destination country for smuggled migrants by profit-seeking criminals. Smuggled migrants are vulnerable to life-threatening risks and exploitation. Thousands of people have suffocated in containers, perished in deserts or dehydrated at sea. Generating huge profits for the criminals involved, migrant smuggling fuels corruption and empowers organized crime. Where criminal justice responses focus on irregular migrants rather than on the criminal groups who smuggle them, the phenomenon continues to have negative economic and social implications for affected societies and sometimes at the cost of human life.

The Protocol against the Smuggling of Migrants by Land, Sea and Air (Smuggling of Migrants Protocol) supplementing the UNTOC is the primary source of States' responsibilities to prevent and combat migrant smuggling, protect the rights of smuggled migrants and promote international cooperation in this regard and offers a legal and conceptual framework for doing so at a global level. Article 3 of the Protocol requires criminalization of "…the procurement, in order to obtain, directly or indirectly, a financial or other material benefit, of the illegal entry of a person into a state party of which the person is not a national". The Protocol additionally requires States to criminalize producing, procuring, providing or possessing fraudulent travel or identity documents when done for the purpose of enabling smuggling of migrants.

UNODC works to promote global adherence to the Smuggling of Migrants Protocol, and assists governments in their efforts to effectively implement it. UNODC's response focuses on assisting States to bring their legislation in line with the Protocol and in developing effective criminal justice responses to the crime.

More information about the Smuggling of Migrants Protocol and UNODC's work against smuggling of migrants.

Firearms are high profit commodities frequently trafficked illegally and often a major means though which illegal armed groups and criminal organizations perpetrate and strengthen their power. Illicit trafficking of firearms finds its victims in armed conflicts, among youth in regions with high crime rates and violence, and even among women in domestic violence situations.

The Protocol against the Illicit Manufacturing of and Trafficking in Firearms, their Parts and Components and Ammunition (Firearms Protocol) supplementing the Organized Crime Convention seeks to promote, facilitate and strengthen State capacity to effectively regulate firearms and ammunition, control their transfers, prevent and combat their diversion into the illegal market, and enhance cooperation among States to these ends.

UNODC assists Member States in the implementation of the Firearms Protocol in an integrated and coherent manner, though preventative and control measures, evidence-based research, the development of legal and technical tools, legislative assistance, capacity building and international law enforcement and judicial cooperation for enhanced investigation and prosecution of crimes relating to illicit manufacture and trafficking of firearms.

Also see Tools and Publications and Contact Us for more information.