Men and women are involved with and affected by terrorism differently. Women can actively and voluntarily support terrorist groups and are involved in the commission of terrorism-related offences, although often serving in different roles than men. At the same time, terrorist groups specifically target women through acts of sexual and gender-based violence – such as rape, sexual slavery and forced marriage – as a means of achieving their aims. Women may also face gender-specific difficulties when attempting to access justice and seeking remedies as victims of terrorism.

Despite the many ways in which women are affected by terrorism, in many countries, men dominate the responses to terrorism who are not always well placed to consider the needs and views of women. Therefore, promoting women’s equality, human rights, and voices are essential elements in long-term efforts to comprehensively address terrorism and violent extremism.

We work with national governments to move beyond gender stereotypes about the roles of women in terrorist groups, and put in place policies, laws, and criminal justice procedures that are informed by the experiences and concerns of women, including gender-sensitive investigation and prosecution approaches. For example, we have a close partnership with Nigeria and have worked together on gender responsive counterterrorism measures with significant results, including a break-through in a high-profile terrorism investigation.

Finally, we promote women’s equality, human rights, and voices as essential elements in long-term efforts to prevent terrorism and violent extremism. This includes promoting women’s leadership in national counter-terrorism and criminal justice agencies but also at the community level to empower women as key agents for change.

We have developed one-of-its-kind Handbook on Gender Dimensions of Criminal Justice Responses to Terrorism. It contains essential information on gender-adapted responses for judicial officials, prosecutors, law enforcement and corrections officers, and lawyers assisting suspects or victims of terrorism. It will also be useful to policymakers, lawmakers, and civil society organizations.

Legal and policy recommendations are provided, based on international standards and promising practices of international, regional and selected national bodies, in order to assist the users in addressing some of the key gender issues arising in the criminal justice response to terrorism. The handbook follows a multidisciplinary approach, integrating best practice from the different fields of expertise including the promotion of women’s rights and equality, and the elimination of violence against women.

Based on this Handbook and specifically for Nigeria, UNODC developed the Training Module on Gender Dimensions of Criminal Justice Responses to Terrorism, which was launched in December 2019. In 2020, in partnership with the National Association of Women Judges of Nigeria, more than 300 Nigerian judges and prosecutors received training based on this manual. 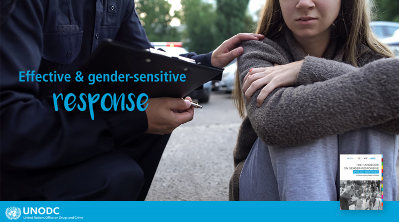 It is estimated that 63% of Yazidi community members who escaped or were rescued from Islamic State of Iraq and the Levant (ISIL) abductions in Iraq since 2014, are women and girls. Yet, women remain vastly underrepresented in the criminal justice and law enforcement institutions in Iraq.
Strengthening the participation of women is essential to ensure non-discriminatory and representative institutions capable of responding effectively to their diverse needs. Additionally, institutions improve their operational effectiveness when ensuring women’s perspectives are considered for designing strategies and preventing and countering terrorism.
Recognizing the different ways that women professionals are involved in and impacted by counter-terrorism efforts in Iraq, UNODC has been supporting strengthening the capacity of women professionals working in counter-terrorism in Iraq by conducting a research study on women in the criminal justice system.
This study provides a first of its kind overview of the current representation of Iraqi women professionals in counter-terrorism institutions. It sheds light on the efforts needed to:
NB. The study will be made available here in 2021.

In 2017, the United Nations General Assembly reconfirmed UNODC’s mandate “to assist Member States, upon request, in mainstreaming gender perspectives into criminal justice responses to terrorism, in full compliance with human rights law, in order to prevent the recruitment of women and girls as terrorists and promote the full protection of women and girls from any form of exploitation or violence perpetrated by terrorists.” (A/RES/72/194).